At Home on the River

At Home on the River
April 2015
WRITER:
Bridget Venatta
PHOTOGRAPHER:
Julia Lynn
With help from architect Bill Huey and interior designer Ginger Brewton, a Mount Pleasant family builds an elegant, nature-infused abode on the banks of the Wando


Growing up in the landlocked town of Burlington, North Carolina, Becky Joye never pictured herself living in a waterfront abode. “It’s just not something I ever thought would be in the cards for me,” she muses. Happily, it seems fate had other plans, as Becky delivers this comment from the living room of her clean-lined, color- and pattern-splashed Mount Pleasant residence, which she and husband Mark had built right on the banks of the Wando River. On this particular afternoon, a storm is brewing, and the striking view from the glass patio doors reveals choppy currents and grey skies. Water droplets pang the tin roof, filling the air with a rhythmic rain song. “That’s one of my favorite sounds,” she says. “I think it’s just so soothing.”

On clear days, those patio doors might slide open to invite the sunshine and fresh air inside. Or, Becky and her three-year-old son, Finn, might make their way down to the riverbank to hunt for fiddler crabs and paddle in their kayak. Rain or shine, life on the water is where Becky’s found the happily ever after she never knew she always wanted.

So how’d this Piedmont gal wind up loving life on a Lowcountry river? After attending the College of Charleston, Becky fell hard for the Holy City’s coastal charm. And years later, she fell in love again, this time with Mark, an area attorney and Charleston native who’d long dreamt of living on the water. The two wed in 2010 and, in 2011—with baby Finn on the way and Eliza, Mark’s 17-year-old daughter from a previous marriage, living with them part-time—they started hunting for a home by the sea, or by a river or marsh. “Mark was raised in Hobcaw, just a hop-skip away,” Becky notes. “He grew up playing in the creeks, so for him, it was very personal to think that his kids might be able to have the same upbringing.”

A seven-month search spanning several island communities and waterfront Mount Pleasant neighborhoods yielded a few contenders, but each needed serious renovations. “We were looking for an open floor plan, and we wanted lots of light,” Becky says. “And that was really proving difficult for us, which was a little bit surprising.” Though originally they didn’t want to build—“I’d never done it before, and it just seemed really intimidating,” Becky explains—the couple’s real estate agent suggested they check out an empty lot near Remley’s Point, an area of Mount Pleasant that’s slightly off the beaten path and hadn’t previously been on their radar. Almost as soon as they stepped out of the car, they were sold on the site, with its mature live oak trees and idyllic river views.

Realizing that building a house to their specifications might ultimately be easier than renovating, they took the plunge, bought the land, and enlisted architect Bill Huey and interior designer Ginger Brewton to help them create the home they envisioned. Becky immediately clicked with the Southern-born and Manhattan-trained Brewton, whose portfolio brims with the same sophisticated-yet-happy aesthetic she wanted to cultivate in her own décor. And Mark already had a solid relationship with Huey, who designed a residence for his parents years earlier. When Huey suggested Daly & Sawyer Construction to handle the building, their team was complete. “From the beginning, Ginger, Bill, and Michael Daly were working together to make sure everything translated,” Becky notes.

“They all collaborated and shared ideas, which made things seamless.”

To kick off the project, Huey worked closely with the Joyes to plan a layout with an open-concept floor plan. “I love to cook, and I don’t want to be separated from everybody,” explains Becky, who often has a pot of her signature Bolognese simmering on the stovetop or a batch of muffins baking in the oven. She appreciates how Huey’s design links the kitchen, dining room, and living room together into a continuous space that fosters family time. “This ends up being one big playroom for Finn, and hearing his and Mark’s voices while I’m cooking is all part of the experience of feeling at home,” she adds.

Still, there are a few secluded nooks tailored to more solitary moments. The couple’s master suite is set off by an archway that’s much smaller than the wide, rectangular doorways found throughout the more open living areas; its cozier scale signals a shift from public to private space. And Becky’s home office, a glam six-by-nine-foot jewel-box outfitted by Brewton in high-gloss green paint and cheetah-print wallpaper, is like a teeny windowless haven for the busy wife and mother. “I wanted it to be enclosed,” she says. “It’s my sweet little escape.”

Huey’s layout also invites the outside in courtesy of a sprawling porch accessible from three different rooms (the master suite, living room, and dining room). And wraparound windows in the kitchen ensure that whoever’s cooking doesn’t miss out on the vistas. “The whole back side of the house is huge glass doors and windows looking out on the water and the dock,” Becky notes. As a result, natural light—one of their original house-hunting “musts”—is here in spades. For Becky, who studied art history as an undergrad, it’s like inhabiting a piece by one of her favorite painters, the British Romanticist J.M.W. Turner. Each day, as the sun cycles through the sky, she’s often reminded of “the explosion of light that comes out of Turner’s works,” and she relishes living alongside such natural beauty.

With the layout established, Brewton helped the Joyes choose building materials and finishes that would suit the abode’s surroundings. Interior walls of white shiplap cultivate a clean but undeniably coastal feel, while hand-scraped floors and ceiling beams composed of reclaimed wood project an earthier vibe. This sense of balance is Brewton’s calling card. “To me, if a design is all modern or all traditional, it looks too staged, too contrived,” Brewton explains. “I do a lot of balancing the yin and the yang.”

To that end, Brewton built the furniture plan atop a base of clean-lined, neutral pieces, such as gray sofas by North Carolina custom-furniture company TCS and simple, elegant coffee and dining tables by area carpenter Brad Nietert. She then layered in more eye-catching touches that feel by turns mod, rustic, and glamorous—like the Sputnik-inspired chandelier in the dining area, textural driftwood fixture in the foyer, and blue-velvet upholstered headboard in the master bedroom, respectively. Throughout, the rooms are unified by pops of color pulled from the landscape (think lots of blues and golds), while splashes of pattern maintain visual interest.

Brewton also helped the Joyes find balance financially by advising on where to splurge and where to save. Though she guided them towards higher-end upholstered furnishings and luxe fabrics (“if you have really well-made upholstery pieces, they’ll last you forever,” she explains), she also sourced plenty of items from more affordable retailers—including the light fixture in Eliza’s room, from Ikea, and the Lucite nesting tables in the living room, Overstock.com finds. “Not all designers would be open to that, but she wasn’t afraid of the mix,” Becky notes. “That really enabled us to stay on budget.”

Meanwhile, the rain is lightening up. Becky peers out at the family’s johnboat anchored at the end of their backyard dock. Maybe the afternoon will bring sunny skies, and the family will head outside for an excursion to the nearby islet they’ve dubbed “Shark Tooth Island” for the wealth of fossils that wash up there. If not, they’re content to hang out indoors and perhaps watch the wildlife from their living room (they recently spotted two bald eagles in their backyard) or make a fire in the hearth that’s built into the screened-in portion of the back porch. “We use the porch all year long, and we feel like the dock is almost another extension of the living area, too,” Becky notes. “That’s the cool thing about living here—we see so much nature, and the house allows us to enjoy all aspects of the view.” 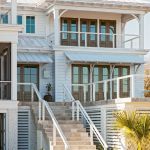 On Sullivan’s Island, a young family teams up with designer Cortney Bishop and architect and builder Oliver Dungo to conjure a fresh twist on the beach house with vistas for days