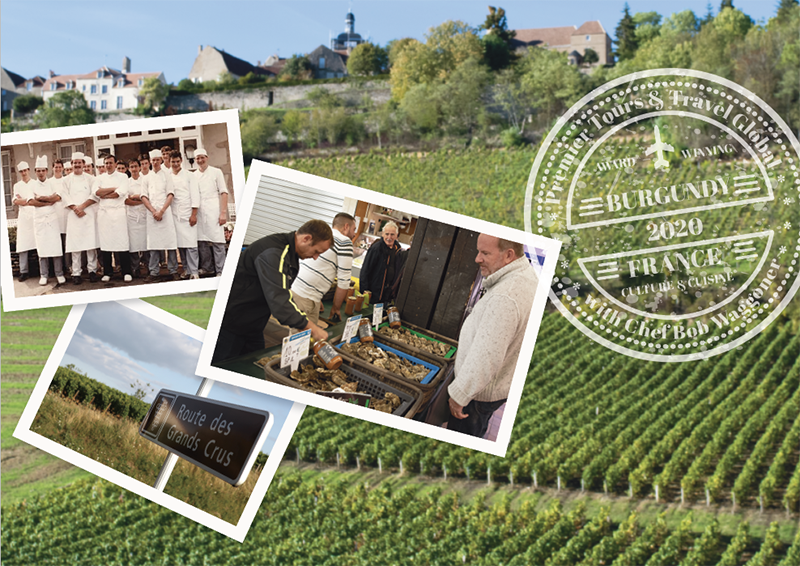 (Inset clockwise from top left) Chef Bob Waggoner circa 1980 at Maison Lameloise; Chef Waggoner enjoying an impromptu oyster tasting in the market; A welcome sign while traversing the Côte-d’Or

Premier Tours & Travel and Charleston culinary legend Chef Bob Waggoner have curated a very personal tour through the gastronomic heart of France this September, paying homage to the land, the food, and the Michelin-starred chefs who shaped his career

Burgundy, France holds a very special place in my heart. It’s where I threw caution to the wind to follow my dreams. It’s where I honed my culinary skills and discovered my lifetime passions: my wife and my daughter.” — Chef Bob Waggoner

Slightly more than two hours northeast of the birthplace of Michelin—the tire, the Guide, and the star—begins the Burgundy region, considered the culinary heart of France with its legendary cuisine and vineyards of UNESCO World Heritage status. From Clermont Ferrand, France, the brothers André and Édouard Michelin encouraged travelers as early as 1900 to visit the fine-dining establishments peppered throughout this region and donned the now-coveted Michelin star upon exceptional Burgundian restaurants as early as 1926. 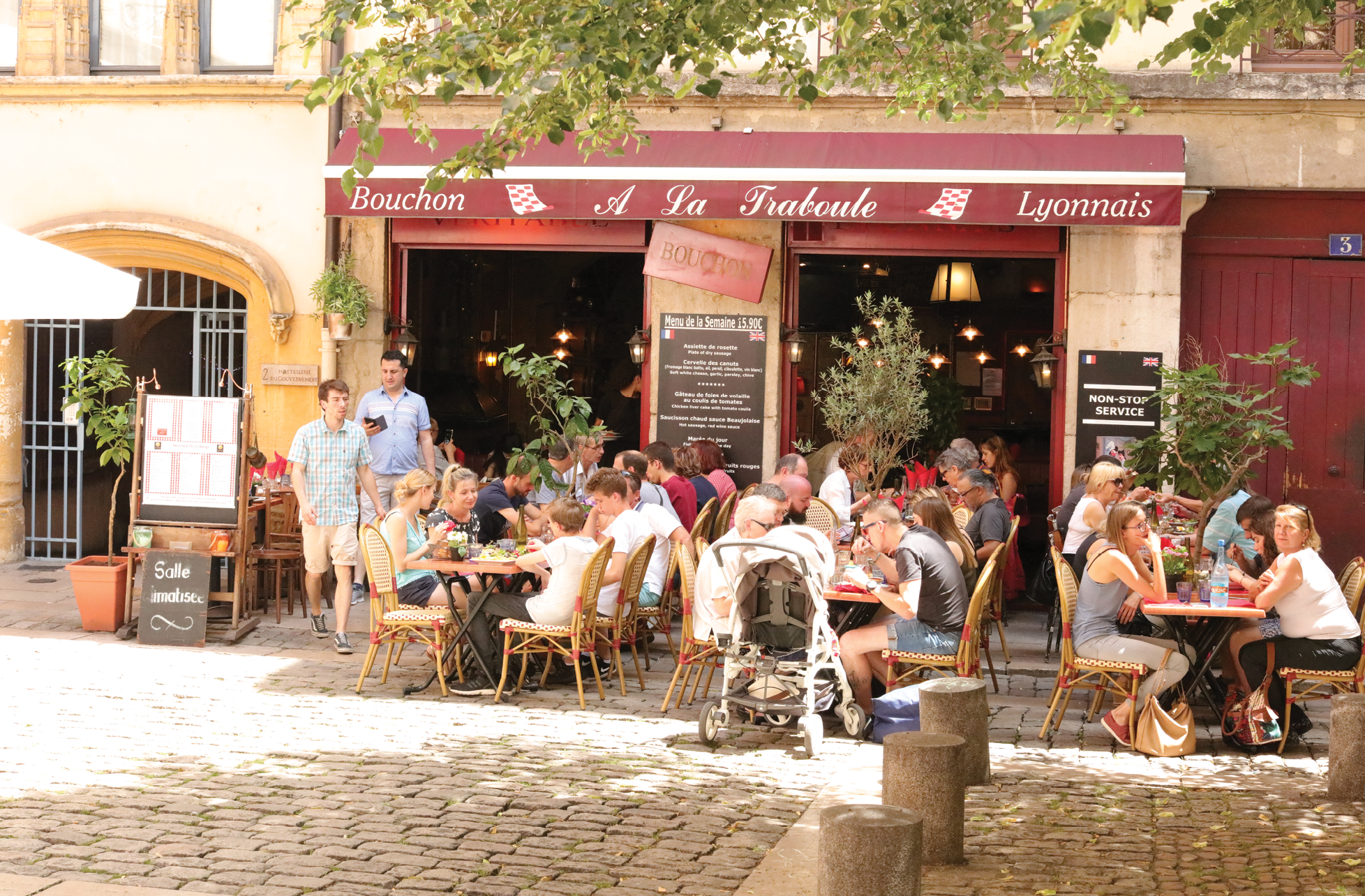 It is no wonder that the seemingly boundless epicurean possibilities of Burgundy enticed a young American named Bob Waggoner from California in the 1980s—with no visa, no official job, and no proficiency in French—to broaden his culinary knowledge in this gastronomic wonderland. It is also no wonder that he called France home for nearly a dozen years thereafter, having worked his way into the kitchens (and hearts) of some of the finest Michelin-starred chefs throughout France and the world—Pierre Gagnaire, Jean-Pierre Silva, Jacques Lameloise, and Mark Meneau to name a few. “Awesome food and wine aside, the Burgundy region of France has always been considered more bohemian, more rebellious and down to earth than, say, Bordeaux, which was a perfect match for me,” shared Chef Waggoner.

This fall, Waggoner—who was the first American chef to own his own restaurant in France and was later knighted by the French government—will be sharing his love of Burgundy, France, during a once-in-a-lifetime trip curated with Premier Tours & Travel. “I know this tour is going to be much more personal for Bob,” said Premier Tours & Travel President Maria Cartwright, who traveled with Chef Waggoner throughout the region hand-selecting five-star accommodations, iconic vineyards, historic sites, and culinary experiences. “With him having such deep ties to Burgundy, I feel we aren’t just curating a tour, we are creating a trip down his Michelin-starred memory lane. So, we are going to ensure it is star-studded. It is going to be very special for everyone.” 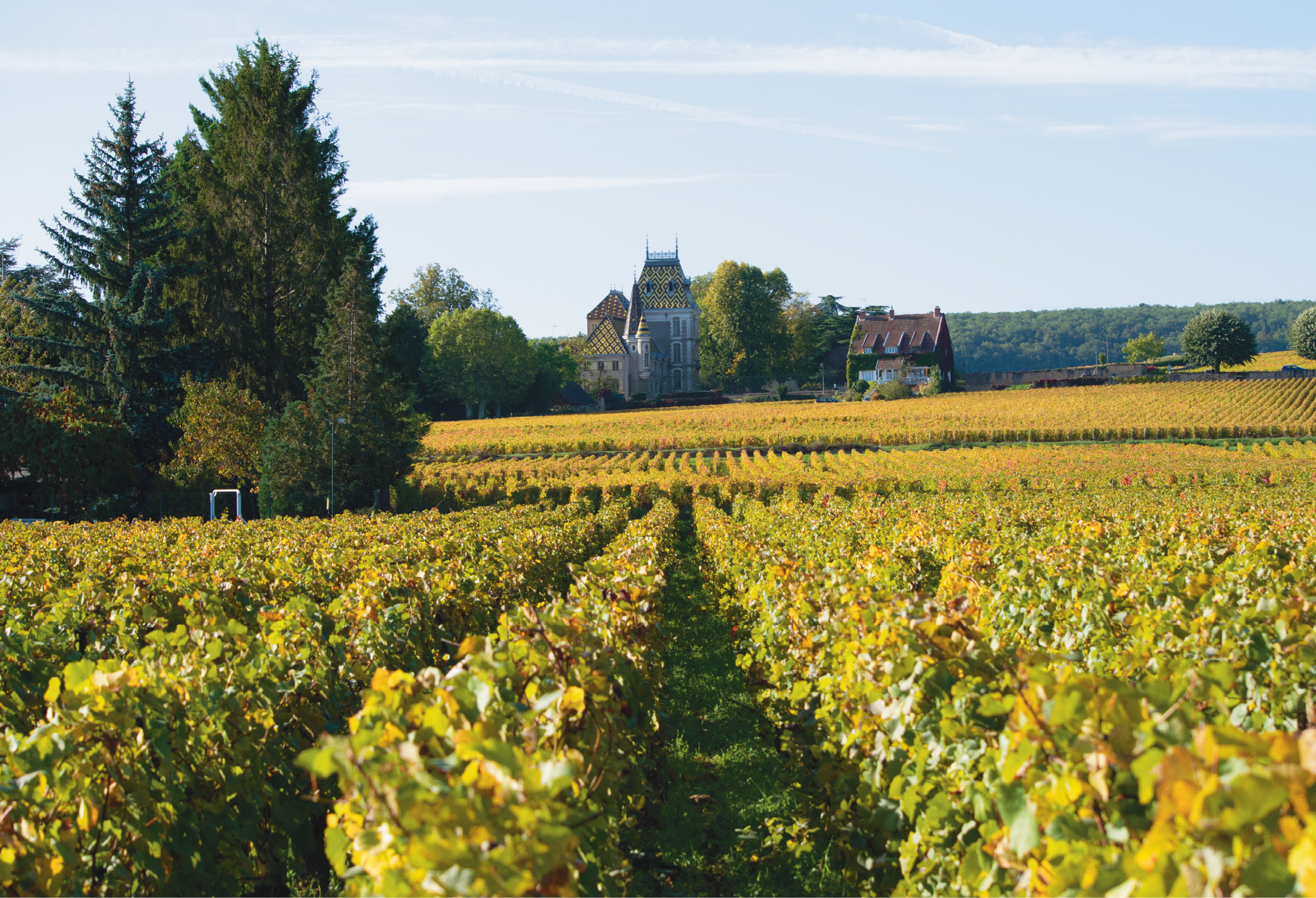 With every location—including Vescours, Maçon, Louhans, Beaune, Tournus, and Dijon in Burgundy, as well as the gastronomy capital of the world, Lyon, in the Rhône region—travelers will be regaled with Chef Waggoner’s wildly fun tales of his culinary adventures. During the tour’s advance site visits last fall, he told of 6 a.m. wine tastings at legendary vineyards to select wines for Chef Jean-Pierre Silva’s two-star Michelin restaurant, Hostellerie du Vieux Moulin, near Beaune; to being whisked away in a caravan of Citroen Deux Chevaux carrying the three-Michelin-starred kitchen team from Pierre Gagnaire restaurant in Saint-Etienne to experience lunch two hours away at another three-star Michelin restaurant, George Blanc; to creating the notorious cromesquis (foie gras, truffle, and port croquettes) for guests at Chef Marc Meneau’s three-Michelin-starred L’Ésperance. 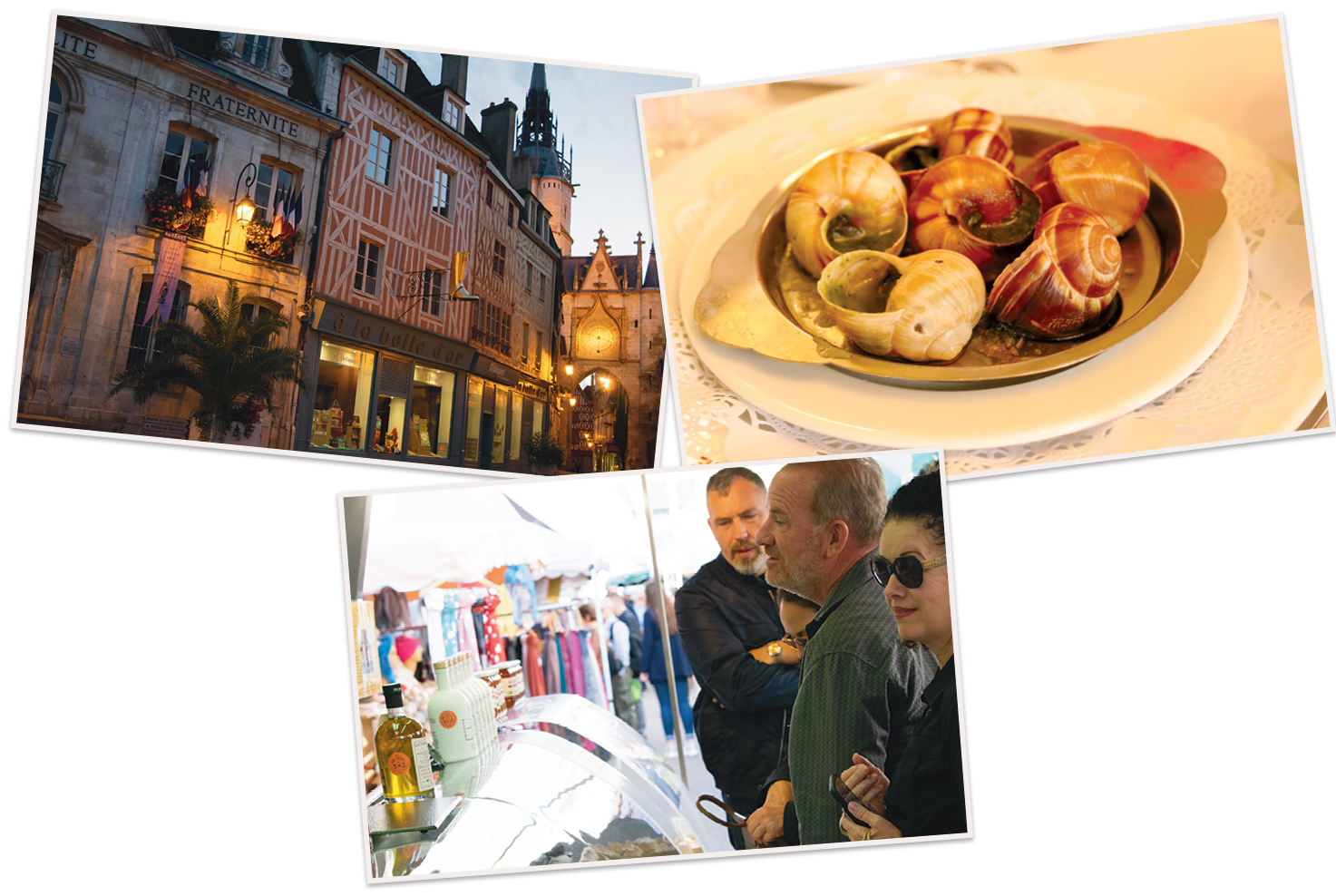 “I was an American working in some of the best kitchens in France, which was pretty much unheard of,” shared Chef Waggoner. “I had to prove to each of these legendary teams that I was good enough to be there.” So, the dedicated student came in early and stayed late, working every station and doing every task they needed no matter what. “And because I wasn’t being paid, I was usually the one who went on the morning trips to the market with the chefs. Even though it made for 15-plus hour days, it ended up being a highlight for me,” continued Waggoner, who would enjoy a morning glass of wine with his chef and the other chefs at the market before helping make selections such as Charolais beef, Bresse chicken, escargots, and Saint-Marcellin. “It’s where I learned respect for the product and the producer—we always made sure we brought a bottle of wine to our farmer, fishmonger, and cheesemaker each week to make sure we had top billing the next week.”

“The guests on our tour will always be two degrees away from some of the greatest Michelin chefs.” —Bob Waggoner

“With such priceless opportunities, it is easy to see how Bob’s love of food, wine, and joie de vivre was influenced,” Cartwright stated. “We are working to translate those into unique experiences, including a tour of and tastings at Le Cité de la Gastronomie, shopping at the largest market in Burgundy—the Louhans market, and experiencing lunch at a Michelin-starred restaurant such as Maison Lameloise in Chagny.” Waggoner added, “It’s my goal to bring as many techniques and ingredients from my time in Burgundy to the kitchen at Château de Montsymond…the amazing chateau where we will be staying with our guests.

“To me, it’s like that six degrees of separation idea,” Waggoner continued. “Whether Maria has us shopping in the best markets, tasting wine with my good friends at Domaine Louis Latour, dining out in an awesome bouchon in Lyon, or eating Chef’s dinners at the chateau, the guests on our tour will always be two degrees away from some of the greatest Michelin chefs—something very humbling to me. I will do my best to embody the passion of my mentors and pay forward the opportunities I received to enjoy good food, good wine, and French living with our guests.” 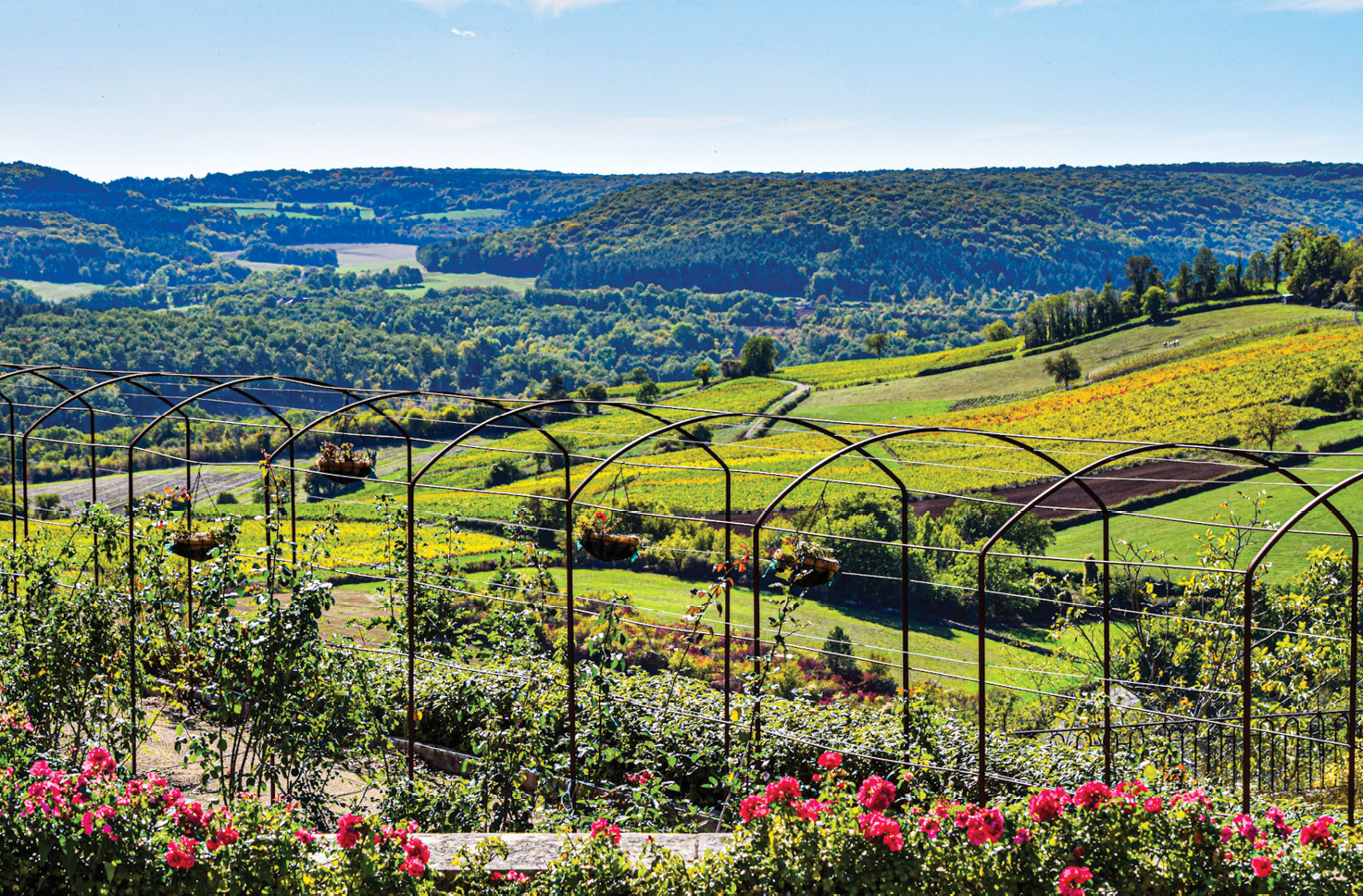 Views of the valleys below the hilltop village of Vézelay

Premier Tours & Travel invites you to learn more about its exclusive Fall for Burgundy with Chef Bob Waggoner tour.

12 nights from $5,870 based on double occupancy. This tour includes breakfast daily, 5 Lunches, 6 Chef’s Dinners, a Welcome Dinner, and a Michelin-star lunch or dinner.

Learn more about this exclusive tour by calling Premier Tours & Travel at 843.237.9903 or visit premiertravelsc.com. Space is limited.

Other culinary tours with Chef Bob Waggoner include: