Pecans
October 2014
WRITER:
Suzannah Smith Miles
Some say “pea-CAN” and others, “pea-KAHN.” No matter how you pronounce it, the sweet and buttery flavor of these nuts makes for tasty eating—either gobbled straight from the shell or incorporated into a dish, like the classic pecan pie. The native tree from which they hail, a species of hickory dubbed Carya illinoinensis, thrives in our subtropical climate and has been known to bear fruit even after 300 years of age, providing food for people and wildlife alike. Crack into a few more tasty tidbits about the pecan. 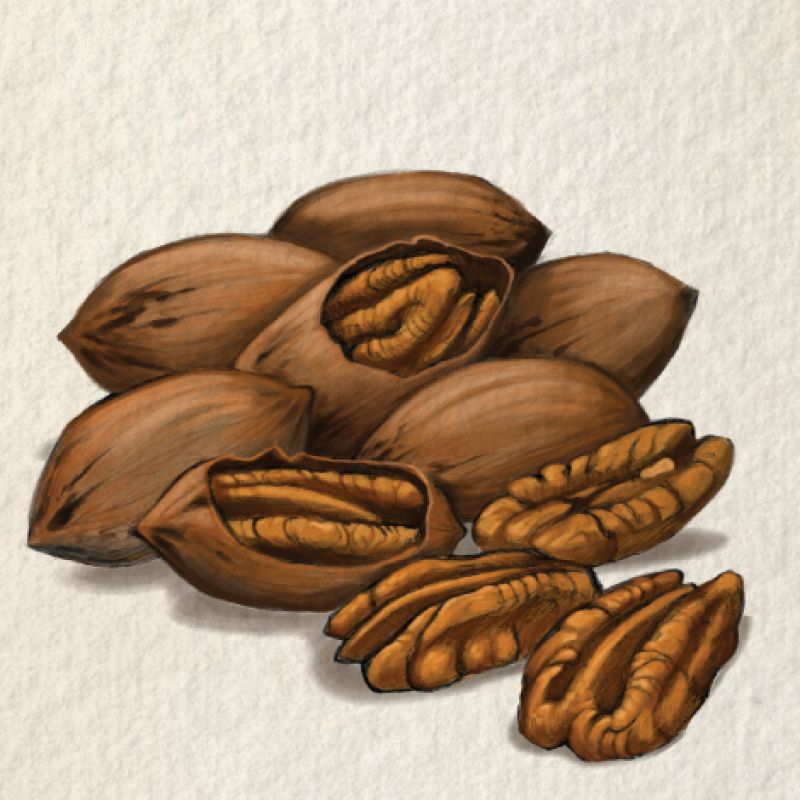 Sweet Release
The pecan is a drupe, a fruit with a single stone or pit (which we consider the ”nut”) surrounded by an outer husk. This husk forms in summer and first appears as a thick, green, leathery covering. In the fall, it hardens and turns brownish-black, eventually splitting apart to release a mature nut that falls to the ground between September and November.

Natural Resource
The wood from pecan trees­—which can grow to more than 150 feet tall—is often used in carpentry, and pecan oil is sought after for cosmetic purposes.

High Yield
Trees begin to produce fruit at age three. A healthy 10- to 12-year-old specimen can yield some 600 pounds of nuts per year.

Wild Roots
Wild pecans have been esteemed since colonial times, and homesteads and plantations had groves of the trees, but the nuts weren’t grown commercially until the late 1800s. In the early 20th century, Boone Hall Plantation had the largest pecan grove in the country. Today, pecans are a multimillion-dollar crop in South Carolina.

Easy Nuts to Crack
There are more than 500 varieties of pecans, including improved cultivars called “papershells” created for easier opening and commercial purposes.

Southern Staple
Pecans are used extensively in Lowcountry cooking, especially in desserts such as cobblers and pies and candies such as pralines and pecan brittle. They also grace the top of the sweet potato casserole traditionally served at Thanksgiving.

It’s a Trap
Nuts may be gathered using a pecan harvester, a simple tool consisting of a two- to three-foot-long stick with a metal device at the end that traps the bounty inside as it rolls along the ground.

Going Native
The name “pecan” comes from the Algonquian word, paccan, which roughly translates as “nut requiring a stone to crack.” Early Native Americans ate pecan nutmeats and also ground them into a sweet, creamy liquid called hickory milk, which they used to thicken broths and season hominy and other foods.

Health Nut
Pecan meat is an excellent source of vitamins, protein, and unsaturated fats. Recent clinical research has found that eating about a handful of them each day may help lower cholesterol levels and delay age-related muscle and nerve degeneration.