Move It!
October 2009
Here are a variety of places to hit the pavement or follow a trail 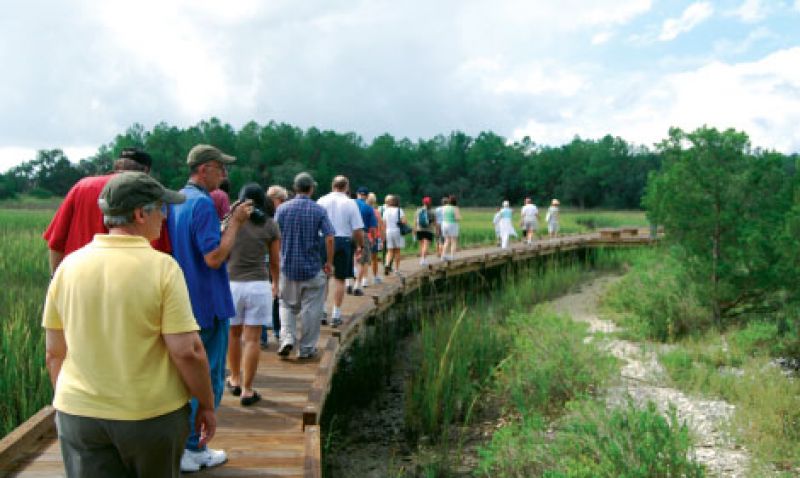 Arthur Ravenel Jr. Bridge
Since the day it opened in 2005, the 3.5-mile span over the Cooper River has become a mecca for runners and walkers. The harbor-facing pedestrian/bicycle lane is separated from car traffic and rises to 572 feet at its peak, making for the best hill training in the Lowcountry. Free

Dungannon Heritage Preserve
This five-mile network of trails off of Highway 162 near Hollywood offers a mix of hardwood and pine forests with cypress swamps along the way. It’s perfect for mountain biking and trekking with your dog. Free. www.sctrails.net

Hampton Park
On Saturday mornings, walkers and runners get free reign on the one-mile paved oval (once a horse track) at Hampton Park. Depending on the season, additional road closings are sometimes added to the schedule, which can be found on the City of Charleston website. Free. www.charlestoncity.info

Sewee Shell Mound Trail
This one-mile wooded trail loops to a massive mounded ring of oyster shells built by Sewee Indians some 4,000 years ago. Follow Highway 17 to Doar Road in Awendaw; take a right and go 2.5 miles to the dirt U.S. Forest Service Road 243 on the right. A small parking lot is about half a mile ahead. Free. www.sctrails.net

Sullivan’s Island
Connected to Mount Pleasant by a path-lined causeway, four-mile-long Sullivan’s Island is a favorite for runners, with its grid of mostly low-traffic streets and wide beachfront. Island scenery includes ocean and harbor views, historic sites at Fort Moultrie, and the century-old Officers’ Row on I’On Avenue. Free

ON TRACK: Having trouble keeping pace with the 100-plus races taking place here annually? Sprint over to www.runningintheusa.com or www.active.com for a directory of events by state and zip code. 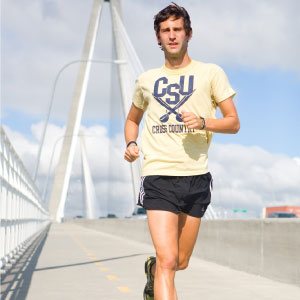 Who: Ryan Thompson, age 28, is the Cross Country and Distance Coach for Charleston Southern University. The downtown denizen also works part-time at On the Run.

Street Cred: Ryan was the second local finisher in the 2009 Bridge Run, earned the runner-up spot in the 2007 and 2008 Kiawah Island Marathon, and finished—you guessed it—second overall in a marathon on Sauvie Island, Oregon, in July. But this summer, he had a first: Ryan coordinated the inaugural Charleston Southern All-Comers Track Meet series, where anyone could compete in timed track events for just $5.

Best Run: Ryan and his wife, Anna, participate in the annual Turkey Day Run through downtown Charleston every Thanksgiving.

On Time: He never heads out for a run without his Timex Ironman watch—it’s basic, sans glitz, glamour, or GPS capabilities, but he feels naked without it. “I try each summer to best my watch tan line from the previous year!”

MOUNTAIN TO SEA: Currently comprising almost 290 miles of passages, the Palmetto Trail will eventually include more than 425 miles of hiking and biking paths from Oconee State Park to Awendaw.

Sierra Club, Lunz Group
With a mission to “explore, enjoy, and protect the wild places of the Earth,” Charleston-area members lead hikes, cycling trips, and kayak/canoe excursions, including an upcoming day hike/paddle on North Williman Island in the Ace Basin. The suggested donation for outings is $5 per person. www.southcarolina.sierraclub.org/lunz

Team in Training—Charleston
This healthy and philanthropic group offers training (and purple T-shirts) to people who take on, often for the first time, endurance sports such as half-marathons, marathons, triathlons, and long-distance cycling. In return, athletes generate donations for the Leukemia & Lymphoma Society. www.teamintraining.org/sc 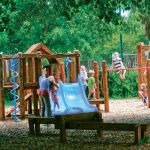 Climb, crawl, slide, scurry, and scoot your way across the area’s numerous parks and playgrounds 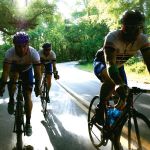 Find adventure both on- and off-road 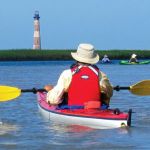 With water weaving its way throughout our landscape, the possibilities for exploration are endless 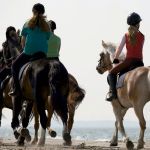