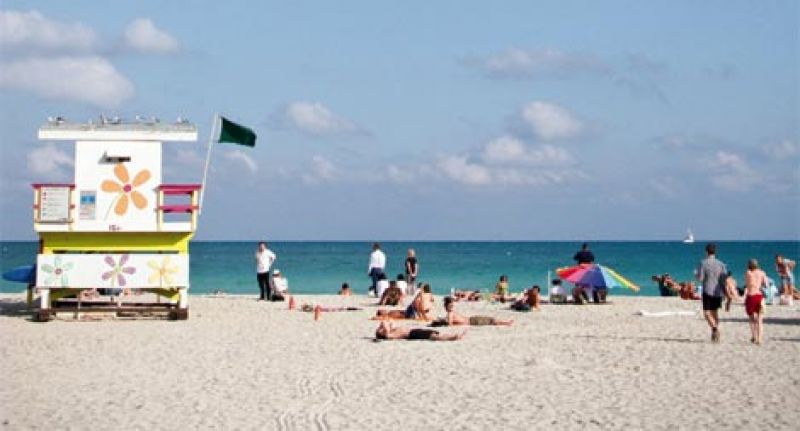 When a Lamborghini zips by, you feel it. There’s a low rumble reverberating through the pavement. With the Porsche Box­ster cruising along three cars back, not so much. There’s still a remarkable purr, but it’s slightly less impressive, it’s felt less in your gut.

At least that’s the way it was on a recent Saturday night in car-loving Miami Beach—Ocean Drive in South Beach to be exact—where the sun was setting in a pinky-blue just over the dunes and the streets were hive-full with people walking and lines of cars creeping. The parades were starting—not official events, but the daily fare of pomp along Miami's famed beach strip when the sun goes down and the neon signs brighten.

Recession? What recession? That’s what I’m thinking when another Paris Hilton-thin woman walks by managing armfuls of boutique shopping bags. These are the streets where impressions matter. Conspicuous consumption is front and center, and beautiful people are everywhere in their in-fashion, immodest clothes. (Winter’s high season for tourism is also prime time for models to gather in Miami and for fashion catalogs to be photographed on warm beaches and in always-green gardens.) However, humility is nowhere to be seen in South Beach. The shoe is important—as are the hair, the dress, the dog. Earlier, a few blocks over on Washington Avenue, a young woman in high-heeled slingbacks leaned heavily on her boyfriend, holding his arm as she toddled painfully into a shoe store. Once inside, she immediately plunked down on a bench and pointed to the display of flat sandals.

These kinds of people-watching scenes and snapshots played out over and over again during a three-night Miami getaway this winter. The buildings were the backdrop for the show—the Art Deco District in South Beach is known to be the largest representation of 1920s and ’30s resort architecture in the world. Newer buildings, skyscrapers, theaters, and hotels often borrow from the Art Deco lines and curves or feature all-white Modernist designs in smooth stucco. More than 800 buildings are part of the historic district, where façades and embellishments are the colors of tropical flowers and give tribute to symbols of grand leisure and early 20th-century technology—the ocean liner, radio, and airplane. Pick up a brochure or stop by the Art Deco Welcome Center and you’ll quickly learn to keep an eye out for decorative portholes, glass blocks, ship railing-type features, and other Deco touches.

Because the street scene is so visually intense, finding hideaways and calmer spots the following day became our mission. In the noontime shade of twisting sea grape trees near the pool at The Raleigh, we sipped Bloody Marys and shared a generous slice of quiche lorraine, all while sinking back into wooden chairs made plush with plump pillows. The scarab-shaped pool is where Esther Williams performed swim scenes in 1940s and ’50s films, and where celebs from James Dean to Christopher Walken have been photographed lounging about. We saw a man in swim trunks who I’m 90 percent sure is a moderately famous news anchor. And since we’re talking people watching, we’d earlier come upon two photographers with huge, long-range camera lenses aiming toward the ocean while trying to hide behind a beach cabana. The leering pair of paparazzi then suddenly ran down toward the water like lions after prey. We couldn’t see their target and joked that maybe it was one of the presidential candidates. In any case, the whole situation didn’t seem to faze the beach-goers very much.

It’s worth noting that there is substance to the Miami glitz, in places. In December, Miami hosted Art Basel Miami Beach for the seventh year—the American companion to the 39-year-old Art Basel show in Europe—and the four-day annual event is credited with infusing Miami with an international art scene year-round, particularly in the months just before and after the festival. (The fanfare and effect felt like Spoleto.)

In a contrary move to Miami’s car culture, we rented beach cruisers each day and took cabs at night. Besides being a handy way to get around quickly, pedaling all day gave us great justification to stop for batidos de plantano (banana milkshakes) at Cuban cafés, and bread sopped in olive oil and chunks of fresh garlic and pepper at their Italian counterparts. We also went on a tranquil mid-day ride on the Venetian Causeway, a man-made structure across Biscayne Bay that’s linked by a series of gently arching bridges and oval-shaped residential islands. Terrific views of the downtown Miami skyline and of South Beach can be had all along the way. And car traffic was minimal, diverted by the slow speed limits and the tollbooth on the Miami side.
It was from our bikes that we sought out the many memorable South Beach spots and scenes, among them Española Way. With lightbulbs strung between buildings and street vendors selling hand-sewn dresses and craft jewelry, there was a bohemian, old-world feel to the narrow streetscape. The pedestrian-only block is between Washington and Pennsylvania avenues, just north of 14th Street. There, Miami’s cosmopolitan nature shines, with the trés French À La Folie situated near a booth of embroidered Mexican linens; Sobe Unique, a shop of handmade and embellished espadrilles; and Hosteria Romana, an Italian restaurant that serves a “peasant pasta” of wide housemade linguini with ground sausage and grated cheese.

Later, we had a relaxing dinner in the well-established tropical garden dining room of Creek 28, the restaurant at the Indian Creek Hotel. The curry red lentils with coconut was delicious, as were the grilled scallops with tomatoes and chorizo. The 1936 Art Deco hotel was our lodging for the trip, where we had a sunny yellow room with a vintage ceramic-tiled bathroom. Located on the northern end of South Beach, Indian Creek is in a quieter area with a neighborhood Cuban café, Tropical Beach, just down the block.

Back on Ocean Drive the next day, we came upon a huge gathering of dachshund owners with their petite, low-slung dogs. Hundreds of people walked with their pets, many of which sported tiny sweaters or jeweled collars. We struck up a conversation with one woman in a triangle bikini top and yoga pants who introduced us to her fawn-colored, eight-pound dog, Red. Before long, a man with a female dachshund in his arms walked up. He wanted to introduce his dog, Havana, to Red and wondered if Red’s owner might even be interested in breeding the two. “I would, actually,” she said with a proud smile. And, within seconds, the woman and man had each pulled out their cells to exchange numbers.

Havana’s owner said he’d call Red’s owner soon, maybe early in the week. “Great,” she smiled. And then we all said our farewells and walked off separately, each of us winding again through the Miami crowds while the bright sun beamed, and the sports cars rumbled by.