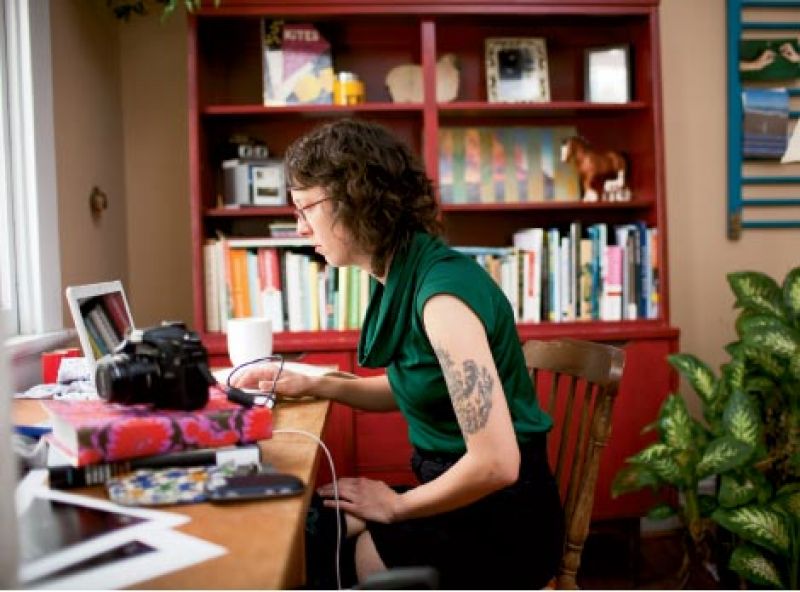 Melinda Mead describes her photographs as “an archive of the in-between.” Documentary in style, they are voyeuristic, offering glimpses of intimate, ordinary moments. In untitled [pier louise], a woman stands in her kitchen eating a slice of apple. It’s a quiet domestic haven: dishes dry in a countertop rack in the foreground and The Joy of Cooking stands next to the Encyclopedia of Natural Medicine. And as we onlookers peer into the layered scene, through an interior window that opens onto the kitchen, past the slim subject, and out a set of exterior windows, there’s a feeling that this woman might just stand there forever.


“This project was a labor of love,” says Mead, a Summerville native who works as an accounts and materials manager at the College of Charleston Library. For the series, which started as a class project at the college last fall, she took multiple shots of 15 to 20 artists, musicians, and other creative types—“people,” Mead says, “who were living and/or working in environments that excited me.”


The resulting portraits allow the viewer backstage in these people’s lives, into what Mead refers to as “overripe environments chock full of flotsam and jetsam,” revealing even more about the subjects than their own visages do. In seeking to create authentic narratives, the already soft-spoken Mead says she was often silent while taking the photos, thus allowing the tension between a personal but captured moment.


Mead began taking photographs more seriously after she returned home to the Lowcountry to help care for her cancer-stricken mother. She describes her mom as a “staunchly independent woman” with a supportive network of family and friends. As a former English major, she had little training in photography but reveled in the creative outlet and began to re-familiarize herself with the Lowcountry through the lens of an old Canon FTb.


“Over time, I became more involved with the camera and got involved with the local art scene,” says Mead. “Using a manual camera gave me the opportunity to learn about the way the light works.” When her mother eventually died, Mead took a class at the Center for Photography. It got her out of the house, which, she admits, was critical at the time and sparked a major turning point in her life.


For this body of work, Mead shot color film on her digital 40D camera, explaining that she’s “a little spoiled by the level of control” it offers. “I hope that these images cultivate a spectrum of questions about privacy, personal spaces, and the role of the photographer in the construction of a visual reality,” she says.