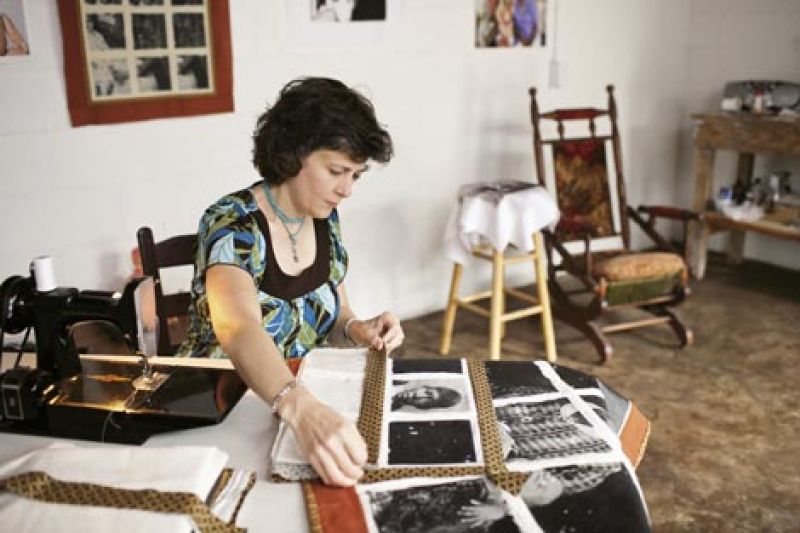 Artist DH Cooper sees herself as an archivist. Sifting through discarded photographs taken in the 1800s to the present of African-American nannies and the white children they helped raise, she examines the subjects, evaluates their social hierarchies, and then re-imagines the compositions, transferring the images to cloth, which she then embroiders and quilts. “By combining traditional crafts and manipulated photographs, DH Cooper questions tradition and heightens the viewer’s awareness of contradictions that are still relevant today,” says co-curator Erin Glaze.


Cooper first visited Charleston in 2005 as a grad student at The School of the Art Institute in Chicago and returned a year later as coordinator for the Spoleto project “Evoking History: Places with a Future.” For this, the artist worked within Mount Pleasant’s rural African-American Phillips community, exploring issues surrounding coastal development and threats to land and people. “I was aware of my role as an outsider, but always strove to see things from the community members’ viewpoint,” she explains. “The project was more than art to me; it was about the relationships I built with the members of Phillips.” Those relationships and “examining the connections or disconnections between groups” led Cooper to the “Nanny Project.” Five years later, and Cooper says she’s just scraping the surface: “Any nanny and the family she works for is a complicated relationship,” she explains. “These women have helped raise generations of white people and are often deeply loved by these children, yet we still have many divisions between the races.”


In Quilt Fragment #3, Cooper features a portrait of a nanny and baby divided into nine squares of fabric. The nanny’s face figures prominently in an upper square, while the baby—bisected by a line across its body—becomes secondary, and the paradigm is reversed. “When the nanny is the woman who meets the child’s emotional and/or physical needs, then on some level she becomes the matriarch of that household, whether she’s recognized for it or not,” Cooper explains. “By fragmenting and then reconfiguring the original image through piece quilting and/or embroidery, I disrupt the original hierarchy and reframe the importance of the nanny’s position.”


Cooper says she is not diminishing any love between the nanny and children but is posing questions: “What are the family dynamics, and where does the nanny fit in? Were these old photographs taken to show an affectionate relationship between the nannies and their charges or were they more about showing off one’s status?”


Digging through pieces of our past, Cooper takes viewers out of their comfort zone and offers up a new way of seeing. “Historical and contemporary relationships in the domestic arena have remained complex and deserve deeper exploration,” she says. “My hope is that this project creates a dialogue around the various domestic relationships that shape us all.”