In Living Color
May 2014
WRITER:
Carlye Dougherty
PHOTOGRAPHER:
Julia Lynn
The renovation of her 1960s tri-level leads artist Sally Bennett, and her family, down a new path 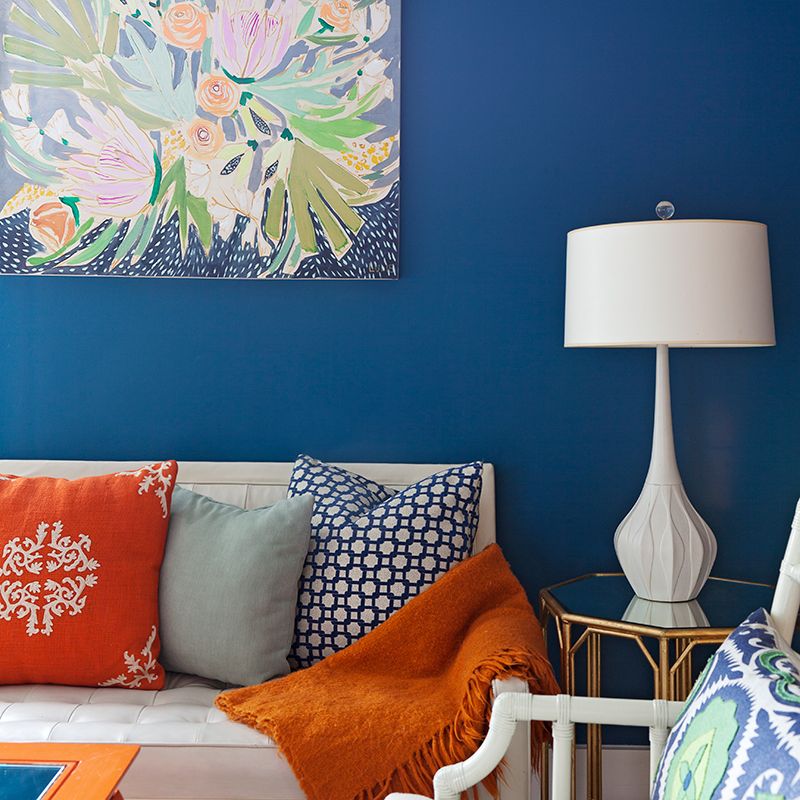 Entering the foyer of Sally Bennett’s Riverland Terrace home is like stepping into a kaleidoscope. For a whirling instant, the exotic patterns of warm reds and oranges hugged together by minty greens are so dazzling that it takes a moment to look up and meet her greeting. But Sally—the resident artist, wife, and mother of three—is unphased by any delayed response. In fact, as the creator of the captivating flooring, she’s complimented by it. “When we bought this house, I knew I wanted a foyer that would set the stage for the rest of the home. One that would make a statement,” she says.

And boy did it; the first steps of her home renovation and the conception of her new business, Mirth Studio, began in this kaleidoscopic space.

Sally and her husband, David Baxley, first made their way to Charleston in 2009 with daughters Ella (then 10) and Ruby (eight) in tow, fleeing cold winters and four-hour daily commutes from Connecticut to New York, where the couple designed and owned popular nightclubs, such as Centro-Fly and Drinkland. “We researched Southern cities for two years and decided on Charleston because it fit our criteria—a college town where we could open a bar, I could practice my trade as an artist amongst other artists, and we could have a great family life,” explains Sally.

The plan to open a bar was filed away when David got a dream job offer to manage entertainment for a major casino in Macau. And so the family embarked on an adventure to China. There, Sally set up a studio in their living room and focused on fine art, sending her paintings to a gallery in the U.S. and even securing licensing agreements with Target for a few of them. Then came baby Harry, her “little souvenir from China,” who inspired their return to the Holy City.

“It was an unbelievable year,” admits Sally. “The plan was for me to get the kids in school and look for a house and for David to come right behind us.” But finding a home in their price range with the necessary space for her family of five wasn’t as easy as she hoped. After months of searching downtown, she crossed a couple of bridges and fell in love with an oak-lined street in Riverland Terrace.

The house that brought her to the James Island neighborhood—a four-bedroom, 1960s tri-level—was the opposite of the open, bright mid-century homes she was accustomed to. The kitchen was small, dark, and closed off from the rest of the house, which was about 300 square feet smaller than what they needed. “When I first looked inside, I thought, ‘No way,’ but when I went to bed that night, I couldn’t stop thinking about the possibilities,” says Sally. “I became obsessed with the house.”

And this interiors pro, whose New York design firm specialized in decorative painting for all sorts of residential and commercial clients, including Coach, Tory Burch, and Ralph Lauren, was up for the challenge. Her first goal: “Bust up the ceiling and raise it,” she says. “It’s not what a house looks like, but how it makes you feel, and a white floor with high ceilings and lots of light makes you feel like you’re walking on a cloud.”

Sally designed and supervised the renovation, opening up and combining the existing first-floor kitchen and living area. Then she added the needed 300 square feet to the living room along with a powder room. “I knew my family would be doing most of our living on the main level,” she explains.

With the majority of the structural changes complete, Sally hit the floors. “I’ve always loved the drama and pattern of Moroccan tile,” she says. “It’s the first thing that came to mind when we began renovating.” Sourcing this dream tile was easy, but figuring out how to ship tons of it to the U.S. in a cost-effective manner was another story. So the take-charge gal decided to make them herself, heading to her studio at Redux Contemporary Art Center to paint and silk-screen exactly the kind of statement tiles she had in mind. She created the foyer pattern first, and those for the media room and living room soon followed.

With practicality in mind, she decided wood tiles were much more “mommy friendly” than the ceramic versions which had inspired her. “Little heads get a much softer bump from wood than they do from tile,” she says. The tongue-and-groove design also made the installation a breeze. It didn’t take long for Sally to realize she was sitting on something much bigger than her foyer floor. With a portfolio of patterns in hand and a manufacturer solidified, Mirth Studio emerged right alongside her new home. “Nearly every floor in the house is a prototype,” she says.

With one more project on the horizon, the renovation is nearly complete. (“I just haven’t had it in me to rip these stairs apart just yet,” Sally says, envisioning a new line of treads and risers down to the den.) The kitchen, dining area, and living room all flow together, her vibrant mix of color and pattern complementing the tone set by the foyer. Chinoiserie style elements, art by Sally and her friends, and other prized pieces picked up along the family’s adventures brighten the home throughout.

She points to the mid-century chandelier, its many globes shining brightly before floor-to-ceiling windows looking out into old-growth oaks. “That chandelier was in our house in Weston, Connecticut. We’ve carried it with us to all these places,” she muses.

In the family’s new home, the trappings of their adventuresome life fit together like the patterns of Sally’s tiles. And perhaps the best is yet to come. “I really do need to throw a housewarming party,” she remarks. “Can’t you just see a tile dance floor under those oak trees?”