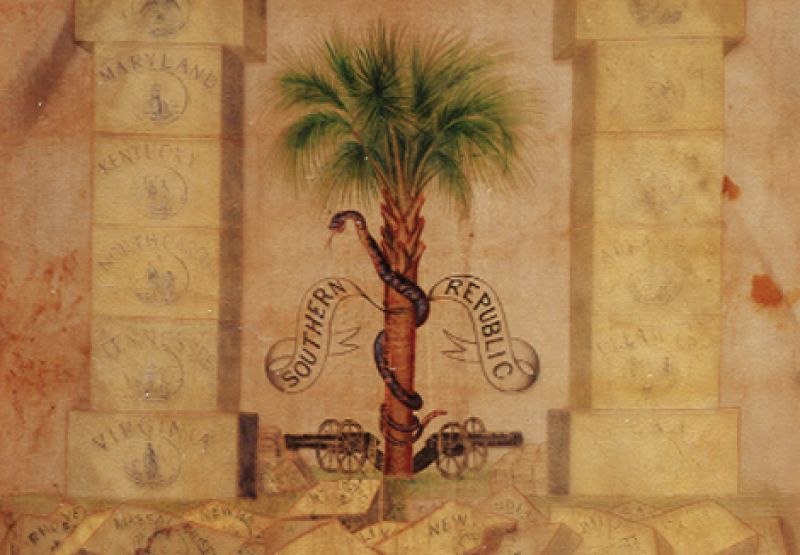 What survives from the past and what does not can elude logic, with fragile items sometimes inexplicably outlasting the more sturdy. Consider what happened to Charleston and the South in December of 1860.

Multitudes met in St. Andrews Hall to pen an ordinance enabling South Carolina to become an independent country. The draft was then carried to Institute Hall next to the soaring spire of Circular Church on Meeting Street, where artists recorded the pivotal moment—men marching to a table to sign a document fated to change American history. Behind the signers floated a banner boasting a central, statuesque palmetto tree and an arch of 15 blocks, symbolizing those Southern states expected to secede. South Carolina acted as the vital keystone. Using fragile egg tempera on a white cloth, the painter, Isaac Brownfield Alexander, had included Kentucky, Maryland, Delaware, and Missouri, although they never joined the Confederacy. At the top of the arch, he painted John C. Calhoun wrapped in a toga with the Constitution in hand—just as the sculptor Hiram Powers had depicted the man whose political theory had been leading up to this occasion for years. At the bottom lay fallen stones representing those states apart from Dixie. “Built from the ruins” read the legend. At the top, stars rose in the heavens.

Then, in April 1861, the heavens streaked not with stars but gunfire as Fort Sumter was fired on and the city saw the beginning of the Civil War. By December, flames had destroyed many of the sites associated with the Confederacy’s founding. Institute Hall was reduced to ashes, as was St. Andrews Hall, next to the Catholic Cathedral of St. John and St. Finbar on Broad Street. In less than four years, the Confederacy fell. Tens of thousands lay dead. Even Hiram Powers’ statue of Calhoun was destroyed.

Against all odds, though, the fragile secession banner survived. Returned to the artist, it made its way to the New England Historical and Genealogical Society as the South was rebuilt from ruins. Then in 1963, during the commemoration of the Centennial of the Civil War, its caretaker gifted the banner to the South Carolina Historical Society. There it lay for decades, until the discarded canvas was found tied up, still in its 1963 wrappings, in the bottom drawer of a secretary. Imagine the society’s shock when staff members unfurled the banner on Meeting Street and discovered the sole surviving “witness” to the birth of the lost cause.  Now, this almost forgotten bit of history is once again on display as the city recognizes an historic occasion—the 150-year anniversary of the signing of the Ordinance of Secession.

View the secession banner at South Carolina Historical Society on Sunday, December 19 from 1 to 3 p.m. and Monday, December 20 from 10 a.m. to 3 p.m. www.southcarolinahistoricalsociety.org