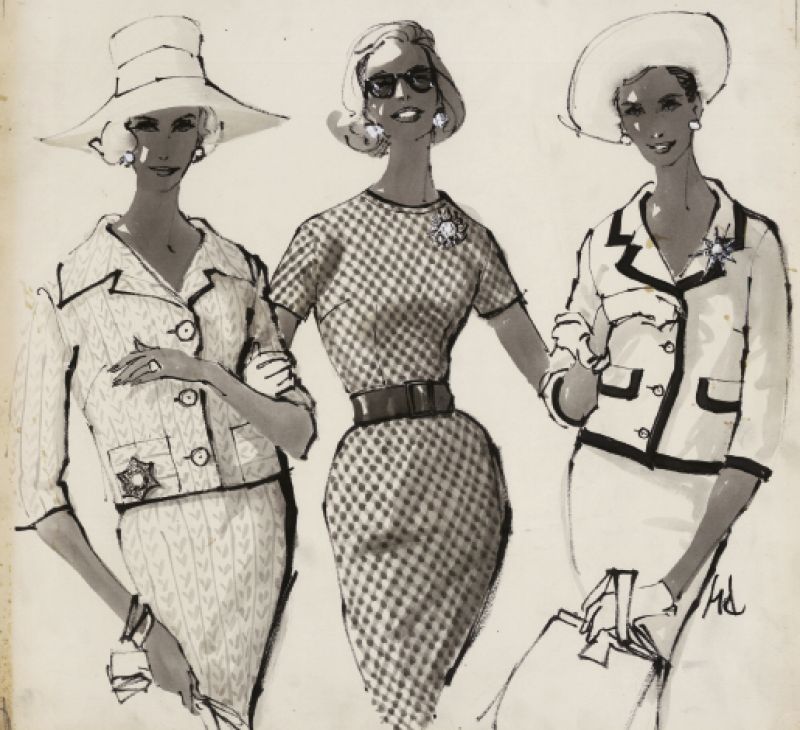 It was the era of Grace Kelly and Elizabeth Taylor. Pearls, hats, skirts, and heels dominated fashion, and “you didn’t think of going out without your white gloves,” remembers Patricia “Pat” McCullough Stevenson, who worked as a fashion illustrator for B. Altman from 1954 to 1961.

The upscale department store, one of the first of its kind in the country, took up an entire square block of Manhattan’s Fifth Avenue. “I remember hearing tales of horse-drawn carriages and fashionable ladies being escorted to the store by liveried doorman,” she says. “It was very elegant. You went there to buy something special.” Pat is no nonsense when describing her years in the fashion capital, and it’s easy to imagine this “tell it like it is” woman holding her own in those days of the male-dominated advertising world. “I wasn’t glamorous myself, but I loved the glamour of others,” she says.

Pat grew up an only child on a less-than-fashionable side of Manhattan, and her parents divorced when she was young. But creativity kept her company, and she “never had a bored moment—I was always drawing.” Following high school, the burgeoning artist received several scholarships to The School of Visual Arts, where she studied cartooning. And when the art director of B. Altman visited the school and saw one of her pieces on the wall, he immediately offered the 18-year-old a job.

Pat’s career blossomed during the heyday of big-city newspapers such as the Herald-Tribune, the New York World-Telegram & Sun, and The New York Times. As the sole in-house illustrator for the company, the young woman worked under strict deadlines to create “double-truck ads” (two-page drawings) of beautiful ladies wearing the latest fashions.

The illustrator’s natural talent flourished in the competitive environment at B. Altman. She remembers when her boss, Lou Ritter, refused to give Andy Warhol a job, declaring, “What is this?” as he threw the artist’s résumé in the trash. Pat retrieved the drawing of a woman with advertisements covering her arms and legs like tattoos. “Ritter said Warhol would never make it at Altman,” she laughs, noting that she still has that rescued picture.

Over the years, a mastery of technique and simplicity of style defined Pat’s sketches. She understood the way a woman stood and walked and could capture the tilt of a lady’s head in such a way that whatever she drew created a demand. “I had to be careful about what I put into my pieces,” she explains, recalling the time she included a baby chick wearing a flowered hat in an ad and women rushed to B. Altman wanting to know where they could purchase one.

Her pen and pencil drawings on tissue paper are crisp and elegant. In some, the faint lines of ad space measurements and notes in the margins can be made out. With downcast eyes or a hand placed on an outward jutting hip, the subjects pose as they sip tea, lounge on the beach, or clutch flowers. On the front lines of fashion during one of the most glamorous decades in our country’s history, Pat’s illustrations speak volumes about American women of the ’50s.

Those original sketches are now available at Eye Level Art, taking audiences “back 60 years to a busy New York atmosphere,” says director Mike Elder. Jennifer McGrath, a former New York runway model and Charleston artist, has been collecting Pat’s work for years. “Her fashion illustrations portray classically styled, sophisticated women and transport you to a time when a lady always dressed like one,” she says. “They are truly timeless treasures.”

After almost a decade in the fashion industry, Pat left her position at B. Altman in 1961, opting for the less glamorous (but for her, more important) job of staying at home with her four children. She continued drawing for pleasure, but with her husband frequently traveling for work, she had limited free time. The couple eventually retired to Mount Pleasant, where they are now surrounded by children and grandchildren. A bad fall two years ago has restricted her to a wheelchair, but she still has the use of her hands. And as part of her therapy, Pat has started to draw again. After all these years, creativity remains her constant companion.