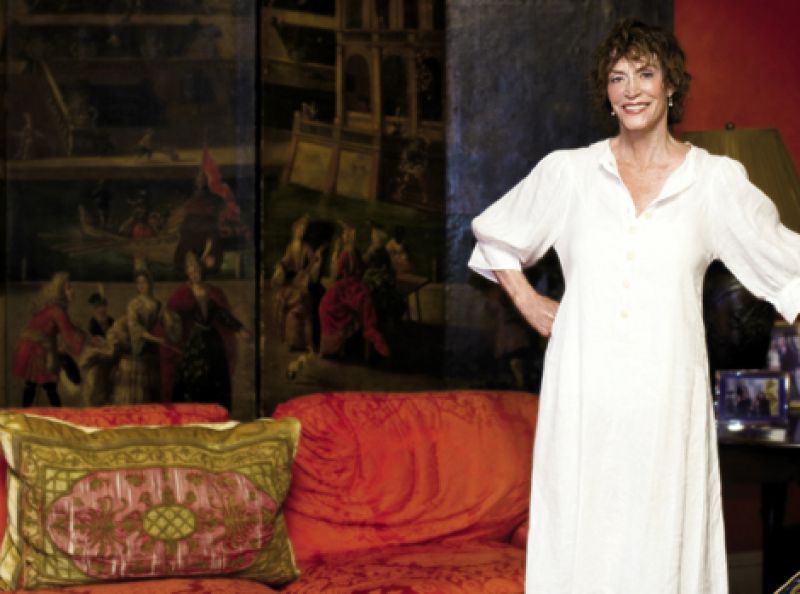 Power. It’s an onomatopoeia, alluring in both sound and meaning—an intoxicating, strong word, with that punchy, hard consonant up front then trailing off to a breathy ending. Power: occasionally promising, often menacing. A flirty, dangerous word, and an even more elusive and tricky concept, especially when you wield it, or think you do. So confesses Charlotte Beers, a woman whose CV is so full of CEO and chairman titles that it almost gets redundant. A woman who looks you directly in the eye and can talk about power with authority, and about authority with power, but would rather talk about another word altogether: authenticity.

“Power comes from within,” Beers says not two minutes into our interview. Forget the small talk—she dives in, yes, with authority, yet also with a casual, disarming warmth, her Southern (via Texas) pedigree obviously finding its comfort zone in the sunny den of her East Bay townhouse.

“The world I grew up in, the world of ‘Big Business,’ tends to say power resides in fancy titles and private airplanes, but I’ve learned that the power that stays with you and is satisfying comes from hard introspection. Figuring this out is what provoked me to write this book,” she says, referencing I’d Rather Be in Charge (Vanguard Press, 2012). The book’s much-heralded release has given Beers two new job titles: author and teacher (although the Baylor College math major and physics minor did have early stints teaching junior high math and junior college algebra). And it’s given her a platform to distill lessons learned from her ground-breaking advertising career into a road map of wisdom for (mostly) women slogging up corporate ladders, encountering glass ceilings, and high-heeling it through business minefields.

Charlotte Beers has been in charge all right, as a quick tour of her professional pinnacles makes clear. She began as a researcher and then product manager for the Uncle Ben’s brand at Mars, Inc., and after she fully cooked that rice, Beers joined J. Walter Thompson, where she became the first woman promoted to senior vice president in 109 years of company history. Next move was to become CEO of Tatham-Laird & Kudner, a much smaller but beleaguered ad agency where she tripled company earnings in as many years, and from there she was named chairman/CEO of Ogilvy & Mather Worldwide, and then chairman at J. Walter Thompson. When General Colin Powell asked her to put her communications mastery to work for Uncle Sam, Beers served 22 intense, grueling months as Under Secretary of State during the tense Afghanistan War, post 9/11 years. “Charlotte Beers at Ogilvy” is the subject of a long-standing Harvard Business School case study on leadership, and she has been a cover girl several times over, gracing the front of both Fortune and BusinessWeek. Her many awards and accolades include being inducted into the Advertising Hall of Fame in 2009. All of which she is both fiercely proud—especially if it inspires and encourages other women—and quick to brush aside. “If you live long enough, someone will commend your career,” she deadpans.

“I had the fantastic good luck to fall into the work that I was meant to do and had an affinity for. I was a natural in the advertising business,” says Beers, who calls a spade a spade and credits her success in advertising to her insatiable curiosity and fervor for the products she represented. Case in point—her now legendary Sears Craftsman presentation, a quintessential, unabashed Beers impromptu showdown: the lone woman in a room of stiff male suits, she takes the reversible double-insulated variable speed corded drill, disassembles it, then reassembles it—all while delivering the campaign pitch and never missing a beat.

“I loved that drill, still do,” she adds. “I’ve loved every one of my products.” Being passionate is the secret to being persuasive, according to Beers. “If you care ruthlessly and have a degree of knowledge, a degree of resolve, and an ability to articulate it well, and if people can tell that this comes from your core self, it’s unstoppable. You seize the minds and energy of others when it’s clear that you have your own skin in the game,” Beers says. “I don’t sit on the sideline, I jump in.”

And now in her “retirement,” Beers is still unstoppable, jumping head and heart first into her life in Charleston with husband William Beadleston—a retired international fine art dealer turned painter—and into her new calling as teacher, speaker, and mentor to professional women in the Lowcountry and around the world. Beers is that double-insulated, variable-speed drill, a versatile and dynamic power tool, and she applies her laser sharp, high-speed curiosity and intellect to dissecting her life and career, just as she took apart that drill, examining all the small bits and pieces—both her moments of fearless brilliance and moments of despair and self-doubt—to understand how it all fits together, to explore what has functioned well and what could be improved.

“There’s no substitute for keeping your own scorecard, for not letting yourself be defined by others’ perceptions of you,” says Beers, though she notes eventually it can be helpful to understand others’ perceptions, so you can match that against your own assessment, then shed what isn’t helpful, amend what can be improved, and magnify your strengths.

This “brutal self-inventory” provides the fodder for I’d Rather Be in Charge, a book that is more master class than memoir and the groundwork for “The X Factor” seminars that Beers leads for high-level executive women at WPP—the world’s largest marketing company with more than 140,000 employees worldwide and the holding company for Ogilvy & Mather, JWT, and other marketing powerhouses. “You have to test the parameters of who you are,” she advises. “You need to know your potential for elusive things like resilience and fierce resolve.” Beers talks revealingly about “hitting a wall” in her professional life when she became CEO at Tatham. “I had to come to grips with how limited resume skills are. I once believed they were the sum total of me.”

Beers’ charisma and power stems equally from a hard-won self-confidence and a willingness to be vulnerable and “surprisingly transparent for the benefit of others,” a combo that makes her a mesmerizing teacher, says her X Factor colleague Trish Shortell, vice president for Talent Management and Strategy at WPP. “Charlotte’s name is synonymous with breaking the glass ceiling. She’s been globally recognized as a trail-blazing CEO, and now she looks around and says, ‘Where are they, where are the women execs, the women CEOs?’ It’s heart-wrenching for her to see them not there,” Shortell observes. “So, instead of retiring and putting her feet up, she’s looking to the women in the leadership queue and saying, ‘I’m going to help you. I want you to know what I had to learn the hard way, that it isn’t about the men, it’s about you.’”

Beers doesn’t shy away from addressing the proverbial and provocative challenges related to work/life balance that continue to plague women (witness the recent heated discussions surrounding an Atlantic Monthly article by Anne-Marie Slaughter). In her mind, the division is clear: “You are not the person at work that you are at home,” she affirms, which is to say that women in leadership will be called on to exercise different traits than the more nurturing qualities of loyalty and friendship that may take precedence at home and in personal life. But home is no less important to Beers, especially given her growing infatuation with “home” being Charleston, where she and Bill moved in 2003.

“Billy and I were surprised by joy to find Charleston,” Beers says, recalling how they stopped here on their boat and were smitten by the city’s charming scale, its beaches and waterways, and its plethora of churches (“they make me feel we’re all working on it,” she says). She and Bill, a sailor and boating enthusiast, enjoy going to the beach and spending time in heady conversation with friends. Exploring Charleston’s creeks and waterways by kayak is on Beers’ to-do list, which she’ll fit in somewhere between reading voraciously, traveling to give speeches, and leading X Factor classes.

“Charleston is a fantastic town for women,” says Beers, whose grown daughter, Lisa, lives in Texas. “The women here are sophisticated, seductive, and persuasive, which is my standard. They seem to hold powerful secrets; they spice things up and are considered by their men to be forces to reckon with.” Which, of course, she knows a thing or two about.