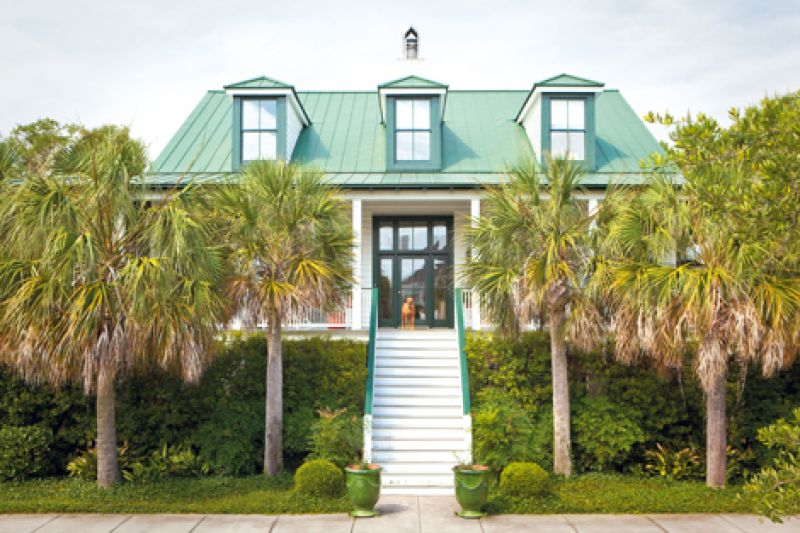 Talk to people around the Lowcountry and you find boomerang types all over the place—folks who got a taste of the Holy City at an earlier point in life, left for whatever reason, simply couldn’t get it out of their blood, and eventually moved back.

French-born Nicolas Prouvost is one such soul, his first encounter with the area happening as a kid when his parents moved to downtown Charleston for a few years. “I got a paper route, rode my bike everywhere, and even had a boat,” he says. “Imagine that, 12 years old with a boat! I had to come back.” As Nicolas relays this, he’s sitting on a bleached-out dock that skims the Seabrook marsh while his Swedish-born wife, Maria, and their sons, Lucas and Emile (ages six and five, respectively), play on the floating dock below. It’s low tide, and the boys are giggling as they slather their feet with pluff mud. Maria’s got an eye on Lulu, the family’s slight, 10-month-old Chihuahua-Yorkie mix, who is trudging through the mud, the sucking sounds of her little steps mingling with the popping of the oysters.

Emile fiddles with tiny crabs that move away from him in waves, and Lucas talks about the key to catching fish. “You’ve got to be real quiet,” he explains, “and don’t let your shadow touch them because it’ll scare them.” Fishing, he says, along with the water, the mud, the boat, and the nearby Botany Island beaches are what he and his little brother adore most about where they live. It seems there’s another generation of Lowcountry lovers in the making here. And that’s just what Nicolas and Maria wanted.

As the group wanders back up the dock toward their house, the couple explains how they came into such a lifestyle. Although Nicolas’ parents relocated the family back overseas when he was still young, he continued visiting through the years, kept up with his childhood friends here, and eventually bought a slice of Seabrook in the late 1990s. “It was initially an investment property,” Maria explains. “But then he built a vacation home here instead.” Working with architect Jim Thomas, Nicolas (who at the time lived in Paris) wanted an atypical Seabrook residence. “I wanted it to look like an old-school beach house.”

“A pre-World War II beach house on Sullivan’s Island became our point of departure,” says Jim, describing a “timeless island house” with a raised four-square plan and a veranda wrapped almost all the way around. “The connection between the interior and the elements outside (by way of the porches) forms the essential relationship between man and nature and sets up a lifestyle that allows a family to truly experience island living,” he says. “In its clarity, its freshness, and its simplicity, our variation on an old prototype is both more traditional and more modern than the conventional Seabrook Island house.”

Other “wants” for Nicolas? A pared-down, “primitive” camp vibe as far as finishes were concerned, and a place where kids and dogs and grown-ups could run around barefoot with no thought toward messing up the floors. With those criteria in mind, a two-story, 3,500-square-foot home—a relatively modest size by Seabrook standards—sprang up with four bedrooms and a layout that’s centered around a great big great room. Expansive windows stretch along all sides and give a fantastic safari feeling to the inside. “Often, porches and verandas make the interior of a house seem dark,” says Jim. “But we employed tall windows—almost 10 feet high—that extend down to the floor to bring in more light and breeze. And we made a clerestory over the living room with another group of windows above in the gable to bring even more daylight into the center of the house by bypassing the verandas.

“We also made the house ‘breathe’ with cross ventilation,” he continues, “by laying out the great room with window exposure on three sides.” Most other rooms are similarly breezy with windows on at least two sides. For the trimmings, shiplap interior walls exude informality, and four wildly wonderful abstract collage paintings from Basquiat add electric color to the space. The former, says Maria, used to trouble first-time guests. “They kept asking about patching the gaps in the boards,” she laughs. “They thought the spaces were a mistake.” And the latter, modern instead of marsh artwork? “We love art, and our view is of the marsh, so we wanted to look at something different inside,” she says.

Outside, the house sports a green tin roof, shutters, and a massive screened-in porch. A small pool rimmed with a jasmine-covered picket fence sits between the house and the marsh, palm fronds rustle throughout the backyard, and driftwood punctuates the lawn in lieu of formal sculptures. To one side, Maria says, lives an Australian and German couple, across the water are the shrimp boats of Cherry Point and Rockville, and to the right there is a well-traveled American husband and wife. It was this mix of international neighbors and coastal “countryside” that sold Maria on leaving their Parisian apartment for good and turning their Lowcountry vacation home into a year-round abode starting in 2003.

The boys, out of bathing suits and now in polos and cargo shorts, dash in, eat a few of the berries Maria bought at Rosebank Farms, and zip upstairs to paint some masterpieces. When they return—a little on the splattered side—they’ve made abstract watercolors in the same golds, greens, browns, and blues of the marsh. Their great-grandmother, Anne Prouvost, was an immensely talented painter—her landscapes, cityscapes, circus folk watercolors, and more mingle with Basquiats and Hagertys throughout the home—and her predilection for color pairings seems to be bubbling up in this generation, too.

In a flash, Nicolas hurries in, grabs little Lulu, and says there’s some animal outside she has to see. The boys are fired up, too, and all but Maria scoot out to see to the education of a young dog. Something that Nicolas said earlier comes to mind: “I think it will be difficult to get the kids out of here should we ever move away. This is all they know.” If familial history has any bearing, it’s likely that they wouldn’t stay away for long anyway.