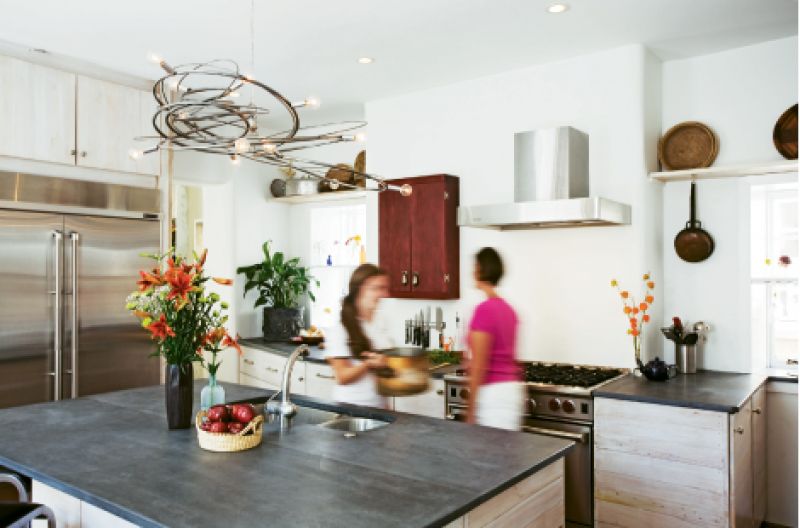 The spice rack got a little peppery. When architect David Thompson suggested they make it a stand-alone hanging cabinet in her otherwise streamlined kitchen, Nancy Worsham first balked, then eventually relented. The Johnson & Wales graduate and self-proclaimed “cooker girl” decided to trust Thompson’s aesthetic sense, but not before putting her own spin on it. “I knew it would be a focal point, so I wanted it to be interesting,” says Nancy. She’d always loved the “lady’s hands” Charleston door knockers, so she had some custom-made into cabinet handles. “I love having my spices so accessible now and that the cabinet is a mix of Asian-style
carpentry and old Charleston,” says this spicy gal, who’s willing to try new things, meld interesting flavors, and combine tangy with traditional, both in terms of her design taste and her entertaining and cooking style.

And that goes for her entire Church Street abode, which she and husband Fred renovated a few years back to reflect this even-keeled, spiffed-up, dressed-down style. Like the spice cabinet, it’s subtly infused with nods to old Charleston, especially— and what could be more Charleston?—Worsham family ties.

“My aunt Anne has had her gallery in this building since the ’70s,” says Fred of Anne Worsham Richardson, Charleston’s famed ornithological artist and the first female artist ever to receive the National Wildlife Federation’s coveted “Art Print of the Year” award. When Richardson opened her Birds I View gallery in 1972 on the first floor of the circa-1740s tenement—situated at what is now the epicenter of the French Quarter Art District—she was breaking ground both as a female business owner and as a gallery operator. “There were no contemporary art galleries other than Mrs. [Elizabeth O’Neill] Verner for many years,” she recalls. Law offices flanked her on both sides, and the second floor, which had been divided up into boarding rooms during World War II, was rented out as accounting offices. The third and fourth floors were empty shells.

Thirty-eight years later, Richardson is still actively painting and lecturing for bird and wildlife clubs, however in early 2000, after her husband died, the neighboring lawyers began expressing interest in buying her property. At the same time, Fred, a pathologist and current president of the Medical Society of South Carolina, and Nancy were empty nesters looking to downsize and modernize. After they married in 1997, Nancy moved into Fred’s rambly Hasell Street home, where he had raised three children, but now that it was just the two of them, it was time for a change. “We knew we wanted to stay downtown,” says Nancy, “so buying the property was a win-win for all of us.”

Relieved of landlord headaches, Aunt Anne kept the gallery and her framed flock where they’d always been. “Fred was always in and out of my house as a child,” says Worsham Richardson. “He and my son were like brothers. It’s a good feeling having him up there, and Nancy is a delight, easy as pie to get along with.”

Fred and Nancy’s ensuing two-year renovation project, however, was not exactly easy as pie. “Getting everything out was as hard as putting it back together again,” says Nancy. The goal was to meld old and new into a seamless, functional, comfortable, and contemporary home. Architects Reggie Gibson and David Thompson basically started with a blank slate. For example, there was no preexisting kitchen, only some cubicles and one bathroom on the second floor, along with an unfortunate stairwell with sad 1960s paneling that led down to the first-floor offices. Working with contractor Todd Poore, they gutted the office space, erased the intrusive stairs, and put the paneling out of its misery. Everything went back to its 18th-century bones, including the banister, which alone took two weeks to refurbish. “I swear, they were doing it atom by atom,” Nancy laughs, adding that restoration specialist Richard Marks even discovered a rare remnant of circa-1782 wallpaper when consulting on the project.

Where original molding stopped on an extended wall, a mod “ghost” wall was created to echo the old and segue to the new. Every bit of wood for cabinetry and doors was recycled from the existing structure and pickled to give fresh texture.

Added to the back of the house, a cozy family room and terrace now extend the living space. Bright white plaster in the den and kitchen wraps around
window openings with a sensuous curve, adding a Southwest adobe feel to the traditional wall finish. Windows, restored with enhanced casements and deep sills, are perfect for showcasing Nancy’s glassware and whimsical collections. Sunlight sieves in from both sides of the centerpiece kitchen, marinating it in light. This is where Nancy’s design taste—honed with the help of Charlotte-based decorator Jim Lavesque—reflects her talent for accentuating flavor. She combined soapstone countertops, wood cabinets, steel accents, and mod lighting to achieve the décor equivalent of a soufflé that doesn’t fall: a room that’s both minimalist and warm, earthy and swanky. “It’s my dream kitchen,” Nancy says. “I love that there’s a place for everything, and it’s intuitive. At Christmas, we’ll have six people cooking in here, and it works.”

Throughout the house, the Worshams aren’t afraid to mix it up. In the master bedroom, Asian accents blend with the original exposed beam ceiling, and in the dining room, an elegant marble fireplace juxtaposes batik-inspired drapes—“At night it looks like Manhattan,” says Nancy—and modern curved banquettes. A
colorful, creative boldness roosts in this newly rehabbed aerie, reminiscent of the marvelously diverse species on display down below. They’re birds of a feather,
these Worshams, with an appreciation for detail, an eye for the unique, and an artistry for putting bold elements together and making them fly.