Will Schutze and his marionette, Mr. Bonetangles 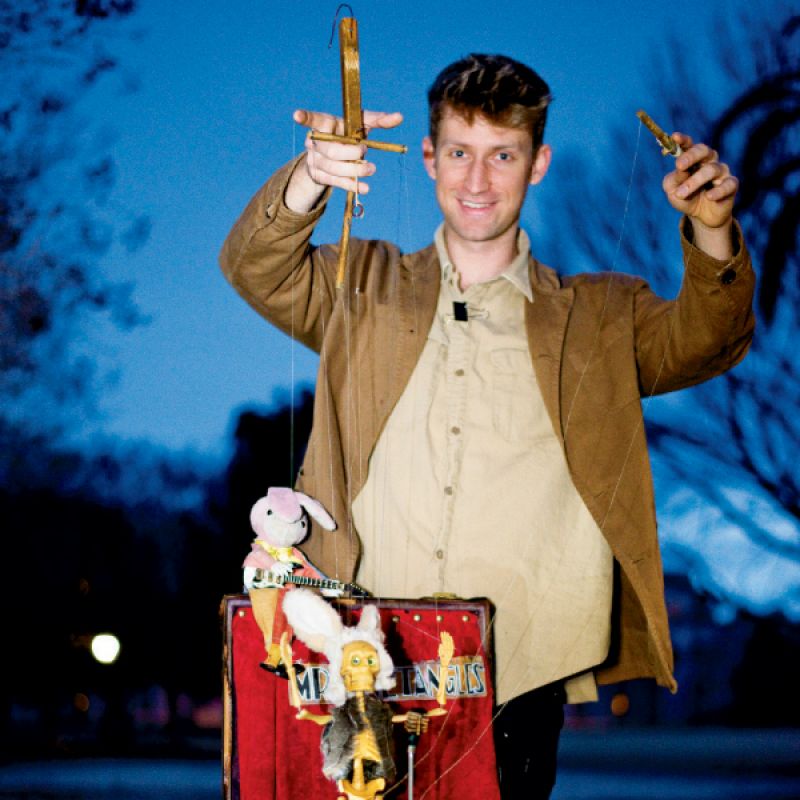 Will Schutze has the world on a string—as well as a nine-inch-tall marionette with a penchant for Al Green. Mr. Bonetangles, Schutze’s rock’n’roll skeleton of a street-performing sidekick, garnered the Texas-born puppeteer a cameo in Jon Favreau’s 2014 film Chef. The actor and director discovered Schutze out in Santa Monica by stumbling across his quirky act on an unassuming street corner. “Most sidewalks are public space we share,” says Schutze, “and we can use this space in many creative ways that remind us we are a community. We trade energy back and forth, and together, we put on a show. Simply put, street performers encourage togetherness.”

In 2011, Schutze left the star-studded sidewalks of Los Angeles, traveling cross-country before settling in 2013 on the blue-slate streets of Charleston, where he has found a new community of avid fans and curious onlookers. You may have seen him at the Charleston City Market or followed the sounds of “Tired of Being Alone” to the corner of King and Calhoun, where Mr. Bonetangles, attired in a leather vest and bunny ears, croons from atop his suitcase stage to the delight of locals and tourists alike.

But not everyone’s a fan. Over the past two years, Schutze recounts several run-ins with city police, who have often ordered him to pack up and leave his “pitch,” busker jargon for his spot on the sidewalk. After being threatened with a fine, the enterprising artist researched our municipal codes and returned knowing his right to perform, no permit necessary, as street performance falls under the category of free speech.

Schutze may be the one pulling the strings, but it’s the energy and excitement of his audience that runs the show. “A diverse collection of artists performing outside in public areas is an asset to a city. The city becomes more vibrant and full of life and laughter,” says the puppeteer. “I’ve received an extremely warm welcome to the Holy City, and that tells me Charleston can and will have more street performers.”

Schutze, along with Mr. Bonetangles and the Trubbanauts, will appear with musician Nick Jenkins in a collaborative performance at the BB&T Wine + Food Festival in Marion Square on Sunday, March 8th at noon on the main stage. Keep up with the street artist via his Facebook page or catch him on the town, on King Street, in Marion Square, or most weekend nights at the City Market.

Watch Will and his band of merry marionettes at work in this video by Fig Jam Studios: