History on the Half Shell

History on the Half Shell
February 2009
WRITER:
Damon Lee Fowler
Oysters have long been a classic on the Lowcountry table 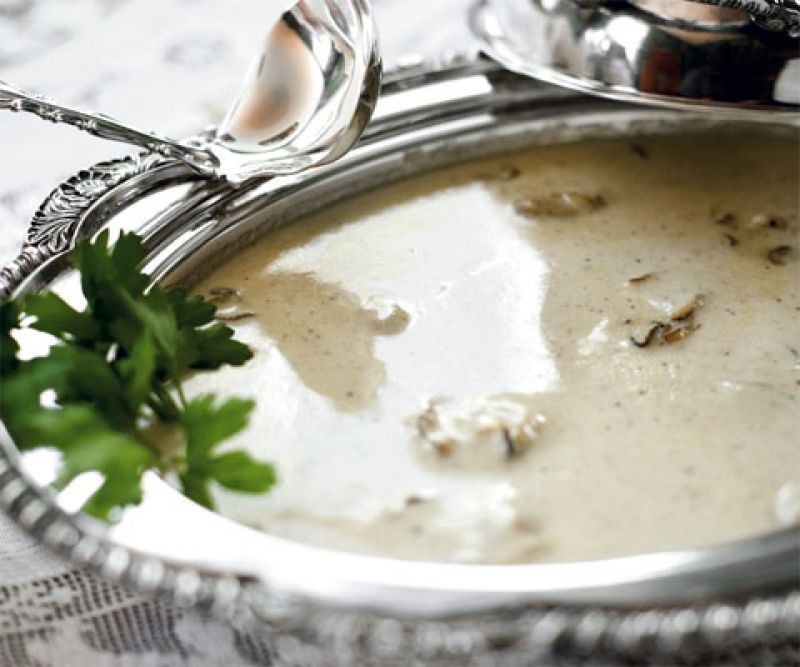 Visible at low tide, they encrust the banks of our tidal creeks, rivers, and marshes, seeming as delicate and fragile as a timeworn coverlet of old lace and velvet. But like the Sirens of ancient myth, Carolina cluster oysters only look delicate: their apparent fragility and heady, yet oddly beguiling, aroma have lured many an unwary gatherer into a painfully lacerating embrace.

Local oysters are known as clusters, because that’s how their shells develop in the beds—in tightly interconnected condo-like clumps with protective edges that are sharp and dangerously irregular. They rarely get to be as large as oysters that grow elsewhere in beds with loose, easily harvested individual shells, and their tight, razor-edged clusters make them a challenge to harvest and shuck. All the same, wise Charlestonians have long known that it’s well worth risking a few cuts to get at the beauties inside. While our cluster oysters may not measure up in size to their fat, luxurious cousins in the Gulf, Chesapeake Bay, or Pacific Coast, their intense, salty-sweet flavor more than compensates for their drawbacks.

Locals who are passionate about these briny morsels believe it’s probably no mere coincidence that Charleston’s old social season parallels the season for harvesting oysters in the fall and winter months. And who’s to say that it was only the mild sea breezes of autumn that used to lure Charleston’s elite back onto the peninsula after they’d retired to more friendly climes during the brutal summer months?

Folklore held that months that have the letter R in their name were the only time that oysters were safe, and of course, in the days before refrigerated storage, such a belief had some merit. In the searing heat of a Lowcountry summer, consuming bivalves that weren’t freshly harvested could indeed be a risky business. But the real reason that savvy diners avoid summer oysters is quite simply that they don’t taste good. As the water warms, the oysters begin spawning; their flesh becomes milky and tastes as flat and murky as it looks. But as the waters cool and their primeval urge to reproduce is satisfied, their flesh firms and once again recovers its salty-sweet flavor.

Oysters have been a steady part of the local diet since before European colonists settled the peninsula. Pre-Colombian mounds of discarded shells are scattered throughout the barrier islands and marshy mainland of the region, and the oyster roast—that venerable Lowcountry institution that has commemorated many a birth, graduation, and engagement—almost certainly has Native American roots.

For the most part, however, the oysters that were not eaten cool and crisp from their shells or hot and succulent from those roasting pits have been prepared for Charleston tables using time-honored recipes that the colonists brought with them from Europe—recipes that are, significantly, still commonplace in Charleston kitchens today.

They’re poached in their own liquor or in a thick, rich cream to serve over toast points or as a sauce over roasted turkey and chicken. They’re garnished with bacon and baked in their shells. They’re nestled in cream, topped with bread crumbs and baked in individual scallop shells (from whence comes the name “scalloped”) or in shallow gratin dishes. They’re simmered in milk and cream for homey stews and chopped and folded into suave, sherry-laced bisques. They’re tossed with stale bread and stuffed into turkeys, chickens, and small game birds, such as local quail, marsh hens, and once upon a time, the delicate ricebirds that fed in the fields dotting the marshy countryside. They’re rolled in cornmeal and fried to a luxurious golden brown.

One of the most ubiquitous of these dishes is creamed oysters, sometimes found in old cookbooks under “chafing dish oysters,” named after the vessel in which they were made and served. Ladled from sparkling silver dishes over crisp toast or pastry cups, creamed oysters were almost as indispensable to ball suppers as Champagne punch. But they were also known to grace the table at dinner as a side dish and even made an appearance on breakfast buffets. Creamed oysters remain popular today, though they’re more frequently found on cocktail buffets or as an elegant beginning to formal dinners.

Of all the early 19th-century American cookbooks, Charleston’s own venerable The Carolina Housewife gives oysters their most sympathetic and extensive treatment. Published anonymously by Sarah Rutledge in 1847, this bible of Lowcountry cooking contains more than a dozen recipes for this shellfish, most of which are still in use. Its Cream Oysters recipe, with simple seasonings of nutmeg and pepper, remains the local standard. Modern cooks often add a touch of cayenne, a splash of dry sherry, or the occasional spoonful of grated onion. Sometimes mace is substituted for the nutmeg.

In Charleston Receipts, the modern standard for local cookery since 1950, we find a version in which a few sliced mushrooms and diced pimientos are added. But Miss Rutledge’s classic recipe really can’t be improved upon, and its sensible core has not changed since she set it down more than 160 years ago. To truly savor local cluster oysters at their best, wise cooks do well to trust Miss Rutledge and rediscover this timeless classic.