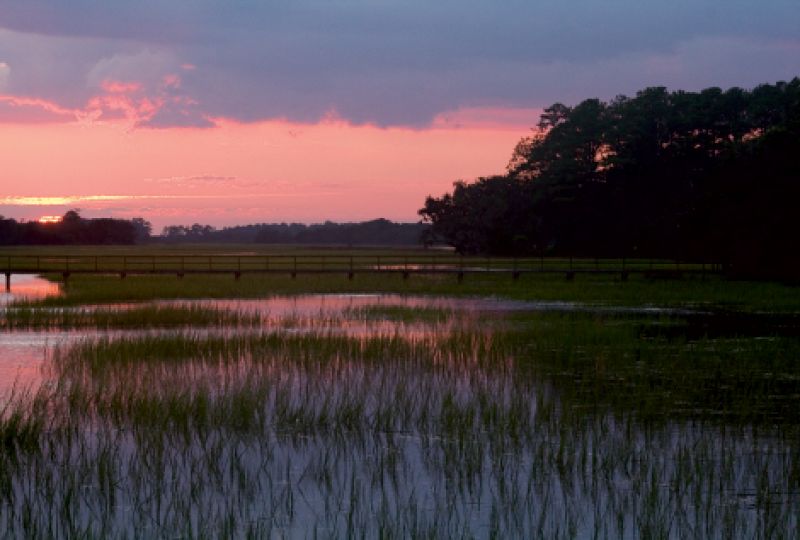 The first time I experienced Edisto Island’s Botany Bay Plantation was with Jude Law. Sure, there were van loads of other folks with us—director Anthony Minghella, a host of producers, a gaggle of production assistant types like myself, and extras galore—but still. We were all on the then-private property to shoot two scenes for Cold Mountain in which Law’s character, Inman, treks across the marshes on his way home after deserting the Civil War. Putting new meaning to the phrase “testing his acting chops,” he grabbed fiddler crabs and pretended to stuff them down out of starvation. Out there, on the 4,687-acre seaside plantation, with its pristine lagoons and oak allées, he did indeed look lost in the wilderness.

Later, when we moved to the beach to film a bedraggled parade of wounded soldiers, the untouched, wild feel of the place was even more abundant. In shallow tidal pools, enormous blue crabs waddled about, so plump, slow, and unsuspecting I could have stepped on them with my boot and had a crustacean supper myself. It reminded me of how early colonists described the Lowcountry: rivers rife with fish, oysters fat with meat, woods pregnant with game, and all of it nearly jumping into the hands of anyone who sought sustenance. Along the shoreline, swaths of football-sized conches stretched on seemingly forever. I’d never seen such shelling in my life, nor a beach without footprints (at least till we showed up), and the effect was nearly as otherworldly as seeing the tattered Civil War folks in the distance.

That was nine years ago, and in 2008, the place became Botany Bay Plantation Heritage Preserve/Wildlife Management Area, open to the public thanks to the South Carolina Department of Natural Resources. Recently, on one of those freakishly warm days that sometimes hit this time of year, I headed down with a Charleston newbie from New Jersey. We skipped the historical relics—a well from the 1700s, a slave house chimney, an 1800s icehouse, and more—and went straight for the beach. There were a handful of other folks there, so we aimed north toward Seabrook Island for some easily won solitude.

It was high tide, and we had to pick our way through a tangled collage of driftwood, “boneyard” oaks—dead, skinless, but still firmly rooted in the water—and palmettos. A rough storm had recently cut away at the beach, leaving miniature cliffs with exposed striations of old oyster shells.

My friend said that it reminded him of West Africa, the Ivory Coast in particular, and asked if the shells that were hanging from the palmetto ribs here and there had been washed up on them. It surely looked possible, but instead was actually, like the rows of shells lined up on this or that slab of driftwood, just the sign of visitors past. As of last year, taking shells from Botany Bay is forbidden, but shelling, treasuring, and displaying the finds while you’re there? A near-compulsion.

We slipped into the water, reveled in the gift of latitude—swimming in an “r” month—and talked about how strange it was that slaves were stolen from an area that look so similar to this slice of the world. Did it provide some cold comfort, the familiarity, or was it just a tormenting twist to their maddening ordeal? As we bobbed in the ocean, the shells that hung around our cove took on a voodoo vibe. Undoubtedly there need not be costumed soldiers present to transport one to times and peoples past. Like the slight haze that clings to the water’s edge, their presence is part of Botany Bay’s very atmosphere.

Botany Bay Plantation is off State Hwy. 174 toward Edisto Beach. Look for a driftwood sculpture with signs in the marsh opposite the turn-off. There’s no fee, but you have to sign in before you drive, bike, or hike the 6.5-mile loop over the property. It’s open daily, except on Tuesdays and during occasional hunts, from a half-hour before sunrise to a half-hour after sunset. Visit preserveedisto.org.