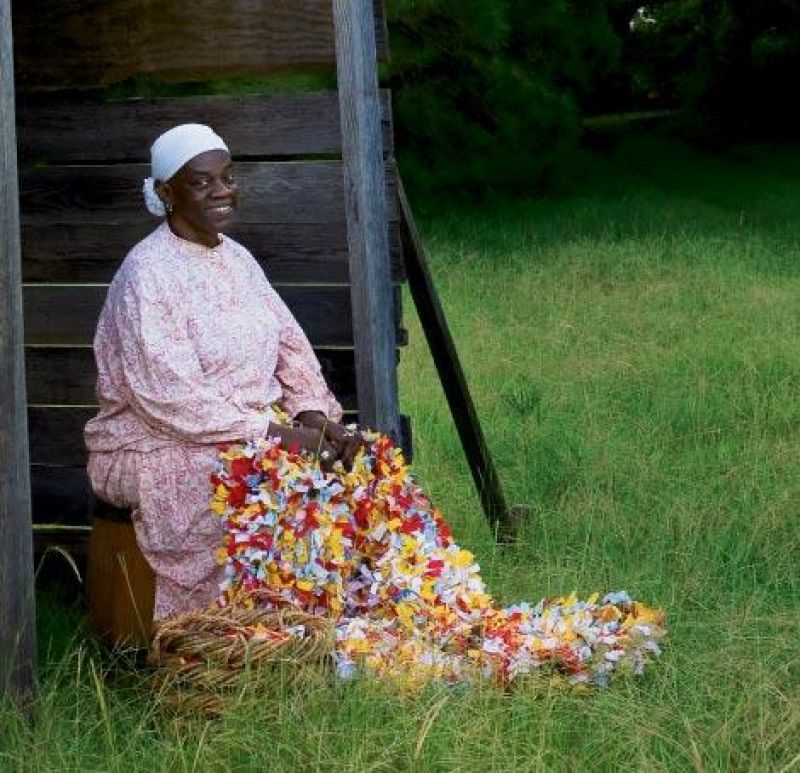 Though she travels the East Coast as “The Gullah Lady,” Sharon Cooper-Murray isn’t Gullah at all. She was born in Lake City, moving to the Lowcountry at age 22. But when she married Wadmalaw native Frank Murray in 1984, she became a foreigner in a culture with its own language and folkways. Determined to understand the community, she began to research, becoming so enthralled that she decided to share what she learned with a wider audience. Two decades later, she’s an in-demand, Gullah-speaking storyteller and also leads workshops and demos of rag quilting, an art form that involves knotting strips of cloth to a burlap base. We sat down to learn about her work.

CM: How did The Gullah Lady come to be?
SCM:
I started out doing lectures and demonstrations of work skills like hand-processing rice, but then got into storytelling. I’d collected a lot of stories while doing an oral history project, interviewing dozens of seniors on Wadmalaw. They all told stories, and those stories were funny and interesting, usually with a little life lesson wrapped up in them. I started retelling the stories and things took off from there.

CM: Why is storytelling important?
SCM:
Because the way you get to know a culture is by listening to its stories—they tell you what people find interesting, what they think is funny, what they value.

CM: How did you get into rag quilting?
SCM: My great-grandmother had a remnant of a rag quilt she put out only at Christmas. I’d forgotten about it until I walked into the community center on Wadmalaw and found seven people working on one. I started hanging out with them and learning the art myself. By 2010, all of them had died or grown too old—I was the last one doing it, which meant we were a heartbeat away from no one doing it.

CM: So you started the Community Rag Quilting Initiative?
SCM: Yes, in 2011, I began doing workshops and demonstrations to spread awareness about the folk art and hopefully help develop a cottage industry for it on the Sea Islands. During each event, I invite participants to tie pieces to the community quilt—so far, people from 15 states and three countries have added to it. I hope there’s someone at each event who will find a way to put their own personal spin on the age-old tradition, to make it more relevant for the moment. That’s what keeps it alive.

CM: Do you see your efforts paying off?
SCM: Oh my gosh, yes. For example, I led a workshop for the senior citizens group at Hebron Church on John’s Island, and they have already worked together to finish a quilt.

CM: What do you enjoy in your free time?
SCM:  I love movies, especially sci-fi and action. I have seen every one of Steven Seagal’s films—his karate is the funniest type of karate—and I still like him today even though he’s gotten fat.