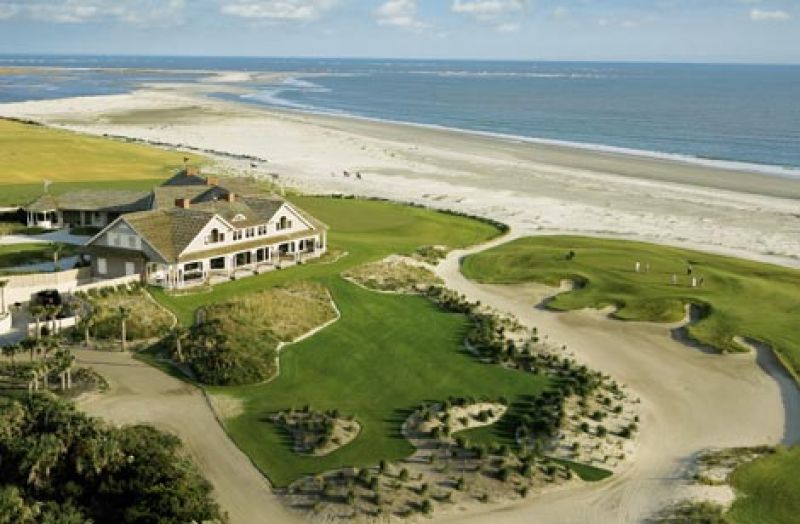 Ah, yes, the course—the famed and formidable Ocean Course will be front and center and as feisty as ever, thanks to its mastermind, Pete Dye. The man is to the modern game of golf what the late Steve Jobs is to users of modern technology, minus the bravado. Actually, minus any bravado or ego at all.

Like Jobs, Dye is a tinkerer, a perfectionist, an intuitive designer, and a creative visionary at the top of his game. But first and foremost, he’s an 86-year-old boy who loves playing in sand and dirt. Talk to this World Golf Hall of Famer (one of only five course architects ever to be inducted) about creating the 18 holes that Golf Digest has called “America’s Toughest Resort Course” and ranked the country’s fourth Best Public Golf Course, and you’ll likely get his typically modest, Andy Griffith-like Aww shucks, it’s just some grass, a little sand, and water kind of response.

“I enjoy building golf courses,” says Dye, who has designed more than 100 of them during his 50-year career, seven of which have hosted major tournaments, including the Ocean Course, which this year becomes the first Dye course to host both a PGA Championship and a Ryder Cup. “I never draw or sketch things out, I just start digging around,” he notes. “We’re a small operation. I don’t know what it is exactly that I do. I just go out there and try to build 18 different holes, then Alice comes in and she throws in her thoughts.” Alice, his wife and design partner and an accomplished golfer like her husband, actually gets the credit for arguably the most noteworthy aspect of the Ocean Course—its namesake ocean views. “On the front nine, you could see the ocean the whole time, but as originally planned, you didn’t see it on the back nine. I told Pete, ‘People don’t want to play by the ocean and not be able to see it from every hole,’” she says. Fortunately, Dye is wise enough to listen to his wife.

The Dyes first came to Kiawah sometime in late 1988 with the task of teasing out a golf course from a narrow, two-and-a-half-mile stretch of scrubby maritime forest and marsh on a sparsely developed backwater called Kiawah. And oh yeah, the prestigious Ryder Cup would be played there in ’91, the first time that the elite international tournament had been awarded to a course that did not yet exist. Then just as the lengthy permitting process was finally complete and work was ready to begin, Hurricane Hugo blew through with a bit more than a bump-and-run, more like a big bad Bingo, Bango, Bongo—making an already rushed and high-pressure project even more encumbered. When PGA officials visited Kiawah to check on progress in advance of the Ryder Cup, “they almost threw up,” writes Dye in his 1995 memoir, Bury Me in a Pot Bunker.  But Pete and Alice not only pulled it off, they created a course that catapulted the ’91 Cup into historical superlative territory, setting the stage for a dramatic down-to-the-wire “War on the Shore” ending.

Unlike 1991, PGA officials this year are far from nauseous in anticipating course conditions for the heralded August 6-12 PGA Championship. Over the last quarter of a century, the Ocean Course has become world renowned for its unparalleled and almost mystical beauty as much as for its diabolical wind-borne challenges. And it’s in championship shape this year thanks to Dye’s numerous visits over the last 18 or so months to tweak bunker approaches and fine-tune the tees. “Yep, Mr. Goodwin [Kiawah Island Golf Resort owner] hired me back. Don’t know why he did,” Dye deadpans. “Guess I get to come back 25 years later and fix all my mistakes.”

The game has changed since he and Alice first built the Ocean Course, Dye notes, pointing out improvements in equipment and player conditioning. “A lot of the old tees I put in I didn’t think would ever be used.” Tweaks in preparation for August include extending the bunker on the 13th hole a little farther out, “because now they can carry a drive 300 feet,” Dye explains. The 11th hole got “cleaned up a little to the left” in hopes, he says, that “a pro will go for the green in two.” The 17th hole needed attention as well, not so much for the way it plays as for the “ambiance,” given the addition of 54 sky boxes around it and thousands of ticket holders.

But ultimately, what makes a Pete Dye golf course? “I try not to have any kind of style; I do them all different. I don’t wiggle my bunkers so much, and I always try to make the finishing holes more difficult, so a pro player can end up losing by one or two shots on the last holes,” he says. “But it’s really the ambiance of what you see when you’re playing. A player may go out and shoot 100, but it’s what they see on the edges and around it that makes it memorable.

“I like to say the Ocean Course walks and swims,” Dye continues. “It changes all the time because of the wind and the way the sand blows. I talk to the superintendent and the players, find out how it plays, then modify. I’ll be anxious to see what the players say in August,” he adds. “I’m always scared to death it’ll play bad, but I hope it’ll play good.”

A Family Affair
In addition to Pete and Alice’s contributions to golfing’s landscape, their sons, Perry and Paul, have extended the family tradition with Dye Designs, a golf course design business based in Colorado. “Paul actually does drawings, I just like to do the building, always have,” says Pete.

In 1998, the Dye clan was given the “Family of the Year Award” by The Metropolitan Golf Writers Association and named “Golf Family of the Year” by the National Golf Foundation. All four Dyes belong to American Society of Golf Course Architects (ASGCA), the only golfing family to hold that distinction. In addition, Alice became the first woman president of the ASGCA and the first to serve as an independent director of PGA.