The Faraway, Nearby
June 2010
WRITER:
Stephanie Hunt
PHOTOGRAPHER:
Peter Frank Edwards
It’s off the grid and on the dock for two families at their rustic island getaway 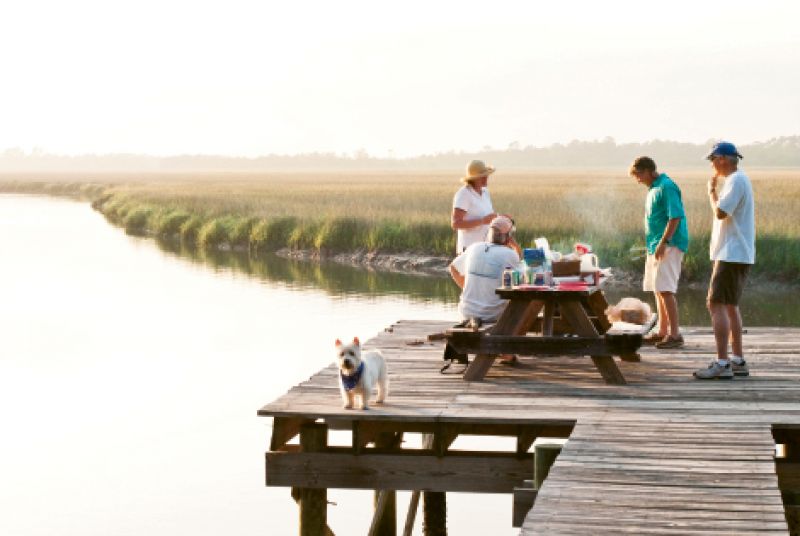 Sometimes simplicity isn’t all that simple. Like when it entails clearing 50-plus 80-foot pine trees, one by one, by hand. Or when trying to maneuver a huge, unwieldy septic tank across a waterway on a 17-foot boat, and then into the ground, with only two men and a shovel. Or when you have to figure out logistics for transporting massive pilings via military landing craft across said waterway and then, oh yeah, the small issue of the pile driver. All for a simple cabin on a slim wisp of an island, and for the sweet, simple dream of finding the faraway nearby, complete with watercolor sunsets and breezes shushing through the pines.

But the complexity involved in building “simple” has more than paid off for Beth and Tim Harrell and Susan and Steve Herlong—Sullivan’s Island neighbors, longtime friends, and fellow boating enthusiasts who shared a vision of a serene, pared-down island getaway. They happened upon this pristine spit of tall pines, saw palmettos, and scruffy palms by chance, while exploring other local real estate options, and jumped at the opportunity to partner with several others to buy into the island; a former owner had intended to add electricity and water service and develop it. Despite being only a 10-minute hop from Folly Beach, the spot feels remote and wild; and protecting its raw natural beauty was part of the Harrells and Herlongs’ motivation.

They acquired the property in 2000 and began clearing and construction shortly after. “And we’re still not finished,” laughs Tim, pointing to the soon-to-be enclosed storage area below the elevated abode and a host of other to-dos. “There’s always something; it’s definitely a work in progress,” he adds. Even so, it’s evident that much of the enjoyment and satisfaction of this retreat stems from the families’ personal investment of sweat, toil, and vision.

“We built it mostly by ourselves,” notes Steve, an architect and principal of Herlong & Associates, who drew the plans. The Herlong name is synonymous with high-end custom homes along the coast, most of them six to 10 times larger than this 800-square-foot ode to efficiency. While the streamlined cabin is a departure from what Steve typically creates for clients, it reflects his insistence on quality and passion for ship-shape ingenuity. He and Susan spent several years living and traveling aboard a sailboat: “We know about self-sufficiency, having to supply your own water and electricity. We wanted this to be as simple as it could be and still be comfortable,” he says. “Steve is a genius at designing and orienting houses to take best advantage of the views,” says Beth. “This design is 99 percent his vision. It was his idea to go up like a tree house or tower and to use an upside-down floor plan to maximize usable space, capture the views, and escape the mosquitoes.” Once they determined the ideal location, Steve and Tim got down and dirty clearing the land and building the dock to get boat access for people and materials. Beth served as general contractor, masterminding the hair-pulling logistics, including keeping the framers happy as they camped out for weeks at a time, like a hybrid cast for Lost and HGTV. Tim brought over the cypress panels “stick by stick” and finished the walls and interior trim with help from his friend Glenn Braddock. Beth and Susan collaborated on the nautical-inspired colors and interior décor, with an eye toward relaxed and easy, functional and fun. Sustainability is a cabin hallmark, by necessity. “We began this project 10 years ago, before ‘eco-architecture’ was so mainstream,” says Susan. They use a gas cooktop and outside grill, cache and recycle rainwater from a large cistern, and rely on solar panels and a battery bank for what minimal electricity they use, with plans to upgrade those now that the technology has evolved. But again, simplicity was more the guiding principal than eco- sophistication. “We kept asking, ‘What do we really need? What can we do without?’ That’s truly the way to think green,” Steve adds.

Cozy sleeping spaces can accommodate six (plus however many want to pile on the sleeping porch), and one airy kitchen/living room does everything else. No extraneous interior space here—the focus is on outdoor living. “No TV, no Internet, no alarm clocks. That’s not what it’s about,” says Beth. And that seems to be fine with 17-year-old Palmer Harrell, who grew up over the course of the construction, put his share of muscle into various projects, and now reaps the rewards. He loves coming out here to fish, boat, wander, and just hang out, unplugged. The families kick back by candlelight at night and frequently invite friends to boat over for impromptu oyster roasts. “We had a surprise 80th birthday party for my mother out here—a fishing tournament!” says Beth, who obviously hails from “good sport” stock.

It’s not necessarily an easy getaway, Beth confesses. “It takes a lot of effort and planning to pack up supplies, drive to the marina, then boat over and haul everything to the house, just for a night or weekend away, only 10 miles from home. Sounds crazy doesn’t it? But it’s a good kind of effort.” With a smile and a sigh, she sits back in her favorite wicker chair and adds, “It’s just so quiet. Listen….” And there’s only the simple, transporting sound of silence. A bare whisper through the pines.