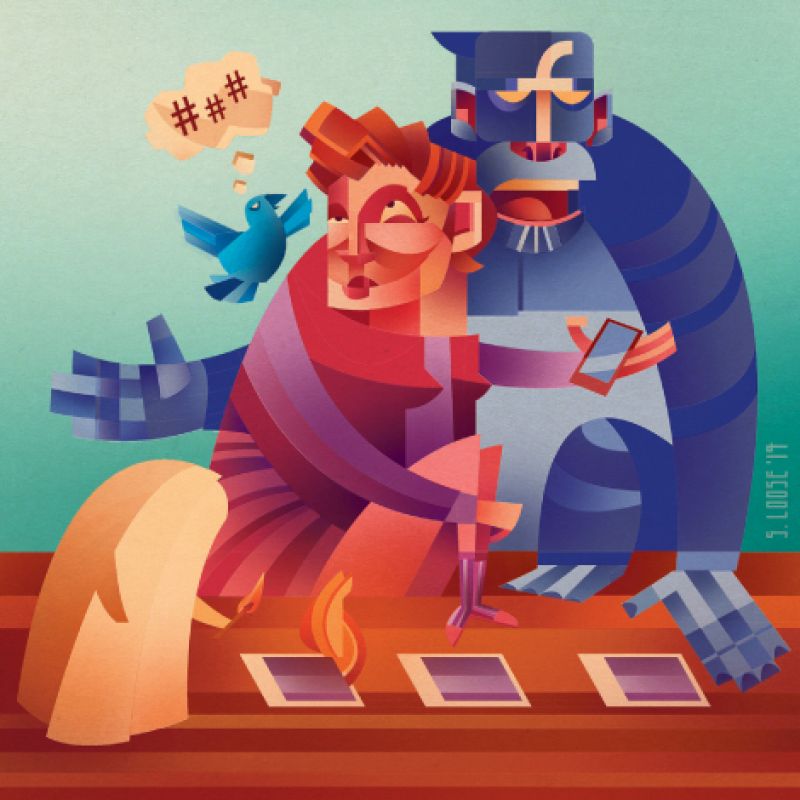 With Charleston’s popular digital conference, DIG SOUTH, returning this month, I thought I’d provide people my age with an explanation of what all the fuss is about. If you’re a borderline Luddite like me, the brave new world of interactive communications and social media can be confusing. In fact, even the lexicon is confusing, so you and I nod along in a manner usually reserved for when a sommelier discusses the wine list. Here’s what I can decipher:

First, “interactive” means people will—instead of communicating in the manner done since cavemen grunted their greetings—use their computers to converse. To you and me, interaction occurs when two humans meet and, well, interact—but don’t get confused this early on. Interactive = communicating.

Social media is another bit of verbal trickery. What it actually entails is anti-social behavior, like when your great-aunt locks herself in the attic and only gets information from the newspapers you slip under the door. In social media, people “socialize” by using the Internet to pass issues of The Daily Me-Me-Me to each other. Thus, social media = sharing a newspaper.

Within social media, the 800-pound gorilla is a thing called Facebook. Think of this networking site as a newspaper printing press outside your crazy great-aunt’s door. You can print out thousands of pages of drivel covering everything you do, see, think, or eat. Without proof-reading or fact-checking, you stuff the pages under the door. This will give your great-aunt something to do as she spends 18 hours a day weeding through it to find something she cares about. Facebook = a friend who never shuts up.

Twitter is also a mainstay. For it, you can write very short, incomplete sentences and send them out over the Internet to your “followers,” those being people who sign up to read what you have to say. Of course, no one cares what you have to say unless you’re a bigwig, but that doesn’t stop the average citizen from creating a Twitter account. Again, let’s go back to your great-aunt. One day she sticks her head out the attic window and sees a lunatic down on the corner eating his shoe and shouting at passersby. Your relation yells some insanity out to him, and the doomsday fanatic screams back at her. Both are very excited, because they think the other is “following” what they have to say. After dark, the lunatic forgets what planet he’s on and wanders off, but your great-aunt doesn’t know it—so she spews forth her insanity into a world where no one is listening. Twitter = crazy people talking to no one.

Enter SnapChat. Parents are now using Facebook, which has their children running away from it like locals from South of Broad. Kids are switching to SnapChat, which enables them to send pictures and videos to their friends, with the nifty feature of said images disappearing 10 seconds after viewing. This is popular because if you send out a photo of your 19-year-old self drinking a 40-ounce Schlitz, you don’t want it to be on your permanent record. SnapChat = watching your great-aunt’s slide show of her trip to Dollywood, with her burning each slide as she goes.

Another hot new social media thingy is Tumblr. To understand Tumblr, you have to understand the concept of a blog, which is a nickname for “weblog.” A blog is an open diary on the Internet for all to see. This is where the world’s worst writers gravitate to write about topics like… forget it. Anything. Mostly never-ending ramblings about stuff the writer hates or likes or both or neither. From there you can understand Tumblr, which is a microblog… maybe a picture and a sentence. This makes Tumblr far superior to a regular blog, because the user is forced to shut up before long. Blog = your great-aunt on meth blabbering on about “today’s kids.” Tumblr = your great-aunt showing you her photo album with a brief commentary on each of the 9,000 pictures.

Does all this make sense to you now? Me neither. We’re looking at the ice cube on the tippy, tippy top of the iceberg that sank the Titanic. You see, all this stuff is connected, and your kids understand how it all works. If you tried to chase down what they know by the time they’re 10, you’d need to pass Through the Looking Glass, slither through James Joyce’s Ulysses, run a lap through four Faulkner novels, and crawl back up through J. Alfred Prufrock.  #don’tbothertrying.

Prioleau Alexander is a freelance writer and advertising consultant. He doesn’t always blog, but when he does, it’s at CharlestonGrit.com, and it’s brilliant. He can be reached at LittleFishConsulting@yahoo.com.