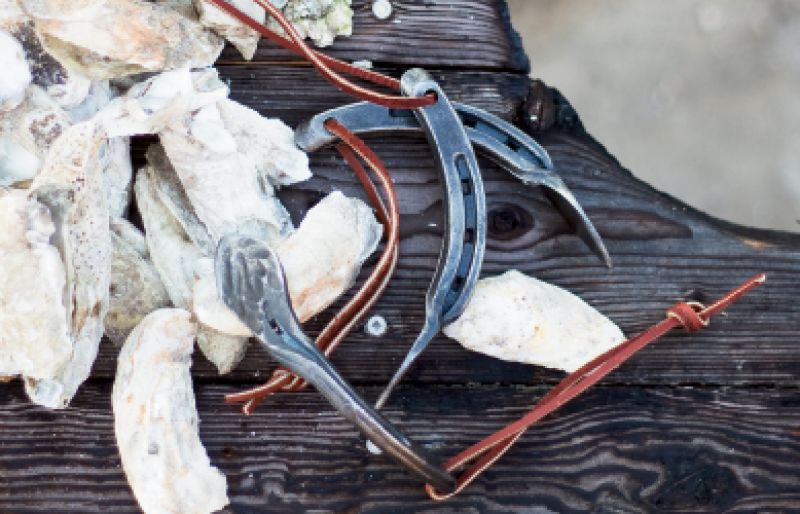 It’s oyster season, and thanks to Will Altman and Josh Silverman, you can pig out in down-home style with the Lucky Shucker. Hand-forged from a horseshoe, the shucker is the debut product from Blind Hog Designs, the company Altman and Silverman launched last November. The business’ name gives a nod to Altman’s other gig as the owner/operator of Righteous Ranch, which supplies locals with farm-raised heritage pork. While puttering around the farm one day, Altman spotted an old box of used horseshoes and decided to pick up a new trade. “I’ve loved inventing things since I was knee-high to a grasshopper,” he says.

While Altman could handle development, design, and working the forge, he called upon Silverman, owner of Jericho Advisors, for his expertise in business management, sales, and number crunching. “I’m Chief Mad Scientist, and Josh is Chief Wrangler of the Mad Scientist,” Altman jokes. The duo recently introduced the Drinking Buddy bottle opener for pre-order, with additional culinary tools soon to arrive at www.blindhogdesigns.com as well as stores including Out of Hand, Avondale Wine & Cheese, and Sewee Outpost.

The dish on Righeous Ranch

Will Altman’s got to be one of the busiest guys around. In addition to creating products for Blind Hog Designs, the Florence, South Carolina, native is a salesman for his family’s New Holland tractor dealership and runs his Righteous Ranch hog farm in the town of Evergreen. There, he pasture-raises a heritage-breed pig called the “mulefoot,” selling the meat locally at the Homegrown Farmers Market on John’s Island and—as of April—the Sunday Brunch Farmers Market on James Island. He also recently introduced Porky Packs: for $50 once a month, customers pick up about 10 pounds of bacon, sausage, and chops from locales in Columbia, Florence, and Charleston. Learn more at facebook.com/righteousranch.