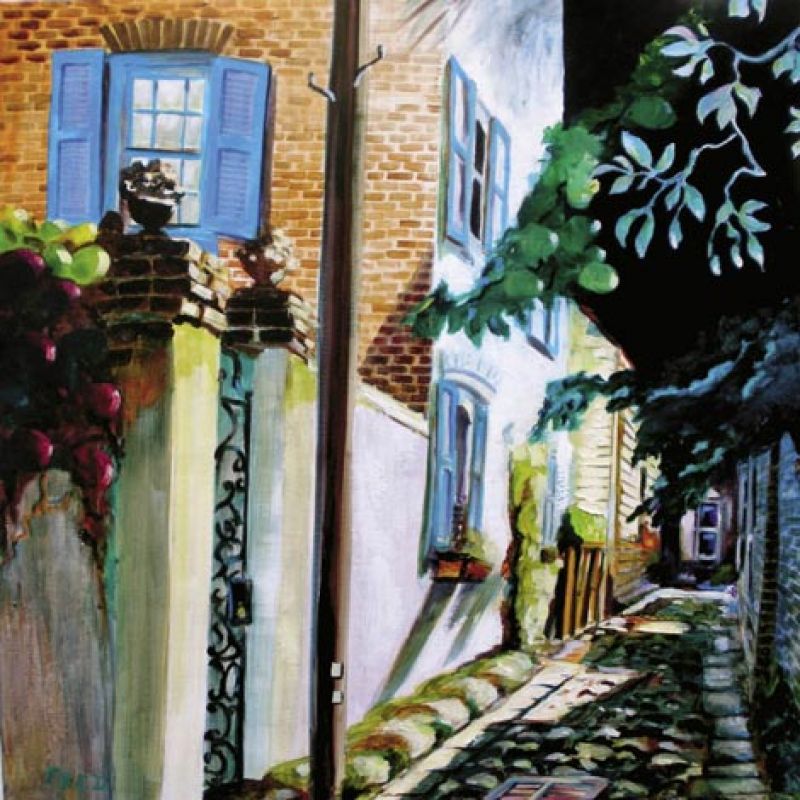 I landed in Charleston on July 1, 1993—the first day of the city’s hottest July since 1895. My husband, infant daughter, and I felt warmly welcomed, literally, by 17 days of 100-plus mercury. So much for Southern hospitality. It’s a blur now, mostly because my sunglasses were constantly fogged up from walking out of our hyper-chilled apartment into the scorching summer soup.

We’d moved from Boston, where AC was unnecessary and summers delightful, and where, just four months earlier, we’d survived the “blizzard of the century.” The residual dingy snowbanks had only recently, it seemed, melted, and now here I was in subtropical Charleston—a new landscape of palm trees and Palmetto bugs, a new mom in a new town, melting into a new life.

I knew no one, and because we were living in temporary quarters until our house became available, I had nothing to do—no boxes to unpack, no nest to feather. The extent of my daily agenda was nursing, diaper changes, and naps, so after my husband left for work, taking our only car, my four-month-old daughter and I would venture out to sweat and wander. Some mornings, we simply moseyed around our pseudo home base—the small one-bedroom kitchen house connected to an elegant manse on the Battery that was my first, and finest, Charleston residence. Our pad opened up into a large, formerly formal garden, where we meandered around the remnants of an old boxwood maze that had lost its manicured edge. Our landlord mentioned that this was a Loutrel Briggs’ garden, which meant nothing to me at the time, but even I, a green-thumb flunky, could appreciate its good bones.

On the mornings when a blessed breeze made longer adventures bearable, I’d tuck my daughter into her Snugli and strap her to me like I was Sacagawea and the peninsula uncharted territory. Setting off along the Battery, or over to Meeting and King, I’d walk out of the fancy iron gate of “our” abode, making a point to catch tourists’ eyes and walk confidently with an I-belong-here air, as if I was indeed the lady of the house. So what if I was the lady of the kitchen house, a recent transplant, and a short-term SOB/Battery interloper at that.

But the truth was, despite my airs and wilting attempts at finding a foothold in my new neighborhood, I felt like an interloper, a tourist. Charleston seemed like a place of passersby, of folks pointing and clicking their cameras, oohing and aahing at architecture, rather than real people heading home to weed those famous gardens or to put up their feet on those lofty piazzas. I felt as if I’d landed in a world of big things: overwhelming heat, supersized history, gigantic pineapples, enormous homes with mega-mouldings; and I was just a small person with a very small child. I feared I would always be merely a peripheral observer here, not a belonger. At least until I stumbled upon the hidden places.

I found them, the small crevices and tiny byways, as I was walking along East Bay with a loud distressed baby and was desperate to take cover, to duck into shade. I’d passed by the small openings that mark Longitude Lane and Stoll’s Alley many times before, but had been so focused on the main drag’s impressive homes and landmarks that I barely noticed them. But there, hidden from tourists and traffic, I discovered the whispered welcome of Charleston’s tucked-away lanes, the allure of her overlooked alleys, the way their cool quiet beckons, like a secret waiting to be revealed.

On Longitude Lane, the way is narrow, and the path straight, more or less. The worn cobblestones demand that travelers take it slow; they gave me reason to pause and imagine what life here was like centuries ago, say, in the searing heat of 1895 before tank tops and Freon. Not far from Longitude, Stoll’s handsome brick path is a mere breath, a tiny gasp between two dense walls; and yet I followed it. The narrow passage widens into a soothing, relaxed sigh, opening to a charming enclave of gambrel roofs and courtyards of moss and ferns. In both these alleys, the scale is intimate and inviting, the paths quirky and mysterious.

Feeling tuned in to the pleasures of Charleston’s roads less traveled, I discovered the alley leading off of King Street into the magical and haunting graveyard garden of the Unitarian Church. I hugged my daughter, limp and drugged by the heat, close as I wandered amidst headstones, winding through overgrown azaleas, drooping crepe myrtles, and crumbling marble reminders of life’s cruel brevity. I felt the layers of history, as thick and heavy as the humidity, that would continue to reveal surprises and the depth of beauty in my new hometown.
It was then that I realized I could find my way in a city that harbors such hidden places. That it is here, along these little pathways in an old city of big things, that I discover glimpses into Charleston’s inner life, where tender details trump showy façades, where the heat and crowds give way, where her hushed grandeur lies.