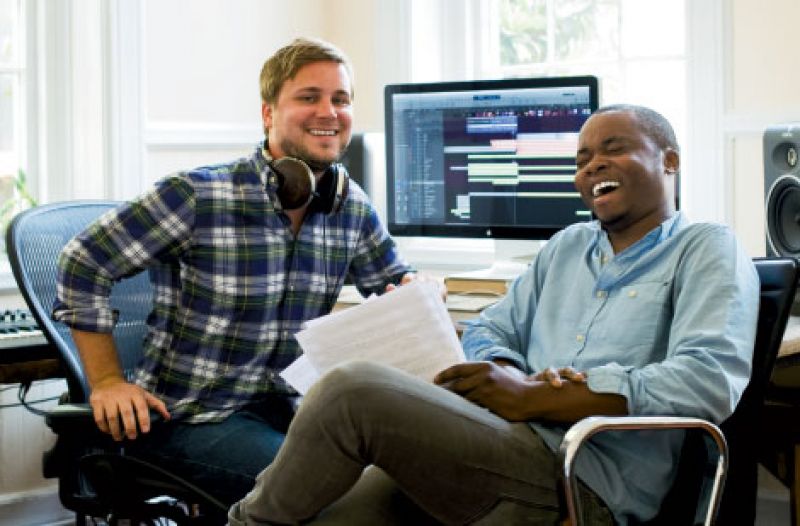 When Alex “Admiral” Collier struck up a conversation about film scores with Josh Smoak during high school band class at Charleston County School of the Arts, neither had any idea how far-reaching it would be. The pair went on to study film scoring and production at Berklee College of Music in Boston, then returned to Charleston to start their own business in 2006. Today, they are the sole operators of Sunday Entertainment, producing original music for film, television, and advertising clients including Quiksilver, TOMS, and Google.

Intermixed with computers and recording equipment in their Broad Street office are myriad new and vintage instruments. Both men are skilled on keyboard and trumpet‚ with Collier touring internationally as keyboardist for indie band The Weeks.

Projects come in at various stages, from complete videos to rough storyboards and scripts. “It all starts with a conversation about what the director or producer envisions,” says Collier. Then the two compose and record, working on revisions and approvals before submitting the completed score.

Sunday Entertainment’s musical aesthetic, explains Smoak, makes the most of the latest technology, but “with vintage, Hollywood-studio-style orchestras in mind.”

Quiksilver: “This commercial was one of our first projects that had the sound we wanted to be known for,” says Smoak. “Alex borrowed a set of some 36 handbells that he laid out all over the office. He did the entire 60-second recording by running back and forth between the bells and computer, recording over and over again.”

Popular Science: “For the four-video America's Road to Energy Independence series, we created a template based on a 60-piece orchestra setup and replaced each instrument with really cool vintage-sounding electronic instruments,” explains Smoak. “This allowed us to write in a traditional style and create multiple cues that sound alike, so when we piece them together at the end, they create one giant, awesome-sounding piece.”