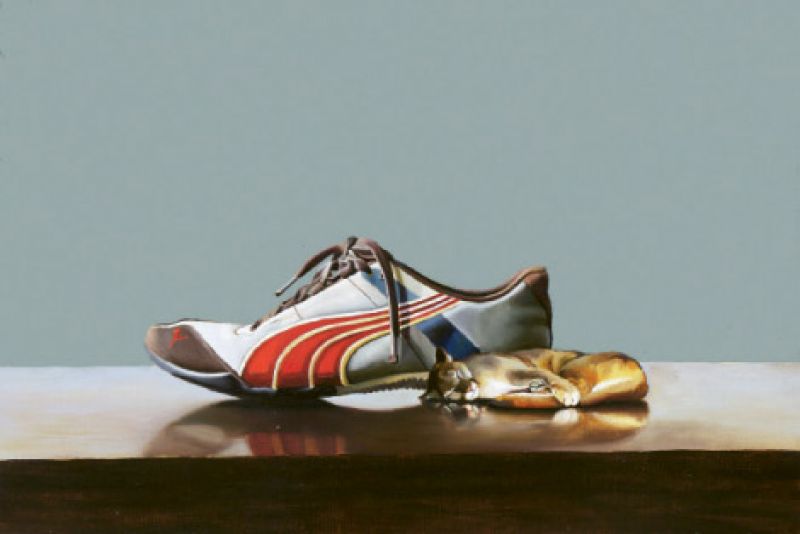 Robert Lange paints with lifelike precision. In fact, his bright and startlingly realistic oils are so perfect that a viewer might lean in to check for brushstrokes. It’s not only his three-dimensional accuracy or the ethereal use of light that signifies a Robert Lange original, though; it’s the whimsical oddities—a miniature panda painted in the palm of the artist’s hand, 25-foot-long bananas on a 36-inch-long canvas, an entire room reflected in a silver butter knife, or the nude silhouette of a woman perched behind a table setting. These images, fantastic but seemingly familiar, portray both the reality and the creative potential of heightened moments from Lange’s own life.

“The photographic clarity of his work is just stunning,” says Kay Menchel, a longtime Lange collector. “But what makes his paintings really special are the images he captures—a sunset on a horizon that baffles the eye, a moment between a brother and sister that illuminates both personalities, or details from Charleston streets that would normally go unnoticed.”

After graduating from the Rhode Island School of Design and spending a few years in the “cut-throat” galleries of Boston and New York City, Lange and his wife relocated to Charleston in 2004. “We wanted a place where we could be artists for the next 50 years,” he says. “The Charleston art scene is supportive, not competitive.”

With a vision to promote other up-and-coming artists, as well as showcase his own work, Lange opened Robert Lange Studios. From this quirky, ever-changing gallery, he continues to incorporate his affinity for math and geometry into hyper-realist paintings that, he says, reflect his own enchantment with this city. “All of my work is built from living here,” he explains. “I’m constantly finding new subjects, in the city and on the beach. I just look for things that make me smile.”

Once, Lange dropped into Southend Brewery on East Bay Street and borrowed a chrome bowl from the bar. “I took the bowl to different places and painted the landscape reflected in it,” he says. “It’s always my goal to tackle every angle as openly as possible, to reflect a kind of visual history.”

With that in mind, Lange tends to choose subjects in series, focusing on one object or motif until he has exhausted it. He often paints himself into his works, usually disproportionately small or large compared to his subjects. In doing so, he expresses how mundane objects, such as a chrome bowl or
a bunch of bananas, can indeed be larger than life.

Despite the diversity of his subjects, Lange’s goal is always to “paint optimism.” In addition to his curious subjects and plays on proportion, all of his paintings prompt viewers to look for the positive—literally. Hidden within the colors and contrasts of each of his canvases is his signature plus sign, always painted with his tiniest brush. “As a painter, you decide what effect you want to have,” notes Lange. “I believe there is providence in sharing optimism through art.”