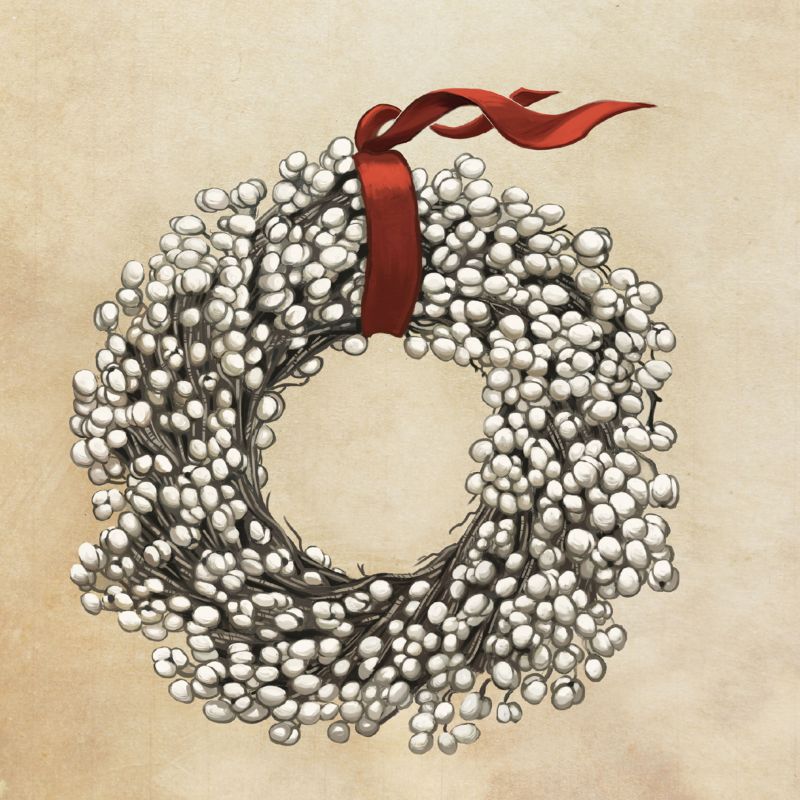 Stroll by any sweetgrass basket-selling hub (near the corner of Broad and Meeting streets, the City Market, Mount Pleasant Memorial Waterfront Park’s Sweetgrass Pavilion) around the holidays, and you’ll find these uniquely Charleston adornments that are made from the berries of the Chinese tallow tree—colloquially known as the ”popcorn tree.” Having decorated doors and windows here for generations, the wreaths may also be found ringing candles on tabletops

Full Circle While the original wreaths were small and tightly clustered, using only popcorn berries, today’s are sometimes larger and intermingled with other mediums such as woven sweetgrass and holly.

Pop Culture Popcorn-berry wreaths likely began with the Gullah flower ladies and sweetgrass basket makers who, for generations, purveyed their flowers and handiwork from the steps of the post office on the corner of Broad and Meeting streets. Patrons could also buy tree branches wrapped in bunches held together by tight cords of Spanish moss.

Practical matters The Chinese tallow’s botanical name is Sapium sebiferum, which loosely means “wax-bearing.” A waxy coating covers the seeds and, in the Far East, this vegetable tallow is used in candle- and soap-making, thus the common names of “candleberry tree” and “tallow tree.” The seed also contains a toxic oil that’s used in industrial and biodiesel applications.

Exotic Roots French botanist André Michaux, whose French Botanical Garden was located in North Charleston near the present-day airport, introduced the tree to Charleston in the 1790s. (He’s also responsible for bringing us camellias and azaleas.)

White Christmas The white berries that hang in clusters from the bare branches of the tree in winter look almost exactly like popped corn. Charleston hostesses have traditionally used branches of them in holiday floral arrangements, sometimes alone or mixed with other native plants like smilax, magnolia leaves, cassina, and holly. If kept indoors in dried arrangements, the berries will remain on a branch for years.