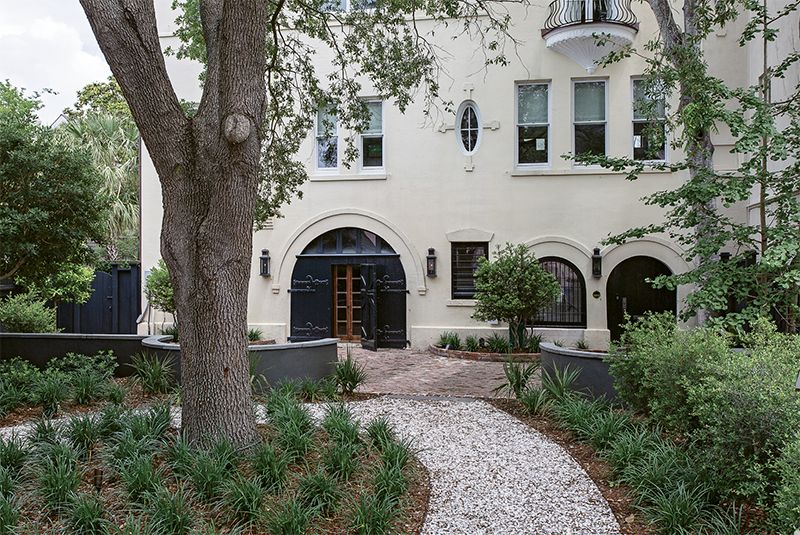 Go with the Flow: Maryland-based couple Rick and Kristy Schultz “bought a garage”—i.e. a three-story carriage house in sight of the Battery—as a second home, enlisting Richard Marks Restorations and Kristin Peake Interiors to transform the formerly drab dependency. Just as renovations were wrapping up, Tropical Storm Irma washed a foot and a half of surge into the ground floor (left), which spurred on storm adaptations. They revised the exterior hardscape with an eye toward drainage and changed up interior materials, furnishings, and electrical wiring to suit.

Kristy and Rick Schultz know about coming full-circle. The Potomac, Maryland, couple have been married nearly three decades, and, he says, it was during a trip to Beaufort, South Carolina, early in their courtship that sparks between the two ignited something long-term. Now, that little fishing village to our south might not be Charleston proper, but it’s close enough to count for Bronx-born Rick, a fast-talking, genial wealth-management whiz, who, along with his wife, bought a “swanky garage” South of Broad two falls ago and made the Holy City their second home.

For years, the Schultzes knew the move was coming. “We had visited and started reading Charleston—no kidding,” says Rick. “It was part of the catalyst to move down here; it helped us with where to stay, what to do, where to go—the things that attracted us to the lifestyle. And then there were the stories about homes. I’d see those and think, ‘Well, if I had an extra $10 million, I’d buy that house!’”

With a slightly different budget in mind, they enlisted realtor Mary Lou Wertz to scout properties for them. They focused on South of Broad for the neighborhood’s walkable nature and proximity to everything. After three bids over a year and a half, Wertz sent them the listing for a carriage house on Atlantic Street, a three-story dependency of the Porcher-Simonds House at East Battery and Atlantic streets. “We asked Mary Lou to go look at it,” says Rick. “She and her husband rode their golf cart over and took a video,” he continues. “We put a contract on it before we even saw it ourselves. And after 25 years visiting Charleston as outsiders, everything snowballed: We bought a house, did a yearlong renovation, and all of a sudden we’re owners of a swanky garage South of Broad.”

Of course, there was a little more to it. The Schultzes, who aim to spend half the year here and half in Maryland, are soon to be empty nesters. All three of their children attend Southern schools, and Rick’s clientele tends to migrate out of the DC area—in fact, he has more than a dozen Capital City clients who own Lowcountry homes. So as the puzzle pieces came together for their work-life balance, they assembled a trifecta of talents: Wertz; Richard “Moby” Marks of Richard Marks Restorations; and Kristin Peake of Kristin Peake Interiors, with whom the couple had worked on the nearly four-year renovation of their Potomac home.

They needed the visionaries, they say. “We put in the bid, won the bid, flew down, looked at it, and were like, “Ugh…,’” recalls Rick. Why the groan? Built in 1856, the structure was originally a carriage and horse stable with slave quarters above. Sometime between 1929 and 1944, the third floor was added, along with tacked-on bathrooms. While arched doors and windows abounded, it was essentially a 3,000-square-foot utilitarian add-on to the main house. Light and airy it wasn’t. And as a historical property, myriad elements (as in, everything on the exterior) were untouchable as far as renovations were concerned. But location, location, location won out.

Existing sheetrock came down to expose brick that is actually more true to the site’s original look; bathrooms got facelifts; fireplace surrounds were refreshed with mosaic-like tiles; old doors were salvaged; and everything from the heating and electric to the roof were upgraded. “So as is typical—with an estimated but firm $250,000 budget—approximately $700,000 later, it was exactly what we wanted,” laughs Rick. For her part, Peake was efficiency personified. “After a site meeting and walk-through,” she says, “I took a few pages of notes, went back to our office, designed, presented, and ordered everything within a week.” The Annapolis, Maryland, native explains that working with historical homes is second nature to her, and she embraces the inherent quirks. “Having the arched carriage entrance and original pavers that show they actually parked the carriages there is pretty amazing,” Peake says. “The other archways—in the bar and the bathroom—bring the history behind the space to life.”

“I like the house’s history,” adds Kristy. “We didn’t change the floors—we didn’t strip them or anything—so we are walking where all these people before us have walked, which is really cool.”

Peake started with the same “comfortable, cozy, sophisticated look” she brought to their Potomac house. “The Schultzes wanted a similar feeling, but in Charleston they were willing to be more daring,” she explains, “painting the kitchen island navy, adding fun tiles, and doing other things that just didn’t work in their Maryland home.” Peake also sought to infuse the house with as much sunlight as possible. “The Schultzes wanted to maintain any natural light flooding into the rooms,” says Peake. “So I chose natural woven shades rather than window treatments most everywhere.” Last, she grounded the palette in navy, neutrals, and white, she notes, to impart a classic, timeless style—one that makes sense in a dwelling mere steps from Charleston Harbor.

Just as the home was on the verge of being move-in ready, Tropical Storm Irma moved in with the worst tidal surge seen in the Lowcountry since 1989’s devastating Hurricane Hugo. “We were almost done when we saw a news report from our home in Maryland warning about the storm,” says Rick. About six hours later, the couple caught another video of people standing hip-deep and holding onto the East Battery street sign. “We knew there was no way not to have water in there.” Sure enough, a little over a foot and a half of storm surge stood on the ground floor of their nearly completed home.

Irma spurred on phase two of their renovations: storm adaptations. Among the changes: re-landscaping so water flows away rather than collects, installing a pump on the side of the house, screwing on water-resistant HardiePlank baseboards, and filling the lower level with marine-grade stainless steel-legged furniture upholstered in all-weather fabrics. Today, the Schultzes have a crew to sandbag the entries, board windows, and move intentionally light furnishings to higher ground if they aren’t in town when trouble calls. “And that’s inevitable,” admits Rick. “But the house has been there for a 100-plus years and it’s going to be there for another 100-plus.”

And that brings us full circle to the Schultzes’ willingness to invite Charleston readers into their “humble” abode. “We hope we’re returning the favor,” Rick says. Adds Kristy, “We just want people to see how the house turned out and to be able to enjoy it like we do.” 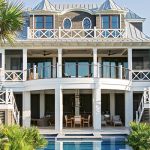 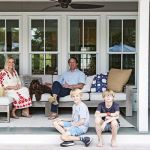