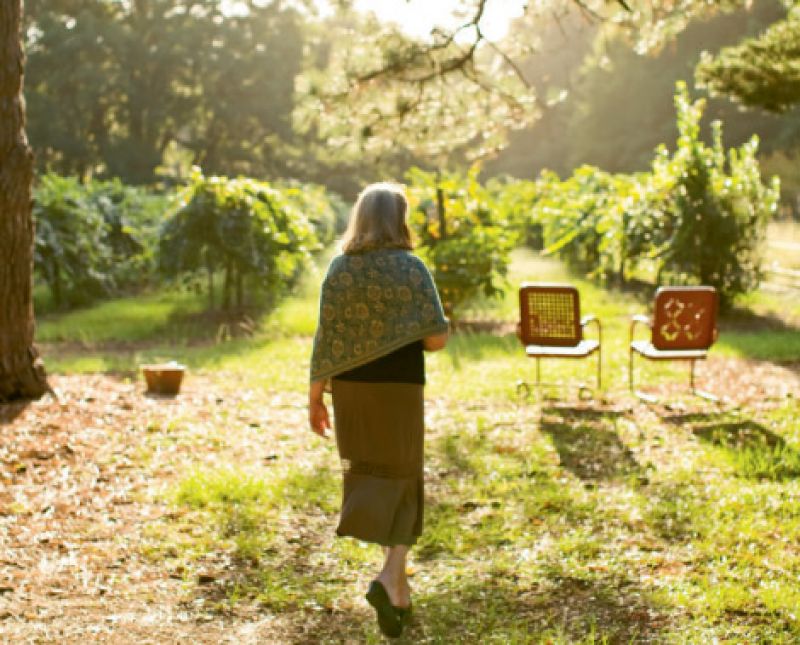 I’m wild about the “Grape of the South,” the muscadine, for all its loveliness—the nearly heart-shaped leaf with a toothy edge, the green tendrils and plump greenish-bronze or purple fruit—and for all its tasty uses, from sweet wine to grape-hull pie and muscadine ice cream. Muscadines and their cousin scuppernongs are native to the Southeast but especially honored in the Carolina coastal zones, where they were first discovered and propagated by colonists. And it’s not just the beauty and taste I’m crazy about. In my mind, muscadines are entwined with the mysteries of memory, language, and love.

When I was 12, my father planted a muscadine vineyard and named it for my pretty mother—“Martha’s Vineyard”—and every weekend he tended the vines, pruning, fertilizing, watering, coaxing, hoping for a bumper crop because he wanted to make wine. For advice, he corresponded with Leicester Hemingway, brother of Ernest, who had published a little pamphlet about how to make wine at home. Dad first tried Leicester’s recipe for wine from oranges because it was the quickest to produce an alcoholic beverage, but he telephoned him to complain that the wine was undrinkable. “You’re not meant to drink it,” Leicester said. “You’re meant to distill it. I couldn’t say that in print. If you want a drinkable wine, try muscadines.” So Dad ordered the vines and planted them in long trellised rows. We would have to wait two years for them to bear fruit.

By then, I’d fallen in love with a boy who had tattooed his name, “Sonny,” onto his forearm with a razor and a ballpoint pen. He was 16 and entirely unaware of me. Looking back, I can’t believe how lovesick I was, how possessed by something clearly wrong-headed and probably dangerous. Full of longing, I roamed the vineyard while my father worked the rows. The ground was sandy and dusty-smelling, and snakes hid in the tangled vines. Crows cawed. One red-headed woodpecker flew off with a whole grape in his beak. I sat under the shade of the arbor, thinking about Sonny’s arm and my dad’s great hopes. I wanted all things to thrive forever. I especially wanted the vines to flourish.

And they did. The female vines were pollinated by the males and the hermaphrodites. Gradually new cultivars were added, their names oddly nondescriptive and therefore fascinating to me, as curious as poem titles. Noble, Memory, Hope, Redgate, Darlene. Dad made wine every year, using Leicester’s recipe.

More than 50 years later, my husband, Tom, tends Martha’s Vineyard and makes the wine. In October, the juice ferments in big glass carboys in our kitchen, ranging in color from pale gold and amber to pink and a deep dark red depending on the cultivar, all making music as bubbles rise through air-lock tubes in the corks with a soft, slow bloop, bloop.

Tom says muscadines are the sodium pentothal of the South. When guests come to pick grapes, it’s not long before they’re blurting stories. They can’t help it. Some are pretty straightforward: “My great-uncle used to grow muscadines….” Others might begin on a nostalgic note, “I had a girlfriend once,” and go on to recall certain events in the grape arbor. Some are confessions, “When we were little, my brother and I got into Daddy’s scuppernong wine one afternoon,” or revelations, “Aunt Ruthie always had her little jug of muscadine hidden in the cupboard.” Maybe the heady smell of muscadines is a memory trigger, I’m not sure. But in the vineyard, lost times come back as stories.

My widowed dad is 95 now and has Alzheimer’s. Most days, he doesn’t speak much, and his memory of my mother is fading. But when we walk in the vineyard, he becomes talkative, especially in early autumn when we’re picking ripe grapes, and that sweet grapiness is thick in the air. He talks about Martha and Leicester and old friends long gone. I have no idea what happened to Sonny, but in the vineyard he sometimes slips into my mind. The tattoo was ominously purple against the pale skin of his inner arm. I’m sure he came to no good; I’m lucky he never noticed me. Still, I welcome the flashback when it comes.

Not everyone likes muscadines. The more sophisticated and North of Lowcountry you are, the less likely you are to appreciate either the grape, seedier and more tough-skinned than “real” grapes, or the wine, sweeter and humbler than “real” wine. One wine-expert friend of mine pronounces the muscadine “god-awful.” Okay, sometimes we do get a god-awful bottle, but most of it is like a good dessert wine, and occasionally there’s the miraculous surprise when a cork pops and we find that a whole batch has unexpectedly gone sparkling, yielding a fantastic muscadine champagne. That lucky accident has happened for us only twice in 50 years; we drank the gift with solemnity but are still hanging on to one unopened bottle.

Unlike most people, when I eat muscadines I don’t spit out the seeds or the hulls. I like the pop of the splitting skin against my teeth and the burst of grape on my tongue. The strongest flavor is in the hull, but the seeds are bitter, so I’ve learned to chew without hitting a seed, and I swallow the whole grape. My father used to tell me this would cause a grapevine to grow inside me. Well, I was never afraid of that. It sounded good to me. Still does.