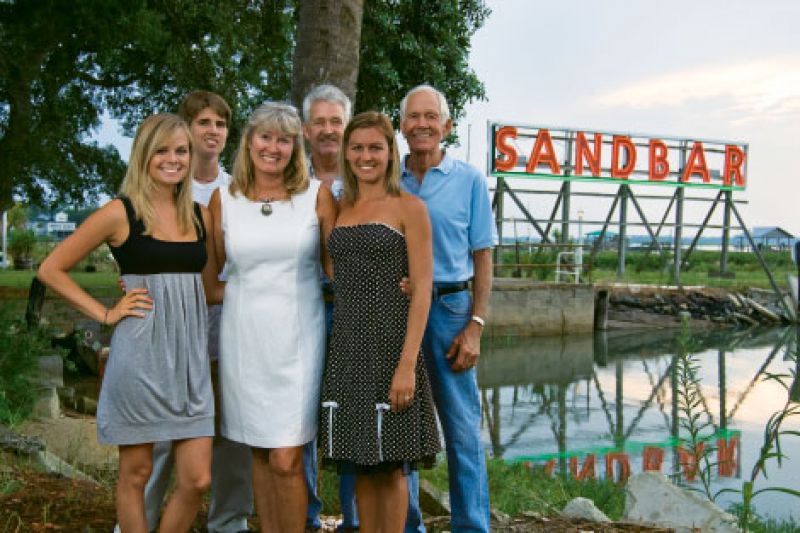 For Darus Weathers, age 79, this summer has been one long family reunion, with children, grandchildren, and longtime friends gathering at one of his most treasured places: the Sandbar restaurant on Folly Beach.

In April, Darus reopened the riverside spot, marking another milestone in a history stretching back to 1958, when the Sandbar was established by Michael McCarthy. In 1969, Darus and his wife, Muriel, bought the restaurant, and it was a hit, serving up seafood and steaks along with gorgeous views and unforgettable sunsets. “To have 100 people waiting outside was nothing,” he says. “We hosted wedding receptions, church dinners, you name it. Those were wonderful days for us.”

But in 1974, Muriel lost her battle against cancer. Daughter Andrea left for college three weeks later. With his 12-year-old son, Darrell, to care for, Darus leased the Sandbar to former employees until Andrea graduated. Then, she and Darrell ran the place with their father’s help until 1991, when family responsibilities again led them to rent it out—this time to the River Café.

Finally, in 2006, Darus decided to take the helm himself. “I wanted to relive the good times,” he explains. He and Darrell spent more than two years renovating the space “until it looked the way it used to.” The décor is basic, with wooden floors, walls, and booths allowing the view—showcased through a wall of windows—to take center stage.

Dinner begins with a basket of Sandbar bread, baked by Marcia Smith, who first picked up the gig back in 1958. Another longtime employee, Tally Rhodes, joins Darrell in preparing the menu of seafood, salads, and steaks. A nice wine and dessert selection make for an experience that isn’t fancy but is definitely satisfying.

Three of Darus’ grandchildren work as servers while he oversees the kitchen, and Andrea often keeps an eye on the front of the house. With the warm family feel as palatable as ever, a trip to the Sandbar is like stepping back in time for many customers. “People sit in the same booths they did as children. Couples admire the view they enjoyed on their first dates,” says Darus. “It’s really special.”