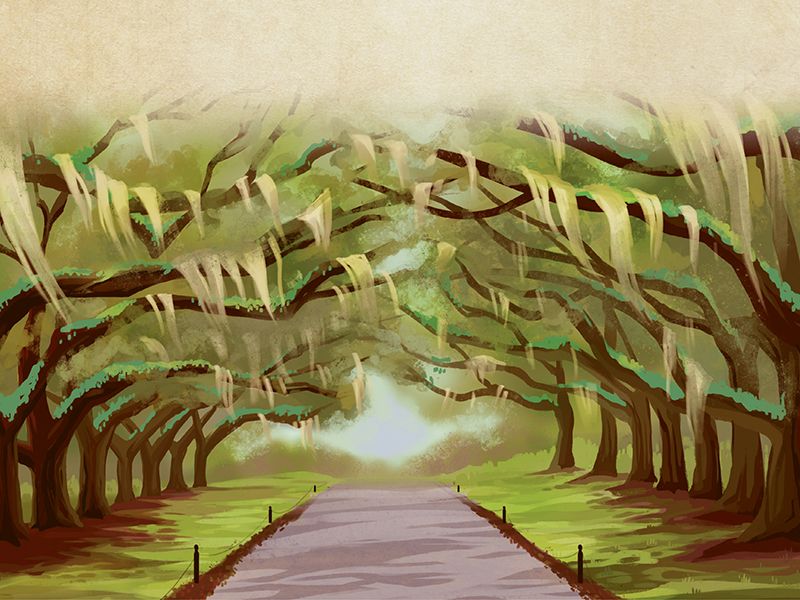 Nothing says “Lowcountry” better than a Spanish moss-draped avenue of live oaks. Early colonists adopted the use of formal tree-lined allées as decorative landscape features from England and Europe when Charleston was first settled. Designed to enhance the entrance drives to their country estates, they had one special difference—the Lowcountry’s abundance of Southern live oaks (Quercus virginiana). Their beautiful shade canopy created a natural avenue unlike any in the world

Strong as Oak Southern live oaks are fast-growing trees and reach close to their maximum trunk diameter in 70 years. While they can live for centuries, their growth rate slows as they age. Impervious to rot and salt spray, they also have a deep tap-root which creates an extensive root system anchoring them firmly in the ground, making them resistant to the strong winds of hurricanes.

Ancient History While most of the oak avenues in the Lowcountry date to the late 18th and early 19th century, some go back 300 years, such as the avenue planted in 1680 by Edward Middleton at The Oaks Plantation in Goose Creek, formerly The Oaks Golf and Country Club.

Artful Alleys The Old French term allée, meaning walk or passage, eventually came to be known as the promenade of a formal garden that affords an extension of the view. The English word “alley” is also derived from this early French word.

Picture Perfect Perhaps the most photographed avenue of oaks is at Boone Hall Plantation in Mount Pleasant. Planted in 1743 by Major Thomas Boone and almost one mile long, the avenue’s 80 live oak trees were the inspiration for the avenue at Twelve Oaks in Gone With the Wind. They’ve also had starring roles in the movies North and South, Queen, Scarlett, and The Notebook.

Stroll-worthy Charleston has numerous avenues to be admired, most notably at James Island’s McLeod Plantation, Old Town Plantation at Charles Town Landing, the oak drive leading into Magnolia Gardens, and Boone Hall Plantation. One of the newest avenues is on Riverland Drive on James Island, planted in the early 1900s when Riverland Terrace was first developed.

Early Air Conditioning The tree’s crown is very dense, creating much-needed shade in the Lowcountry’s semitropical climate and cooling man and animal alike. So valued were shade trees to early colonists that anyone who harmed or cut a tree down unnecessarily was brought to court and fined a hefty fee.