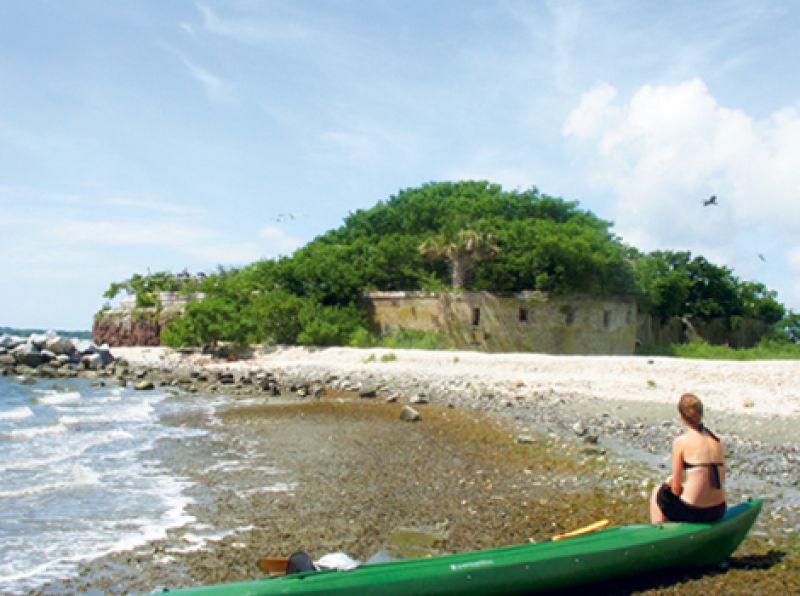 I love fairy tales. And Charleston’s candy-colored buildings, gas-lamp-lit alleys, cobblestone streets, and horse-and-carriage brigades weren’t lost on me when I decided to make the Holy City my happily-ever-after home. I’ve even become enthralled with our own castle. With my morning rowing group, I get to watch the sun kiss Pinckney’s oyster shell and marsh island awake several days a week. But I’d never gotten to actually explore this storied spot on Shutes Folly—at least until last Saturday, when colleague Lauren Johnson and I decided it was adventure time.

She’s got a tandem kayak and a steady way about her that make her the perfect partner for derring-do. Before departing, I sought counsel from my oracle-like rowing captains. One was enthusiastic, but cautioned
of weekend boaters. Another warned of currents, winds, and ships. The last spoke of a daunting journey and, should we shipwreck on the island, a plague of snakes and storm of birds. “But it’s always nice to have the spice of possible danger,” he added.

Figuring it’d take one to two hours to get there, we set out from Shem Creek at 9 a.m. All was charming (dolphins, pelicans, and sunny skies aplenty) til we reached choppy channel waters that sloshed over the bow. That’s when we encountered a sea beast of a container ship swiftly drawing near. I swear we broke all records hauling our gnat of a craft out of its path to the north end of the island in 45 minutes flat.

Not seeing any signs preventing us from stepping ashore (we later found one fallen amidst the rocks), we hopped out. As soon as we did, though, we were swarmed and dive-bombed by orange-beaked skimmers defending their nests from marauders like us. Point taken, we scuttled to the kayak, dragged it into the water, and paddled to the south end to take in the castle from a safe distance.

Everything I’d dreamed of, it looked as though it were straight out of Narnia, the Cair Paravel hundreds of years after its heyday. Brown pelicans hovered in a cloud above, while more hunkered down in scrappy driftwood nests built atop wax myrtles that have taken over the castle, its brick sides whitewashed with bird poop. Considering its current dilapidated, avian-haunted state, it’s amazing to think it was once a federal fort—the first captured by Confederates in the Civil War—then a prison for Union soldiers, then a lighthouse station, and later, a residence, until it fell into disrepair in the mid-1900s. That the State Ports Authority prohibited us from exploring inside the crumbling fort merely kept its mystery alive—like the best sort of fairy tale.