Living History
February 2012
WRITER:
Melissa Bigner
Looking back into Charleston's haunting past at the Aiken-Rhett House 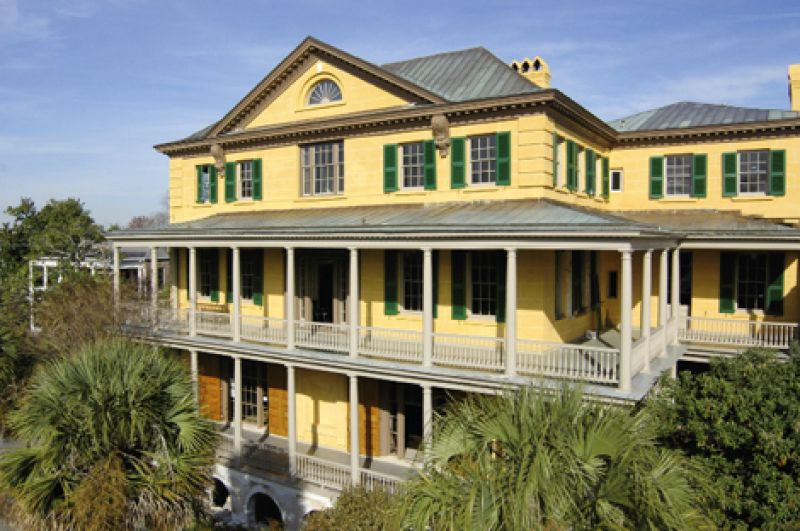 I am a big-time home and décor buff (especially when it comes to the shabby chic genre), and it’s an immense part of why I love Charleston. It’s impossible not to get hooked into the historical aspects of design here, and the human stories behind it all. So you can imagine how fired up I was to tour the Aiken-Rhett House, built in 1820 at the corner of Elizabeth and Judith just off Meeting Street.

Since 1995, the residence has been owned by Historic Charleston Foundation (HCF), which says its mansion and outbuildings are downtown’s most intact examples from the antebellum period. In 1827, after its original owner lost five ships at sea, the house fell into the hands of the Aiken family. Their patriarch, William Sr., was president of the South Carolina Canal and Railroad Company and ran a rice plantation outside town with hundreds of slaves; his son, William Jr., served as the state’s governor from 1844 to 1846. Only descendants of these two men lived in the home for 150 years (until they donated it to The Charleston Museum in 1975).

Twenty years later, HCF opted to preserve the Aiken-Rhett House rather than restore it, meaning that the viewer walks into a time capsule complete with 1800s wallpaper and upholstered pieces, bare brick patches, and exposed lathe ceilings, all oddly (but fabulously) punctuated with fine paintings, sculptures, and etchings. Instead of being guided by docents, visitors listen to an audio tour with period music, antebellum sound effects, and quotes from the era delivered in lilting accents that make the place come alive. The contrast is bizarre: you feel you’re at a candlelit ball one minute, then get the impression that if you lean on anything, it might crumble.

Even the most engaging and honest tour, however, can’t tamp down the inhumanity housed here. In the back of the main structure sits a kitchen house and laundry as well as a stable and carriage house, each with slave quarters above. I could easily make my home in the stable, with its arched doors, brick floor, and stunning interior columns. The stalls with their timber frames beguile as potential nooks, and the hayloft hints at a supreme sleeping area.

Yet the enslaved families’ quarters, with their bare bones architecture and dark rooms, gave me the chills. I’ve long heard that this compound—specifically its back buildings—was haunted, but I don’t know if it’s by anything more than conscience. To see how the horses were kept compared to the slaves is tough to stomach. The proximity of the structures to one another and all of it residing downtown rather than in some far-off plantation felt striking and immediate. Standing in the midst, I was utterly thankful that the family granted the property to the public, that HCF chose to preserve the place, and that Charleston forces us time and again to reexamine our own humanity.