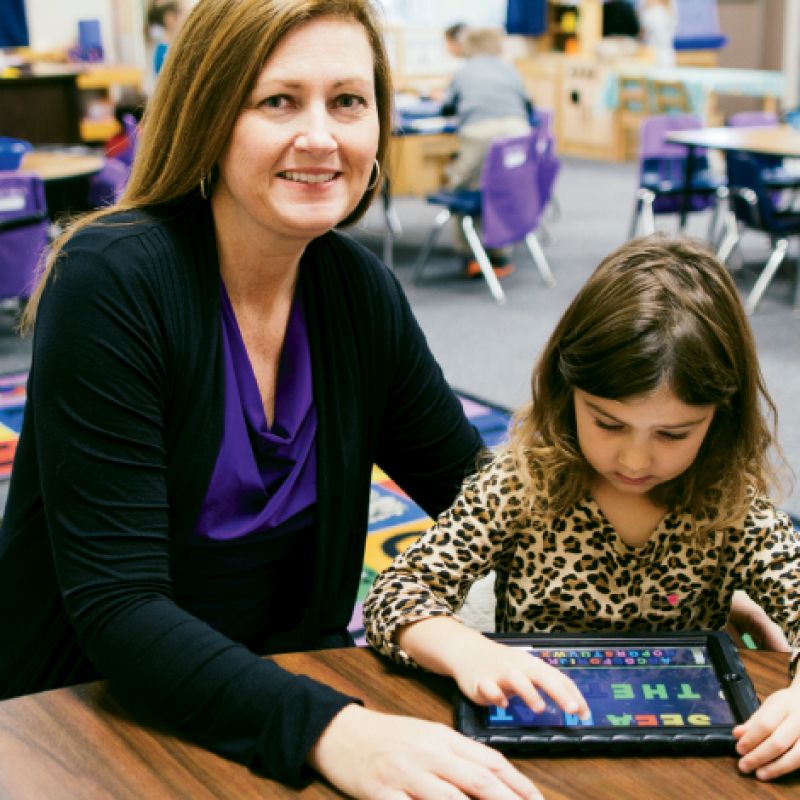 Long gone are the days when kindergarten was an easy-going day filled with finger-painting, silly songs, listening to a teacher read The Cat in the Hat, and, of course, a group nap (remember your nap mat?). Today’s heavy emphasis on first-grade readiness means high pressure for kindergarten teachers and high curriculum demands for literacy and math skills—not a snooze. But that isn’t an issue in Kristi Meeuwse’s classroom, where a nap is the last thing on kids’ minds.

As the state’s first and only Apple Distinguished Educator, Meeuwse is pioneering 1:1 learning with the iPad for the Charleston County School District in her Drayton Hall Elementary kindergarten class. For Meeuwse, one-to-one learning means students use the iPad to actively choose how they learn—a radical transformation of the traditional “stand-and-deliver” teaching methodology. But it also means learning as she goes for Meeuwse, now in her 24th year of teaching. “In 2011, the district used classroom modernization funds to pilot it at Drayton Hall. I was given 31 iPads for my 31 students, but very little instruction on how to use them in the classroom—it was freeing but also scary.”

Meeuwse read everything she could find on the subject (which was slim; “there wasn’t much out there,” she notes). So she developed her own methodologies, which she shares with global followers of her blog, iTeachWithiPads, and at education conferences as an Apple Ambassador. “I’ve always been an early adopter,” says Meeuwse, adding the disclaimer that when she was in school, new technology meant an electric typewriter. “I’ve found that you have to be more than an enthusiastic user, you have to be an innovator. You have to understand the way kids learn, then take the new technology and put the two together. We aren’t at the cutting edge, we’re at the bleeding edge,” she says.

In doing so, she has found that the iPad is much more than a device for consuming information; it allows her to create her own teaching tools, such as the books she writes customized to students’ reading needs. “I’m able to immerse them in literacy at their individual emergent levels,” she says. Content creation works both ways in Meeuwse’s class. No boring worksheets here. Instead, after a math lesson, Meeuwse challenges students to create something to “show me you know how to do subtraction,” she explains. “They come up with things I would never dream of!” One child created an eight-page subtraction book, complete with stickers and word problems. “By giving students the freedom to make a choice, they buy into it; they become engaged, and that’s when learning happens,” she adds. After her first year using 1:1 learning with iPads, 100 percent of Meeuwse’s students entered first grade above reading level—a first after more than two decades of teaching.

Personalized learning and more interactive choice in the classroom is the wave of the future, agree Meeuwse and CCSD leadership, and collaborative learning and global citizenship will become more and more important. Meeuwse’s class uses a Twitter account (each day one lucky supervised kid gets to be “Chief Twitter Officer”) to follow what other students are doing and learning around the world. “It opens up our classroom walls,” she says. “Technology is shifting our whole approach to education,” says CCSD superintendent Dr. Nancy McGinley, who foresees that compulsory public education and mandatory “seat time” from kindergarten to grade 12 may be replaced by individualized learning contracts by 2040.

“Meeuwse is a superstar in the teaching world,” says McGinley, who was blown away when she observed how engaged students were in her classroom. But even so, McGinley is quick to point out that iPads are not what makes Meeuwse exceptional. “You can take all the technology out there, put it in the classroom, and still not have transformational learning,” she says. “It takes teachers like Kristi who understand how to balance technology with the critical human elements that I believe will always be central to good teaching and learning—giving children encouragement, acknowledgement, inspiration. It’s incredible what children will be motivated to do for teachers they trust.”