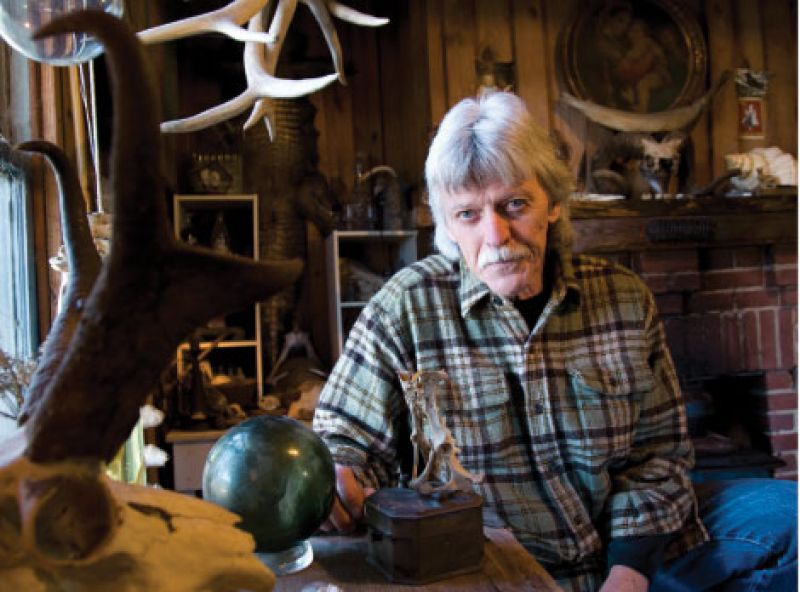 Nine miles into the piney woods, through a cathedral of live oaks blessed with Resurrection ferns, lies a dirt road marked by a 21-mph sign. Here, on the Ashepoo River deep in the ACE Basin, stands Airy Hall Plantation. For 20 years, artist-in-residence Kendrick Mayes has lived on-site in a white, circa-1920s, clapboard house. Step inside, and you become immersed in his world of found and created objects, carefully arranged into shrines.

In the living room are a fiddle, a mandolin, and a pull-down classroom map of Africa; fossils, masks, a stuffed otter, and elk horns; Chinese shoes and vintage, red enamel Soviet star pins; an alligator hide; the artist’s print of Albert Einstein; a noose; mounted butterflies; a Buddhist mala; and a Victorian tea caddy. His drawing studio is papered in photographs, and there are stretched rattlesnake skins in the bedroom. “It’s an overwhelming amount of stuff,” he admits, joking that his fine arts training may be all that separates him from “that nut case with a yard full of whirligigs by the side of the road.”

A Georgia native who graduated from Florida State University with a degree in painting and printmaking, Mayes was most inspired by the old masters of light and shadow and by American realists Edward Hopper and Thomas Eakins. In college and for a decade beyond, he also made stone lithographs, an almost-lost art that was “the most common printing process up to about 1900,” he says. Now, he draws portraits and turns out the occasional small oil landscape, though lately he’s been working in photography and bones.

In researching the projects, he found scant anatomical information but discovered drawings in paleontology texts from the 1880s to 1920s. He also studied the giant crocodilian skeleton in The Charleston Museum. “It’s 18 feet long, and it’s almost identical to the modern creature,” says Mayes. His “Leonardo moment” came with his first alligator dissection. “I think everybody is fascinated by something that primal,” he says. Mayes has five sets of clean alligator bones bagged, labeled, and waiting to be assembled. (All were taken in legal hunts at the plantation by a licensed trapper.) For one almost 12-footer, he plans to add inlay, gold leaf, or stain to the articulated skeleton.

Above the bones, Mayes’ walls hold his photo gallery. He shoots portraits, elements of farm life, landscape light and color, and two sports that take place regularly at Airy Hall—fox hunting and polo. He shoots digital now but still has a “not so darkroom” filled with prints of old friends.

Once a fixture on the King Street art and music scene of the 1970s, Mayes now works in “splendid isolation,” smack dab in the middle of remote and hidden riverine beauty. “I’m always chasing the light,” he says. “Light paints everything. It forms everything.”