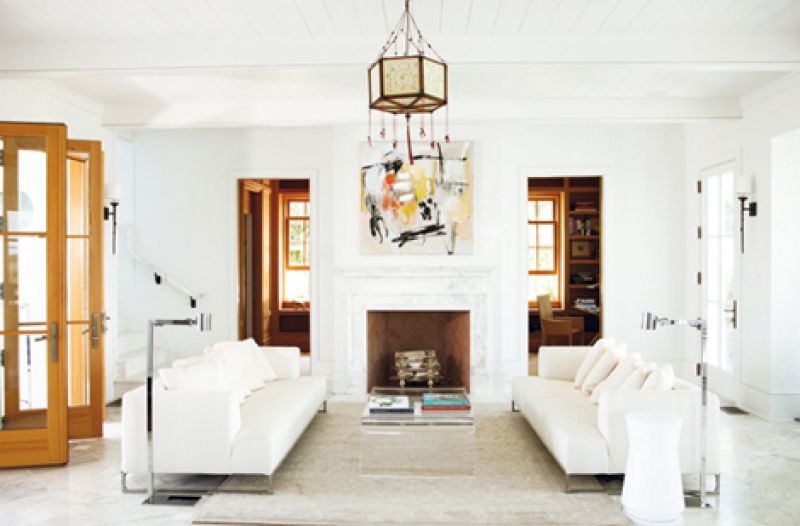 “Sandy Lane is one of my favorite places in the world,” raves Tommy Baker of the venerable Caribbean resort on Barbados’ western shores. Breezy stucco terraces, grand pillars, and artfully framed water views rule in true British Colonial style and are all part of the inspiration behind the tropical Sullivan’s Island home Baker shares with his wife, Vickie.

“We wanted the design to be authentic to this style, while still reflecting the architecture of Sullivan’s Island,” says Beau Clowney of Beau Clowney Design, whom the Bakers commissioned for the design of the residence.

This wasn’t much of a stretch, given Charleston’s kinship with the Caribbean goes back to its 18th-century heyday of seafaring and sugarcane, which brought to our shores all manner of longstanding customs. Among them were crops, foodways, dialects, and settlers (including several of our state’s first governors), but the most influential of these imports is widely believed to be the style of architecture.

“Many of the traditions and detailing found in the historic vernacular architecture of Sullivan’s Island and Charleston can be traced to the Caribbean, and in particular the island of Barbados,” offers Clowney, whose own travels in the Caribbean, going back more than two decades, informed the design. “Historically, these details had everything to do with climate.  The use of shutters, porches, center halls—it was all about ventilation. Nowadays, this is less of an issue, but good design retains the same simple, formal plans because they work.”

Armed with ideas from Sandy Lane and beloved buildings in St. Bart’s and the Bahamas, Clowney and the Bakers went to work mixing traditional British Colonial elements with the more successful characteristics of what we’ve come to know as “Lowcountry” architecture (think hipped rooflines, railing details, and exposed rafters).

The Bakers’ marsh-to-sea slice of real estate is a stone’s throw from Breach Inlet, so for Clowney, the first order of business was to site the home and its footprint to quite literally frame the water views in two directions—verdant marsh to the west and the green-gray expanse of Breach Inlet to the east. The result is a grand main house with divergent vistas, first in the great room with floor-to-ceiling entry and rear windows, and upstairs, in a master suite that squares a marshy landscape in the bedroom with an Atlantic-facing, open-air terrace.

Lending the residence its L-shaped footprint is a guest house linked to the main residence by an enclosed dogtrot. “The design recalls the idea of a classic Caribbean great house with guest quarters in adjacent buildings,” explains Clowney.

Equally important to the design was the use of traditional, natural materials, such as true limewash stucco, cedar siding, mahogany shutters, slate and copper standing-seam roofing, remilled antique oak flooring, and more.

As for how the Bakers’ favorite Barbadian haunts informed their interiors, they sought a figurative tabula rasa. “Both Vickie and Tommy wanted this to be a place of
escape, a true getaway,” says interior designer Carolyn Griffith of Carolyn S. Griffith, LLC, Interior Design, who’s been at the helm of a number of projects for the pair. “They wanted a place where they could entertain and relax but that could be a true departure from their everyday life in town.”

The driving force behind the décor? “The marble,” Griffith says. “There’s a lot of motion in marble, so you have to keep the furnishings clean, uncluttered.” The result is an unexpected composition of spare, contemporary spaces, starting with chalk-white, Venetian plaster walls in the living room, kitchen, and master bedroom. Vibrant abstract art by Sally King Benedict, low Italian furnishings—like a pair of B & B Italia sofas and a simple acrylic coffee table—and industrial accents such as the kitchen’s sleek white cabinetry and pewter island reinforce a modern vibe.

Beyond the central living spaces, however, decadent white marble gives way to floor-to-ceiling shiplap, Caribbean-hued artwork, and citrusy textiles. The bedrooms each follow a clean, serene formula: crisp white linens, natural woods, and a subtle shot of color in the form of blue, yellow, lavender, or coral.

And it helps that nearly every room opens to the outdoors, flooding interior spaces with natural light and color. “We designed the landscape from the inside out, based on what the Bakers would see through the windows,” says landscape architect Robert Chesnut. He used palmettoes and ligustrum to frame the property and provide privacy, adding color through Nellie Stevens holly, yellow Swift Creek privet, blue plumbago, white oak leaf hydrangeas, Knock Out roses, and other repeat bloomers.  The idea was to layer the vegetation, giving the gardens a thickly planted appearance.

“Tommy wanted the garden to look as if it had been there for a while,” adds Chesnut.

“We built this house to reflect a sense of permanence,” Baker affirms, adding that his family had lived in a previous home on the property for more than two decades. “Before we built this house, I considered selling the land. But this is where my children were raised; it’s part of their heritage. I knew I needed to build something that would last for generations.”

Clowney agrees. “Like the sturdy plantation houses that came before it, this house is meant to age gracefully.”