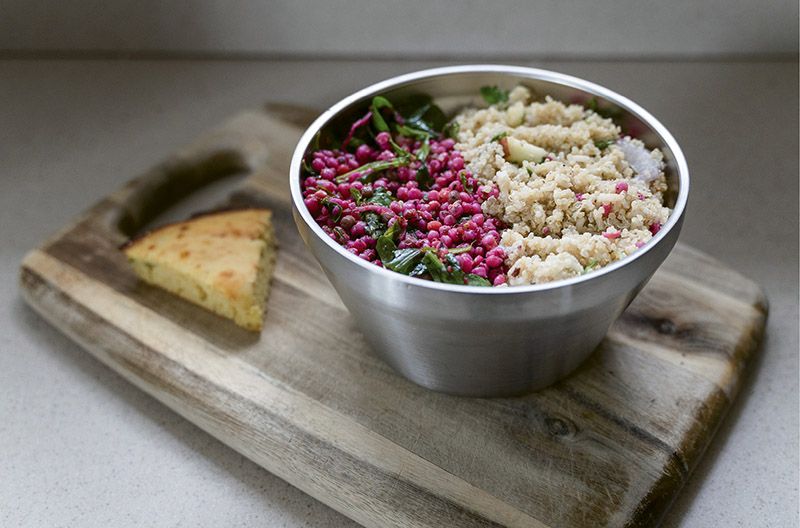 The RIGWA 1.5 quart bowl is large enough to use as a serving dish at a party and small enough to carry lunch to the office.

The queso had gone cold again. For the third time in one taco night, Mount Pleasant realtor Jericha Jordan found herself heading back to the kitchen to nuke cheese dip for her four children. Fed up, she asked her husband, Zac, who works for a private recruiting company, “Why don’t they make a vacuum-insulated bowl for food?”

The couple quickly began researching and developing their own Tupperware alternative, a stainless steel, air-tight, spill-proof, BPA-free lidded bowl that keeps items hot up to four hours and cold for up to eight. “We wanted something versatile enough for the house and the outdoors as well as something for solo use or to share with others,” Zac says. “So we decided to go for it.”

Prototype testing for the RIGWA Bowl—named for the Jordans’ middle initials—was a family endeavor. “We dropped it off a surfboard, and it didn’t let any water inside,” Zac says. “The kids stood on them, in them, and dropped them countless times. They’re kid-approved.”

Soon, Zac says he and his wife realized the versatile 1.5 quart bowls were not only functional but also helped reduce the family’s need for single-use plastic products. “The impact on plastic waste will continue to be a large part of our mission,” he promises.

The Jordans are funding the initial production of 5,000 containers via an IndieGoGo campaign. For $48 retail, your bowl will arrive just in time to enjoy on fall camping trips and at holiday parties.

Feed the Children
RIGWA LIFE has partnered with Feed the Children so every RIGWA bowl sold through December 31, 2019, will supplement six meals for children and families in need.

Shop Local
RIGWA Bowls soon can be found at The Coastal Cupboard in Mount Pleasant and Half-Moon Outfitters.

Measuring Up
The company plans to eventually offer the bowls in a pint size as well as other colors.