Hoppin’ John
January 2015
WRITER:
Suzannah Smith Miles
It may be a simple dish of rice and peas, but no right-minded Charleston resident goes through January 1st without a plate of hoppin’ John on the table, as it’s said to bring good luck. Usually accompanied by collard greens (believed to bring financial prosperity) and corn bread, this traditional Gullah dish is thought to have achieved initial popularity in South Carolina, but now, serving it on New Year’s Day is customary throughout much of the region 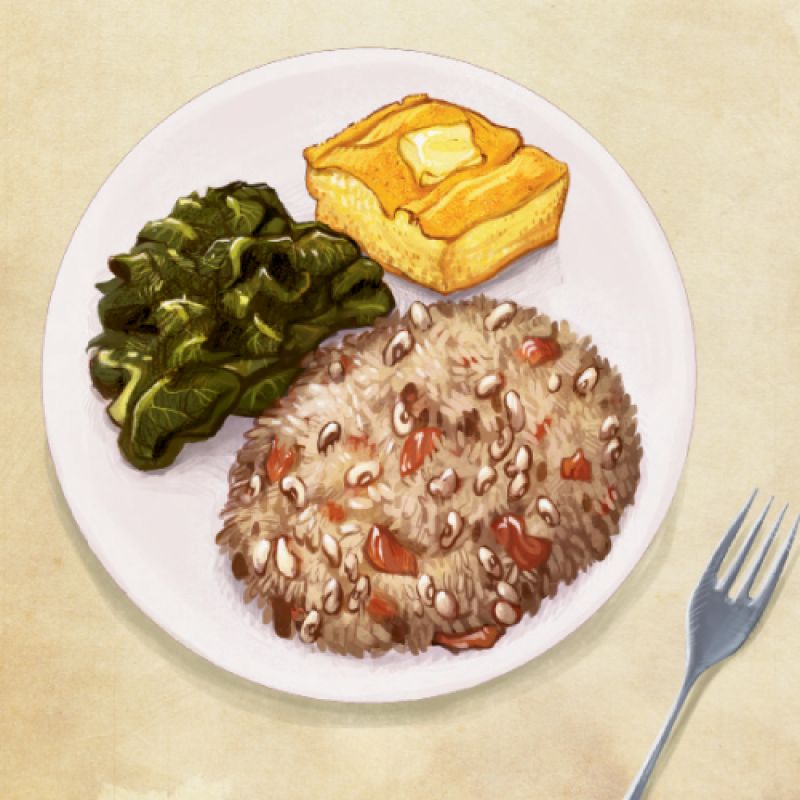 Hot Pursuit
It‘s common to add a touch of red pepper or hot sauce. A 1912 News & Courier article described the way old-time cooks made hoppin’ John: “Give her some peas, some rice, a bit of fat bacon, and two or three pods of red pepper, and she would turn you out a dish of Hoppin’ John, with each grain of rice separate from the other and the rice from the peas.”

What’s Hoppin’, John?
While various theories exist about the origins of the name ”hoppin’ John,” a plausible explanation is that it comes from a paraphrased Gullah version of the French words for pigeon peas, pois pigeons, pronounced “pwa-peejohn.”

Take Your Pick
Black-eyed peas are traditionally used in Charleston hoppin’ John, yet field peas, crowder peas, and even kidney beans may be employed.

Winning Combo
The peas are accompanied by long-grain white rice. Some people serve the rice and peas separately; others cook the two together.

Meat of the Matter
While the oldest Lowcountry recipes call for adding fried bacon to the mixture, today other pork meats such as ham hocks, salt pork, or pork jowls are also used. In Africa, where the dish originated, beef would have been the meat of choice.

Lucky Charms
Some folks put a shiny new dime in the pot while cooking. Whoever finds the coin in his bowl will get an extra dose of good fortune. Another tradition calls for each person to leave three peas on the plate after finishing, with one each to represent luck, wealth, and romance.