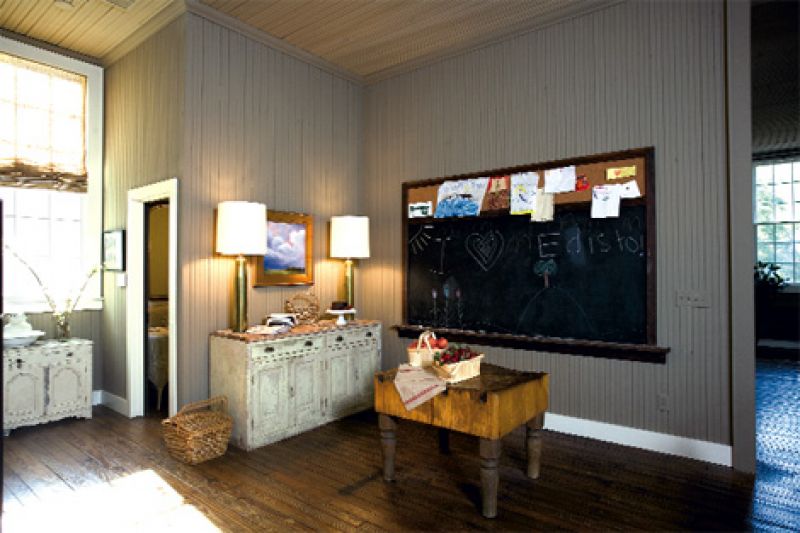 As a child, Gale Thompson spent long summers on Edisto Island. Her family’s circa-1880 plantation house, better kno­wn as “Sunnyside,” served as the clan’s quiet country retreat for as long as she can remember. So it’s no wonder that when she and her husband Bill decided it was time to build their own haven on their property at Edisto, they set out to find something historic to remake into a home. “I wanted something old,” says Gale. “It would have been hard for me to go from that old plantation house to something brand new.” She knew about an old schoolhouse constructed on the island in the 1920s—after all, she’d been in and out of it since she was a child. “It was a neat building, and the interior had a lot of integrity,” says Gale. The couple felt that the structure, used as a black schoolhouse until around the 1950s, had great bones and incredible potential—and it was conveniently just down the road on land once owned by Gale’s great-grandfather. Upon purchasing the house, the couple brought their project to Palmetto Craftsmen, Inc., a company that specializes in historic restorations. Hunter McEaddy Dawson, a cousin of Bill’s, took charge of the architectural challenges inherent in transforming a building from schoolhouse to home, and the year-and-a-half long process began. Not So Elementary… First up: moving the building from its present location to the Thompsons’ property, a stretch of land fronting Store Creek. In addition to all the considerations required to move such an old building, they also had to work closely with the Department of Transportation to ensure no old trees or other natural habitats were disturbed along Highway 174. “It’s a little bit more involved than I think most people realize,” says Bud Hay, vice president of Palmetto Craftsmen. As for the the actual transformation, “We had to take something that was nearly 100 years old and bring it up to modern building codes,” says Hay. “There was no electricity, no plumbing, no heating or air. All of that had to be added.” For Gale and Bill, one of the most important parts of the restoration was maintaining as much of the original fabric of the building as they could. All 12 windows on either side are original to the schoolhouse, along with the yellow pine floors and much of the beadboard on the walls and ceilings. When parts of the walls or ceiling had to be removed, as was the case in creating a hole for the stairs, they reused that beadboard in other areas of the home. Liveability and comfort were also key factors for the Thompsons, who have two daughters, Bel, eight, and deRosset, six. And fortunately the building had plenty of room to create a second floor, which was converted into two bedrooms and two bathrooms, along with a playroom, for the girls. They even saved some of the original chalkboard frames (the slate had long since been removed), so that each would have a drawing space over her bed. “The girls love the chalkboards,” says Gale. “They play tic tac toe, and we have fun leaving each other notes.” But Gale’s favorite additions to “the schoolhouse,” as the family now affectionately refers to it, are the porches, which stretch some 60 feet around two sides of the home. “I knew I wanted porches with French doors all the way across,” says Gale. “I wanted to bring the outdoors inside.” Scholarly Simplicity Gale brought in friend and interior designer Kimberly Glenn, owner of Kimberly Glenn Interiors, to help her achieve a clean, uncluttered look that would serve as a comfortable refuge the entire family could enjoy. “We wanted the schoolhouse to stand out, not the décor,” says Glenn. “I didn’t want to take away from the architecture of the building.” They chose a pluff mud color for the walls, accented by splashes of hydrangea blue on pillows and chairs, and used lots of chocolate browns and other earth tones in keeping with the natural theme. And rather than putting a heavy emphasis on new acquisitions, they chose a few memorable pieces, such as the old chopping block that sits near the kitchen, a carryover from Seewee Supply, a general store that Gale’s great uncle once owned, or the red trunk in the master bedroom culled from her parents’ house up the creek. For Gale and her family, the home is all about giving new life to something old and exposing a new generation to the joys she knew as a child growing up on the island. “Edisto is a part of our lives,” says Gale. “I want my girls to know the island and love it.” And what better education than from inside the walls of academia itself?