On March 18, 1839, the Irish organization known as the Hibernian Society laid the first cornerstone for a new hall at 105 Meeting Street. The building has survived fire, war, the 1886 earthquake, politics, and innumerable St. Patrick’s Day celebrations. Included on the National Register of Historic Places, it reigns today as one of the most notable examples of classical architecture in Charleston. In addition to hosting Society gatherings, it’s among the city’s most well-loved venues for weddings and events 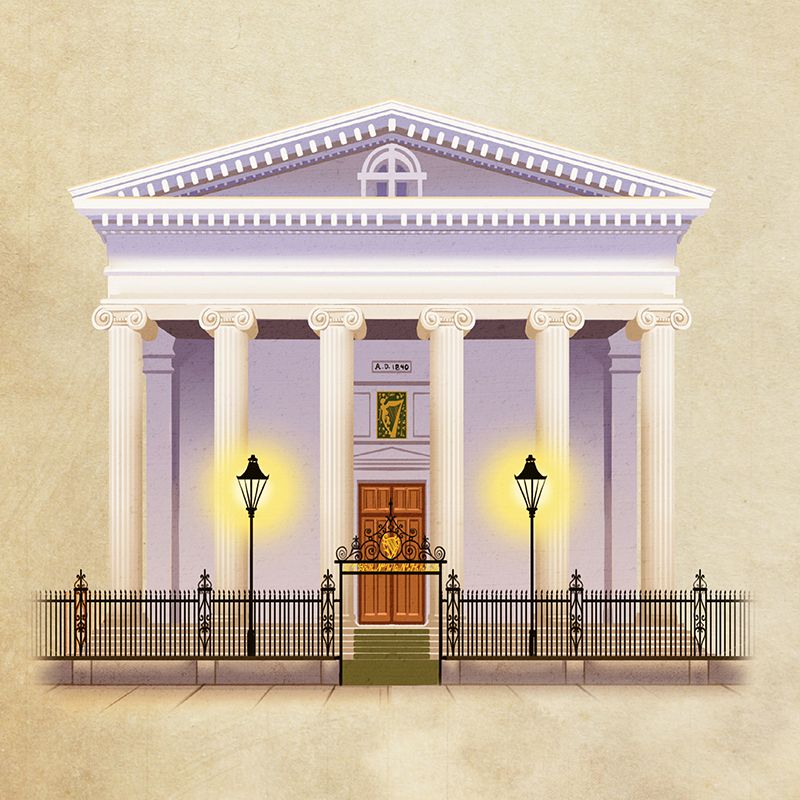 A Giving History  In 1801, Charlestonians of Irish descent founded the Hibernian Society as a benevolent organization that would provide aid and assistance to new immigrants. By the mid-1800s, the all-male group had become one of the city’s most important social clubs, with membership being passed down from generation to generation.

Exclusive Affairs  Each March 17, the Hibernian Society celebrates St. Patrick’s Day with a formal banquet at the hall. The building also sets a beautiful stage for the elite St. Cecelia Society’s annual ball, where many Charleston debutantes make their bows.

Reviving Greek Grandeur  Designed by Philadelphia architect Thomas Ustick Walter—famous for his work on the capitol dome in Washington, D.C.—the structure was the first in Charleston to be built in the northern Greek Revival style. It was modeled after a temple on Athens’s Illisos River built in 449 B.C.

Political BedFellows  During the contentious 1860 presidential election, the hall gained national significance for its use as the Charleston headquarters for Democratic presidential candidate Stephen A. Douglas. While the first floor held meetings and rallies, the second housed hundreds of cots, serving as living quarters for out-of-town conventioneers.

Disaster Falls  The Great Earthquake of August 31, 1886, brought the massive pillars and pediment crashing down. In rebuilding, the original ionic pediment was replaced with Corinthian features. The wrought- iron lamp posts also took a tumble. They weren’t reinstalled until the 1940s, when Mrs. Lionel Legge found them in a local antiques shop and raised $300 for their purchase and restoration.

Noteworthy  Renowned Charleston ironworker Christopher Werner crafted the lamps as well as the gate that’s crowned by an Irish harp (the same shape is carved into the panel above the main door).