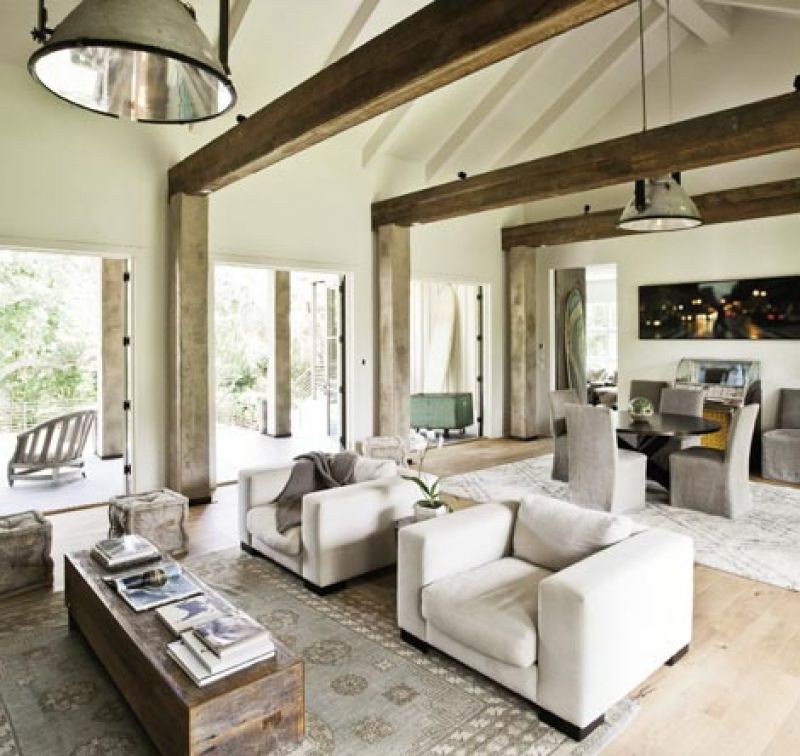 Beach dwelling is different. Maybe it’s all that salt that swirls up from the ocean and spices the breeze, or the way neither sand nor swells ever really stay put. Nature just has a way of taking over out there, replacing business with pleasure, work with an inherent air of play that’s tough to shake. You can leave it behind, but it’s right there when you return. It’s always there.

California-bred Alex Opoulos knows this easy-does-it ethos by heart. He grew up in Newport Beach, then moved east to Isle of Palms in 1994 to be closer to his mother, a Charleston native. It was a straight shot from one coast to the other, no inland stints in between. Hence, the modern and mellow digs he designed with his wife, Monica, and interior designer Cortney Bishop—a nod to a new brand of buoyant, breathe-easy design that emerges when East Coast meets West.

But before all that—before the rear wall of glass doors and grassy playground; the watery, ceiling-high tiles in the master bath; or even the low-profile furnishings that exude California’s leisurely design roots—there was a different house. This one a small, 1960s ranch Alex bought in 2003 on the same half-acre plot of land. “I’ve always loved being on the ground,” says Alex. “You open the doors and step right out onto the grass or to the pool; that kind of seamlessness is very appealing.”

And very Left Coast. But it was here, by the Atlantic, that he found Monica, and what followed was a whirlwind romance, a
wedding, their son, and a little family-forward thinking. “We knew we’d need something bigger, but we couldn’t buy another lot like this one. And it didn’t make sense to raise that house off the ground, so we decided to start over,” he says.

Starting over meant abiding by flood regulations, which sunk Alex’s dream of staying grounded. But there was a silver
lining wrapping that doomed little ranch—a new house would allow for new ideas, and big-time design opportunities.

Open Air
“I love every aspect of design: architectural, interiors, space planning… I bet I got five design magazines a month back then,” says Alex, who’s spent 18 years in wealth management. “I had so many ideas, I wasn’t even sure how they would all come together.”

Until they did one lazy Sunday afternoon—right there onto a handful of pages in his sketchbook. There was a master bedroom and oversize bath at one end, a kitchen that stepped out to an open-air porch at the other, an airy central room in between—no interior walls, just plenty of exterior doors for opening year-round—and a second floor for kids’ rooms, a playroom, and an office. It all fit into a handsome, horseshoe-shaped footprint, and with the addition of a rear courtyard raised 14 feet to meet the back steps, suddenly,  Alex had a breezy California ranch in spirit.

So detailed was the rendering that Alex needed an architect’s help only to translate his plans into a CAD drawing. With that in hand, plus the old house razed and the lot cleared, he was ready.

Enter Cortney, Monica’s interior design pal from their college days in North Carolina.  At a party at Cortney’s Sullivan’s Island home,  Alex and Monica snooped around and promptly asked her to sign on. Not because of any architectural kinship, really—hers is a rambling, storybook beach house, theirs was shaping up as an industrial/West Coast contemporary hybrid—or to bring a slice of her pattern-laden interiors to his minimalist leanings. Rather, what they saw in Cortney was a flair for the avant-garde, a pro who could blend bold ideas into a backdrop that first had to function for a sand-and-surf family of four (Max is six, and Maya, three).

It didn’t take long. After reviewing their plans and making a few minor tweaks, her first pitch was a pair of steel, three-and-a-half-foot-stadium lights to hang among the rustic wood beams in the lofty living room. Bold, indeed. Alex loved them (but didn’t love that they ate up 40 percent of their lighting budget), Monica didn’t like them at all, and Cortney said, “You’ve just gotta see them up in that room.”

It worked. “Now, I can’t imagine the space without them,” says Monica.

The tiles in the master bath—slim, blue-green brick-pattern glass—were another sound, yet strong, pick. “Alex and Monica liked them right away, and I thought, Why stop at waist-high? Why not tile all the way to the ceiling?” recalls Cortney, who further broke from convention by hanging them vertically. “To me, it looks like rainwater dripping down the walls.”

Second Nature
These strong, elemental aesthetics fell right in line with Alex’s California-born ideals that called for blurring the lines between indoors and out. “By limiting our materials to just a handful—concrete, wood, and glass, accented by metal—we kept the
focus on this relationship,” explains Cortney.

But these materials also tilted industrial, which presented a challenge for Monica, whose tastes lean a little softer. She worried the house would come off “stark.”

“That is one of the reasons this collaboration worked so well,” says Cortney. “Alex favors clean and modern, but Monica brought us back when we went too far, when the house needed warming up.” This meant switching out concrete floors for beachy white oak, trading in cool blues for warm taupes and earthy grays, and washing the wood beams and concrete columns in low-voltage lighting.

The furnishings selections, too, had to offset the mod materials. Low-slung, “horizontal” pieces like a Thomas O’Brien chaise and Holly Hunt-inspired sofa in the kitchen sitting room are paired with sandy-hued pillows and a Moroccan shag rug to relax the room further. “The key was emphasizing texture,” says Cortney. “Using fabrics like cotton suede and plush velvets softened the look and made the rooms more accessible.”

But the big score for keeping harsh, uber-mod edges at bay happened in High Point, North Carolina, when Cortney took the pair to the Environment showroom—a “rough luxe” organic line with a Southern California pedigree. “We looked around and said, ‘Okay, this part is going to be easy,’” Monica recalls of falling hard and fast for a rustic platform bed made from Brazilian peroba, a black leather sofa, and a reclaimed wood dresser with stainless steel detail. “The lead designer—a gentleman from Rio—sat us in these low chairs, put caipirinha cocktails in our hands, and we knew it was all coming together.”

All three smile big at the memory, but their Brazilian host struck a chord that day. His breezy welcome, take-it-easy tack, and well-designed goods were a lot like home: relaxed, a little bit rustic, and wholly instinctual.

“Besides the bedrooms, there’s one room we designed to be separate—out of the flow,” notes Monica, of the upstairs playroom she and Alex thought would be a no-brainer haven for Max and Maya. She laughs and points to the traffic jam of cars and other games under the stairs in the kitchen, then the wicker toy baskets lining the big windows in the great room. “There’s nothing we can do to get them to use the playroom—it’s the one thing about our design that didn’t really work.”

Which means the rest of the house did, in a major way.

“The whole house is their playroom, and ours, too—indoors, out, it’s all the same,” says Monica. “It connects us, and that’s a wonderful way to live.”

Alex agrees: “You draw the house, you try to make everything work as you think it should, and then you live in it. And the bonus, the big return, is realizing that living in it is better than you imagined when you drew it.”

Design Principles at Play
{Cortney says:}
Rotate: “If you buy one piece, you should be able to use it in any room. Move stools from one space to another, swap your art every once in a while. Changing things up makes better use of your investments.”
Balance: “You don’t have to put all modern pieces in a modern room. Juxtapose contemporary with timeless.” (See the antique rug she and Monica chose for the glam master bath.)
Layer: “Lighting in layers (track heads on the beams, spotlights washing columns, dimmers on pendants) softens edges and alters the mood.”

{Alex says:}
Stay Low: “Left to my own devices, I’d have everything low and horizontal—like a lounge. This keeps the views continuous and the outdoors in full view.”
Find Peace: “A master bath shouldn't be all about function. It’s where you start your day, so it should be serene, like a spa.”
Make It Livable: “We kept our floors unpolished, we don’t have white sofas, and there’s nothing here that doesn’t stand up to stress. It’s easy.”