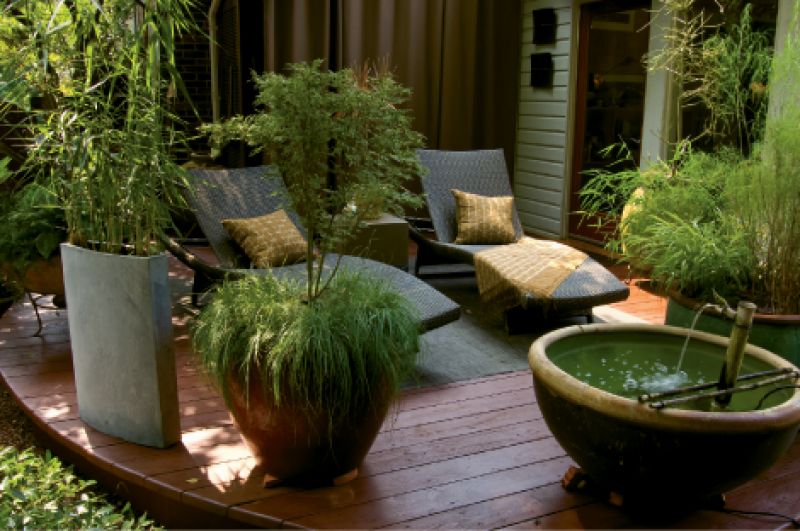 Amelia Johnson and Scott Hornsby’s home is the sort that causes motorists to slow down for a better look, even on their busy street in West Ashley. The house itself is striking enough: a 1920s brick bungalow transformed by jungle-green Bermuda shutters and an Asian-inspired entry with double glass doors topped by mahogany paneling and flanked by glass bricks. But when strangers come knocking to request a tour, it’s usually the unconventional garden they want to see.

“I shy away from anything that looks too traditional,” says Amelia, the household’s head gardener for the past 24 years. “When it comes to plants, flowers just aren’t my thing. Most of them are too much trouble. I’m more intrigued by the textures and shapes of different leaves and grasses, by the way they move and the subtle variations of green among them.”

It’s an aesthetic she attributes to her love of art, mid-century modern furniture, and architecture—three passions evident in the eclectic mix of shrubs, grasses, and ivies that skirts the sidewalk; in the red-framed Brown Jordan lawn chairs resting in the curve of a plant bed; and in the dramatic pair of desert spoons that reign over the front yard from giant, wok-shaped containers. “We originally had Japanese maples here, but they started to die—because of standing water, it turns out. We relocated the trees and put planters in their places,” notes Amelia. “The desert spoons are the most dramatic, architectural plants I’ve ever seen. I just love them.”

And on a walk through Amelia and Scott’s garden, “I just love it” is the phrase you’ll hear her say more than any other. “I don’t draw up sketches or follow formal rules. I mostly just buy what speaks to me,” says the Charleston native. Of course, this method works a bit better today than it did in 1986, when the recently wed couple bought the house. Then, the front yard was nothing more than dirt and the back an unlandscaped playground for rabbits that was surrounded by a wire fence and presided over by two magnolia trees.

“I’d only owned one plant in my life, but after a year of looking at all that dirt, I knew I had to do something,” says Amelia. “First, we built a new wooden fence, then I went plant shopping. Of course, most everything I bought was wrong.” Nevertheless, her interest was piqued, and for the next three years, she honed her green thumb in yards front and rear.

But Mother Nature had some landscaping plans of her own, delivered in the form of Hurricane Hugo. “In repairing damage to the back fence, we decided to move it over, incorporating the garage and some of the driveway,” Amelia says. With more room to dig, she grew her early plant bed into a circle-shaped jungle at the yard’s center. “The ligustrum, maple trees, and crepe myrtles have grown quite tall, shading most of the garden, so I use things like cannas, fatsias, ferns, and nandinas that don’t need much sun,” she explains. “Together, they create a wonderful, lush feel.”

Adding to the impression that you’ve stepped into a tropical paradise are an elaborate arbor and two decks, all dressed to look like “little rooms of their own”—complete with comfortable seating, weather-resistant rugs (“for a more modern look”), bubbling fountains, and containers full of plantings that range from Amelia’s adored ‘Butterfly’ Japanese maple to succulents and small water gardens. “I love water plants. Fill a container with a really muddy dirt that holds moisture well, and they require little care but provide a lot of visual interest,” advises Amelia.

In fact, for 20-some years, she and Scott tended a significantly larger water garden—a 2,500-gallon koi pond tucked into a secluded area behind the shed. But it sprung a leak in 2008, prompting the pair to redesign the “room” with an emphasis on low maintenance.  The result? A Zen-style garden featuring a “lawn” of crimson river rocks that sets the stage for a large container filled with succulents. Plantings leftover from the pond years—a Japanese maple, bamboo, and nandina (known as “heavenly bamboo” for its similar look but less-invasive nature)—enhance the Eastern feel, as do the large stones strategically placed in the rocks and the teak wall hangings that adorn the shed. “I’ve always loved Asian things, so a sort of Zen aesthetic evolved rather naturally,” explains Amelia.

And this latest addition to the landscape does reflect a sense of enlightenment—peace, even—that its designer has achieved after a quarter-century of playing in the dirt. “I’ve finally learned to choose plants that can handle our heat and humidity, and I made them the focal point with the succulent garden. It hardly needs watering, and all I have to do is pluck weeds from the river rocks occasionally, making it far easier than any other ground cover,” says Amelia.

“Honestly, I’m more relaxed about the whole garden these days. I’ve come to accept that nature will take its course. No matter how wonderful things are in the spring, they will look horrible by the end of summer—you just can’t fight it. Instead, you enjoy the beauty while you can and then look forward to the pleasures a new season will bring.”