Full House
September 2011
PHOTOGRAPHER:
Peter Frank Edwards
When it comes to collecting art and giving back, more is more in the Radcliffeborough home of Juan Tamarit and Dr. Gerald Dabbs. 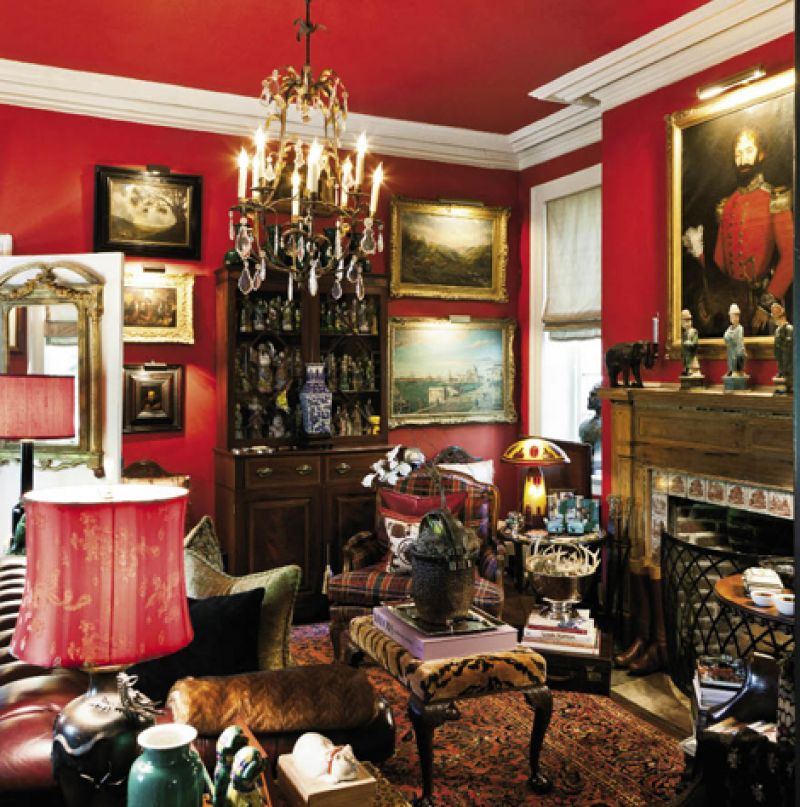 In 2008, when Juan Tamarit and Dr. Gerald Dabbs purchased the property that local kids used to call the “Pitt Street Mansion,” they became stewards of one of this city’s architectural grandes dames—a circa-1843, two-and-a-half-story brick Charleston single that previous owners had meticulously restored to the specifications of its preservation easement. Now infused with the couple’s passion for art and penchant for gardening, the home is resplendent in lush tropical surroundings and equally luxuriant interiors. “We’re minimalists,” jokes Juan. “We have minimal wall space.”

The punch line is evident in the copious eye candy that adorns and predominates their house. Every room brims with fine furnishings, paintings, sculptures, and other objets d’art—a color-happy smorgasbord of texture, form, and media. “The first time friends visit, they can be a bit overwhelmed,” explains Juan, a travel-industry entrepreneur and interior designer, “but by the time they leave—it’s just fun.”

“It’s not a dust issue,” says Juan with a laugh of these 5,000 square feet and their ample, ornamental trappings, “it’s a lust issue.” With a scope that spans from the ancient and exotic to the contemporary and local, the couple’s markedly diverse collection may initially present a challenge to beholders who attempt to discern a unified motif; but spend some time absorbing and indulging in the experience of this residence, and a distinct décor philosophy will emerge: unexpected approachability in abundance.

Although many of the works are those of esteemed artists—Picasso, Warhol, Rauschenberg, Haring, Cezanne, and Rembrandt (to name a few)—the pieces are not presented in the kind of hands-off gallery format one might expect. “It’s where we live, not a museum,” explains Gerald. “When people come to visit, we want them to feel at home amidst the art.” Juan adds, “The whole point is to share it.”

Towards that end, he and Gerald, a child psychiatrist and an associate professor of psychiatry at Cornell University Medical College, have been committed philanthropists and patrons of the arts, with involvement in numerous local nonprofits including Redux Contemporary Art Center, The School of the Building Arts, and the Preservation Society of Charleston. They’ve also been benefactors for several local artists, supporting individual shows and even providing housing for an artist in need.

Motivated by gratitude for the beauty in their lives and for the realization of their dreams, the couple says their goal is to encourage talent and increase the exposure of young people to the arts. During 16 years of traveling the world together, they have not only acquired a noteworthy collection but also garnered an art history education, established a discerning eye, and developed an ever-growing appreciation for the symbiosis between creative expression and human advancement. “You can track the development of civilization through art,” says Gerald. “If you destroy people’s art, you destroy their spirit.”

Though Juan and Gerald are serious collectors, they don’t take themselves too seriously, as is most apparent within the guest rooms and their eclectic, amusing themes. The “Safari Room” features a deer head and a 1950s alligator-skin motorcycle jacket. In the “French Huguenot Room,” you’ll find a lovely carved piece of doorway, which Juan acquired while dumpster diving in New York. There are stories attached to every item in the midst. “It’s very personal,” admits Juan, describing the lure at the core of his just-gotta-have-it decisions.

Sometimes the story behind a piece, the time and the place in which it came to exist, is the very thing that inspires a purchase, as was true in the case of an ottoman that they spotted at the Bernie Madoff auction. Other acquisitions, like the antique maps that tap into Juan’s childhood love of geography, stem from an intangible and deep emotional tug rising up from memory’s well.

Aesthetic appeal certainly plays a big part in what draws the duo; however, equally often, the pull comes from admiration for an aspect of the artist’s process—some characteristic of the labor, the devotion, and the creativity—that strikes them as exceptional. On a casual tour through the house, Juan points out numerous examples of this magnetic methodology.

“Whether it’s the pigments that were chosen and what a certain color meant to that culture, or the risk that an artist took to speak out in a particular moment in time—it’s about not taking it for granted,” he says, proffering an elaboration of details and an unhindered exuberance that clearly illustrates his palate has not been jaded by his experience. “It’s about what inspires the awe.”