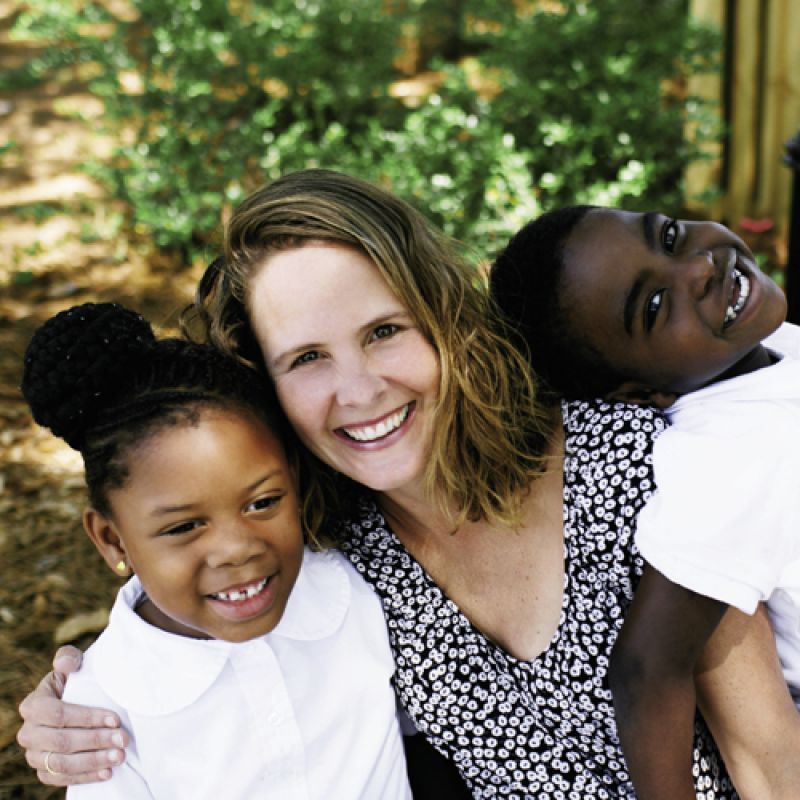 “Soar more.” Sounds like it could be a snappy bumper sticker for Boeing, but it’s actually the mission behind what some believe could be the next “Big Thing” in education for students in South Carolina, and maybe even the country. “Helping kids soar” is the battle cry of WINGS for Kids, a Charleston-based nonprofit that is the only program in the country focused solely on developing and improving social and emotional intelligence—all the “soft” skills and character traits that don’t show up on standardized tests or report cards but are the building blocks of a well-balanced, successful person—through after-school programming. And soaring more is not only what WINGS kids in various Charleston schools are doing; it’s the current flight path for the organization itself under the leadership of its supersonic CEO, Bridget Laird.

The 37-year-old Laird is a tanned, easy-going Mount Pleasant mom of two young kids; fresh and sparkle-eyed, she looks more like an outdoorsy camp director or spunky coach than a boardroom executive. A former collegiate soccer player at North Carolina State University, Laird is a determined, gutsy, full-speed-ahead team player, qualities that are readily apparent even though her “field” is a fast-growing nonprofit rather than a fast-action soccer game. “I was always a hustle player,” says Laird, who was a forward and goal scorer in high school, then switched to defense in college. “I loved hustling and running a lot. I had a lot of energy, still do.”

“Hustle” might be an understatement. At WINGS, Laird leads a full-time staff of 38 and a part-time AmeriCorps-fueled program staff of 140-plus college-aged WINGS leaders; travels between Charleston and Atlanta, where the organization just completed a second full year of replicating its innovative after-school program; and is plotting world dominion—at least in terms of bringing WINGS’ effective model of social and emotional learning to even more kids across the country.

What was a fledgling start-up operating out of founder Ginny Deerin’s basement in 1998—when Laird, fresh out of college, signed on to help run a small summer camp for a handful of girls on a feather budget—is now a robust national model program impacting more than 1,200 boys and girls every school day in 10 schools in four cities and three states with an annual nest-egg budget of $6 million. “Bridget is leading WINGS through this major evolution, and I believe that she could end up becoming one of the nation’s most important and influential voices in education,” says civic leader David Rawle, who serves on the WINGS board. “How exciting that an education initiative with the potential impact of Teach for America has been launched right here!”

If recent major national grants (last year $2.5 million from the Edna McConnell Clark Foundation and $410,000 from the Wallace Foundation) and big-dollar charitable investments are any indication of broader WINGS buy-in, Rawles’ prediction isn’t unfounded, and WINGS is certainly not fly-by-night. But to the laser-focused Laird, it’s still at heart the same scrappy organization she was attracted to nearly 16 years ago when she noticed a newspaper ad: “Want to help girls be joyful, powerful, and responsible?”

“That caught my eye,” says Laird, a Pittsburgh native (and die-hard Steelers fan). She and her then-boyfriend, now-husband, Mike, a College of Charleston graduate (also from Pittsburgh and also a collegiate athlete: baseball player) were looking for Charleston-area jobs after a brief and unfulfilling stint selling snow cones in San Francisco. Laird, who was happy to have been recruited to play Division I soccer in the warmer climate of Raleigh, liked the fact that Charleston would be even hotter still. “As a Parks and Recreation major, I had worked at YMCA camps and done a lot of youth outreach with our soccer team. I knew I wanted to work with kids, I just didn’t know what that would look like,” says Laird. “But ‘Joyful, Powerful, Responsible’—I got that.” Laird dialed the number on the ad, got the home phone of Ginny Deerin, and soon met Deerin at the local Starbucks for coffee and an interview.

Off the Ground
Back in 1996, when Deerin first launched WINGS for Kids, the concept of social and emotional learning, now a growing movement with a recognizable acronym (SEL) in the national education conversation, was hardly mainstream. Her vision for how to help kids become joyful, powerful, and responsible adults was ahead of the curve, but really so simple, so old-fashioned. Academic success requires more than book smarts, Deerin understood. Meanwhile, schools were becoming increasingly outcome- and test-score driven, yet more and more schools, and students, were falling short. The missing piece, Deerin and others in the nascent SEL field believed, was emotional intelligence. When the ability to perceive, control, and evaluate emotions is bolstered by self-awareness, empathy, and self-management, then all kids, and especially those who are under-resourced, are better equipped to succeed.

But figuring out how to teach this, in a scalable and measurable framework in today’s complex education bureaucracy, has been as challenging as, well, learning to fly. Undaunted, Deerin began researching everything she could find about SEL and scrounging together every possible resource to fund the efforts. But after two years in start-up mode, Deerin began running out of steam. “It was a challenging time,” she recalls. “I had put everything into trying to get WINGS off the ground and felt like I was crawling through the desert. Then there Bridget was, offering a cup of water. She just arrived and was such a vessel pouring enormous energy and optimism into the organization.”

Uncommon Core
Shortly after Laird was hired, new research suggested that SEL programs were more impactful if taught in shorter, more frequent intervals, so WINGS shifted gears from a summer girls camp module into an after-school program at Memminger Elementary, targeting boys and girls in lower-income families. “When we opened the doors, we only half knew what we were doing,” Laird confesses. “What shocked us most was the kids’ behavior. We didn’t know it would be so challenging.”

Now after more than a decade of honing program design and methodology, WINGS’ well-codified curriculum teaches 30 different social and emotional learning objectives during three-hour sessions each day after school for the course of the academic year. Each learning objective builds on the previous one, and each directly correlates to one of WINGS’ five core competencies: self-awareness, relationship skills, social awareness, self-management, and responsible decision-making.

The WINGS “creed” (see sidebar, page 113)—complete with adorable hand motions—singsongs off the tongue of every WINGS kid. The atmosphere at Chicora Elementary, one of the four Charleston-area WINGS schools, is joyfully boisterous as kids sing silly songs, play zany games, and snack on fresh fruit. WINGS leaders, which Laird once was, weave purposeful fun-and-games with homework help and are pros at capitalizing on teachable moments. So, for example, if the learning objective is self-awareness, then when Tasha gets annoyed with another child elbowing her at the table, the leader encourages Tasha to let the other child know how she feels.

The program is regarded as “an innovative beacon within the social and emotional learning community,” according to the CitiesSpeak blog, and is being evaluated by leading researchers at the University of Virginia who are undertaking a four-year, $2.8 million assessment of WINGS’ impact on behavior, attachment, social and emotional development, and academic achievement. If the UVA findings support what internally tracked data has already demonstrated—that 87 percent of WINGS kids received average or higher classroom “behavior” grades; 96 percent of WINGS students had school attendance rates of 90 percent; and WINGS students’ graduation rates were 40 percent higher than the comparison group at the same school—then WINGS will be poised to attract even bigger funding investment for broader replication and implementation. “My goal is for this to go national,” says Laird, who became CEO in 2011, succeeding her mentor and role model, Deerin. “I want to impact as many kids as we can. And I think it’s doable. That’s another thing,” Laird adds, “I always think things are possible.”

Taking Flight
Laird’s soaring optimism is grounded in a passion that comes from being a hands-on WINGS leader and seeing firsthand how kids’ lives can change. When she signed on in 1998 for barely any money and stayed on when funds were short and payroll was missed a couple of times, it wasn’t because she was young and naïve, but because she was committed, because she saw what these kids were up against, because of kids like the fourth grader in her first “Herons” group (WINGS groups have bird names) who said, after Laird shared her exciting news that she had just gotten engaged, “Oh Miss Bridget, why do you have to go and get married? Now you’re going to get black eyes and bruised up.” “I realized all he had ever seen were abusive relationships; he couldn’t understand a relationship could be full of love, support, and trust. And I realized right there that I needed to bring WINGS to as many kids as possible, to bring the relationship skills we were teaching to thousands of more kids,” says Laird, who credits her WINGS training with improving her own skills in parenting her daughter, Reese, age 10, and son, Heath, three.

And because she’s seen the positive impact WINGS has on kids like Richard White, who was also one of her first group of “Herons” and now is a college graduate working as an accountant at MUSC. “Miss Bridget was my group leader. She was awesome from the beginning—always there to help in every little way she could. I had attitude problems in elementary school, and she’d take me aside and explain to me where that attitude could lead me. If you could have seen me back then and how I am now,” he adds, “it’s pretty hard to believe. And Miss Bridget played a big part in that.”

To some, it may also be hard to look at WINGS back then—when Laird showed up for her first day of work on a Sunday afternoon to stuff envelopes in Deerin’s basement—and where it is now and imagine what a long, grueling, and inspiring journey it has been. But as the bird flies, it’s been a pretty straight line, one guided by passion and dedication—and plenty of hustle. “Bridget is a believer,” affirms Deerin. “And when she believes something, nothing stops her. Bridget lives WINGS. She is WINGS. She’s always lived joyfully, powerfully, and responsibly, but now she does much more so because of WINGS.”

Soaring Stats
WINGS for Kids By the Numbers

Last year, WINGS kids had higher attendance rates than non-WINGS kids at 100% of the organization’s program sites.
WINGS students’ graduation rates were 40% higher than the comparison group at the same school.
Charity Navigator gave WINGS its highest rating—four stars—which is defined as “Exceptional: exceeds industry standards and outperforms most charities in its cause.”

I soar with WINGS. Let me tell you why.
I learn lots of skills that help me reach the sky.
I love and accept who I am on the inside
and know my emotions are nothing to hide.
Life’s full of surprises that make me feel different ways.
If I can control myself I will have much better days.
I understand the choices I make should be what’s best for me to do
and what happens is on me and not any of you.
I understand others are unique.
I want to learn more about everyone I meet.
I want to step into their shoes and see what they are going through.
I am a friend. I support and trust.
Working together is a must.
Kind and caring I will be.
I listen to you. You listen to me.
I soar with WINGS. I just told you why.
All of these things are why I fly high.