Family Drama
May 2011
WRITER:
Melissa Bigner
Family or theater troupe? How about both? Meet three families who make their lives together on stage and off 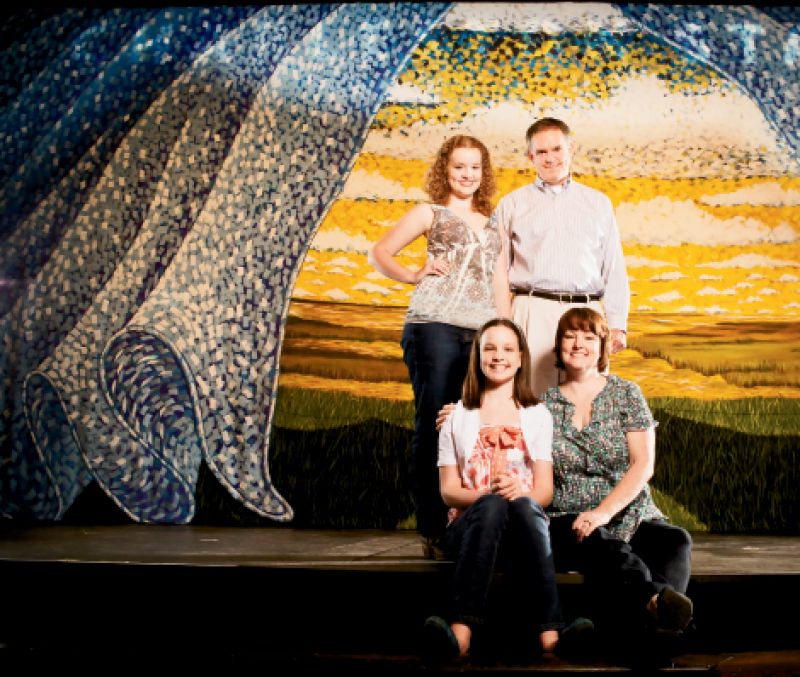 Every family is comprised of characters, each member playing his or her role from provider to nurturer, sports star, straight-A student, trailblazer, jokester, and on. But what about a family that intentionally dons these personalities, swaps them around, and dares hold their interpretations up for audiences to see, spotlights included? So it goes for three Charleston-area families—the Clarks, Graci-Rogers, and Wegner-Ahlerts. With kids who have been raised during rehearsals—naps taken in audience seats and homework done sitting cross-legged in aisles—and homes that are as much cast-party havens and acting class studios as they are abodes, they make it work. Here’s a peek behind the scenes of lives that are all about theater.

Talk with Marybeth Clark, associate artistic director for the Dock Street Theatre’s resident company, Charleston Stage, about being a mother, and it’s clear that she’s quite thankful for the men in her life. First, there’s her husband, Victor—a travel-agent-by-day, father-slash-actor by night—whom she credits as the ultimate Mr. Mom. “We figured out that for eight months one year when the girls were little, he cooked, bathed, and put them down to bed on his own,” she says of the man she met when the two were doing summer theater at the Greenbrier Valley Theatre in West Virginia. For Marybeth’s part, when kids Prentice (now 15) and Lila (now 10) were preschoolers, she’d take them late to daycare, then would pick them up early in order to pack in Mommy time before the after-5, before-rehearsal trade-off with Victor. “He’d drive to the Dock Street,” she says, “I’d hand them to him through the green-room door, and he’d drive off. No parking meant it all happened faster.”

And then there’s Julian Wiles, founder and producing artistic director for Charleston Stage. “He’s a very child-friendly boss,” Marybeth says, explaining that when she first began working at the theater in the 1990s, she was pregnant with Lila. When she returned to work, Marybeth occasionally enlisted him for baby help when, say, she’d forgotten breast milk in the office fridge and he would courier it to her. “He’d show up, hand me a brown paper bag with the bottle, and we’d start rehearsal like it was nothing,” she laughs.

So it goes for the Clarks. The troupe works together on productions (Victor, too, now that the girls are older), attends summer workshops and camps, hosts cast parties at their West Ashley home, and even plans vacations around shows. The girls especially loved their post-Christmas trip to Broadway. Prentice, who attends the Charleston County School of the Arts, sees herself big-light-bound after college; and Lila, who attends West Ashley School for the Creative Arts, aspires to play Annie, there, somehow, someway, someday.

And if acting doesn’t pan out for the youngest Clark, the tween might have a Barbara Walters-style backup career. When given the voice recorder and asked to pose questions to her sister and father on tape, she turned to Prentice and asked if the teen gets parts because her mom’s the director. “No,” said Prentice, “if anything I don’t get parts because of that. Julian’s the only one who casts me in anything besides the chorus.”

And Dad’s turn: “What’s it like having a wife who’s always at rehearsal?” asked Lila. “Well, if we didn’t both love the theater, I don’t know if it’d work,” Victor replied. “But I understand her passion and support it. We’re lucky to live a life immersed in what we love to do. It’s pretty amazing you and your sister go to arts schools, that your mom is the associate director of a theater company and making a living with it. And that I finally got to play Atticus, like I’ve always wanted to. All of that outside a major city is kind of amazing.” With that, Lila, satisfied, returned the recorder. And… scene.

Pure Playtime
In the living room of a modest two-story John’s Island townhouse, people and pets keep tumbling in to take their place on the living room sofa and chairs. Heading up the self-described “amoeba of carnies,” (five kids, a cat, and a dog) are Pure Theatre founders Rodney Lee Rogers and Sharon Graci. Their human brood includes the couple’s daughters Bella (age six) and Mia (eight), and Sharon’s kids from a previous marriage, Sullivan (“Sully,” 17), Tripp (21), and Tucker (19)—the latter of whom is at soccer practice this afternoon.

Yes, everyone lives here thanks to bunk beds and yes, admits Sharon, “It’s like a clown car.” But since the group is nearly always on the go, they are not long atop each other. For her part, Sully, a junior at the Charleston County School of the Arts, bolts for More Fun Than Bowling rehearsal in North Charleston.

“Sully has her show, which opens this Friday,” says Sharon, talking out logistics for the pending weekend, “and Rodney and Tripp and I have to be at Superior Donuts that same night. And the little girls, they’ll likely be with either Rodney’s parents or his sister, since they live here.” As for Tucker, he’s the only remaining theater holdout in the family, preferring sports over the stage any day.

“We tried to keep a calendar,” grins Rodney, “but it’s a waste of time, since you plan but then something gets pulled out. It’s like Jenga.” But theirs is a game they wouldn’t have any other way. Rodney and Sharon met in 2002, when he came to town from New York to make a short film and during his stay auditioned for a play. After reading the script, he says he cringed when he saw his character was to lock lips with a love interest. “That’s always a little awful, especially when you don’t know who it’s going to be,” Rodney jokes, “but then in walked Sharon, and I was like, OK!”

Sharon, who founded Pure Theatre with Rodney in 2003, smiles before explaining other family members’ paths to the biz. Tripp is the newcomer, having recently left college and soccer to pursue acting. A wisecracking charmer, he says there’s a newfound “healthy competition” between he and veteran Sully as he vies to catch up to her in the realm of mad acting skills.

“Part of the reason I feel so confident and comfortable onstage at all,” Tripp says, gesturing to Rodney and Sharon, “is because I have these two amazing actors right here to guide me. In the last audition I was prepping for, I thought I had everything down pat until I ran it by Rodney. He tore down everything I’d built, and we started from the ground up. I’m lucky to have that.”

But not all at-home dramatizations are quite so studied and serious. “We went through a period of about six months where everyone was doing a spontaneous monologue after dinner for fun,” says Sharon. “We used a flashlight as the spotlight.” Everyone chimes in remembering the sucessful after-dinner family theater. “We might have to do that again,” someone suggests to a room full of nods. Encore, anyone?

"When I was seven, my aunt invited me to the Dock Street Theatre,” says Sheri Grace Wenger of James Island’s Midtown/Sheri Grace Productions and The Charleston Acting Studio & Theatre. “I was mesmerized watching actors perform right in front of me with an energy that I’d never seen on television or in a movie. I recreated the entire play in my bedroom that very night.”

That was the start of Sheri’s lifelong affair with the stage, one that began there on Church Street; thrived in her childhood home where she wrote, casted, and directed plays for family and friends; and one that eventually led to her switching from studying psychology to theater at the University of South Carolina. Following school, Sheri returned to Charleston, where she eventually married; had Erica, then Ryan; landed in marriage number two; and acted, produced, and directed all the while.

“When I was a single mother,” says Sheri, “half of my income came from teaching acting at the Dock Street, Buist Academy, The Charleston Montessori School, and in my own living room. When my first husband and I separated, I moved to a house with a large ‘great room’ so I could hold classes there.” With the living room doubling as an actingschool,  she says Erica and Ryan couldn’t help but soak up the drama.

Ryan Ahlert—now partner with his mother in their black box theater and acting school on Folly Road—agrees. “My earliest memories are of my sister putting on talent shows and being her assistant,” he says. By the time Ryan was six, he joined Erica (whose belt-it-out Broadway-style voice made her ascension to the stage a “no-brainer” says Sheri) and Mom in Pippin. Thereafter, the trio was a fixture on the greater Charleston theater scene, whether in the footlights or backstage.

For his part, aside from a spell where he admits to being “too cool for musicals,” Ryan has reveled in nearly all aspects of the business—from set building to designing posters, producing, directing, and acting—and has fanned out into film making as well. Upon earning a theater degree from the College of Charleston, he taught drama at First Baptist School downtown, and today is credited with the more
offbeat fare he and his mom produce.

“She’s more comfortable with traditional theater,” Ryan says, “whereas I like things that are a little more experimental.” His predilections have led to screening original comedic film shorts under the The Short Attn Span Thtr moniker in their acting studio, while Sheri tends toward Crimes of the Heart fodder on their main stage.

As for working together, Sheri quotes Dickens, “It was the best of times, it was the worst of times…” but quickly adds that she and Ryan’s similarities far outweigh their differences. Ryan concurs, saying, “The way we work together, the way I grew up with and have worked with other theater people in town, it’s like one big dysfunctional family. We’re all a little crazy—but not scary crazy.”

Maybe those dynamics are what turned big sis Erica onto practicing psychiatry. After majoring in theater at Northwestern University she did an about-face, headed to med school, and today is a child psychiatrist on staff at Yale. Plot twist indeed.