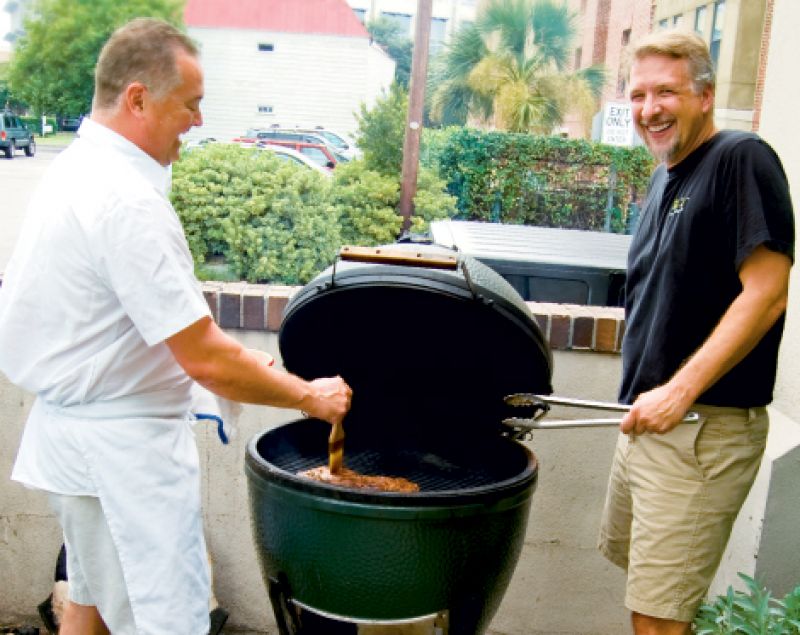 There are folks who love their grills, and then there is Ted Dombrowski and his Big Green Egg. The Ted’s Butcherblock owner’s passion for his airtight, ceramic outdoor cooker borders on fanatic. “I drank the Kool-Aid,” Dombrowski says. “I got one, used it every day, and became a convert.” So much so that the gourmet butcher and artisan food purveyor rolls out his favorite forest green grill every afternoon and cooks up something on his shop’s sidewalk to add to the menu. Tri-tip is one of his specialties.

“This specific triangular cut from the bottom sirloin was popularized in coastal California,” he says. “I think it’s a result of South American influences.” Dombrowski likes it because of its balance: both lean and marbled. “This combination makes it delicious and great for a party—it’s easy to cut in thin slices so that each person can then dress it with whatever they like,” explains the grill master.

To prepare at home, you don’t have to have a Big Green Egg, “but once you get one, you’ll never go back,” he says. Prep the tri-tip six hours prior to grilling by coating the meat in dry rub—of course, the butcher recommends his Ted’s brand—and refrigerate. Then, allow the meat to come to room temperature. “That way it will cook evenly,” he notes. On full heat, sear the cut for two minutes on each side. “You’ll know it’s a good sear when it lifts off the grill. If it sticks or tears off, it’s not done cooking,” he says. Next, move the tri-tip to indirect heat for 40 minutes, basting every 10 minutes to keep it moist. Slice it up with his pepper-tomato relish, and you’ll have, as Dombrowski says, “a damn good piece of meat.”