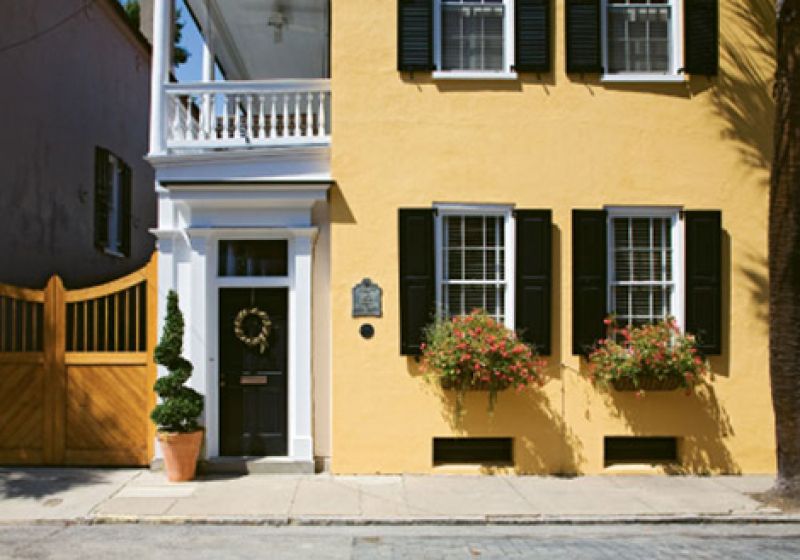 There are no piles. There’s no clutter. And no cute arrangements of collectibles or zealous population of pillows. “I like throwing things away,” explains a very pregnant Marni Rothschild Durlach, resting a hand on her perfectly round belly in the kitchen room of the Society Street home she shares with her husband, Marcus. “It’s actually one of my favorite things to do. My dad’s a minimalist,” she explains. “I come from a long line of people who’ve always thrown things away. “And to me,” Marni continues, “the more stuff you have in a house, the less you can see its bones, and we really like the bones of this house.” The bones in question are strong and handsome, and some of the oldest in Ansonborough. While most of the neighborhood succumbed to the great fire of 1838, the stout masonry walls of this three-story single—known as the Juliana DuPre House for its original builder—still stood. In fact, when Historic Charleston Foundation initiated its Ansonborough neighborhood restoration program in 1959, the Society Street abode was one of the first properties they bought. Around that time, the footprint of the home’s original kitchen house was discovered. Today, a slim, interior steel stairwell joins the main house to the kitchen house, resurrected using authentic period masonry and woodwork methods in the 1990s when then-owners Toni and Earl Jackson gave the house a major overhaul. Working with architect Steven Thompson, the Jacksons connected the structures, streamlined the interiors, and luxed up the bathrooms. In the end, signature modernist materials—mahogany, slate, stucco, and steel—used throughout prove that nouveau need not be monotonous or monotone. “There was so much we initially liked about this house,” says Marni, a professional photographer whose well-trained eye knew it to be an aesthetic slam dunk when she first saw it in 2006. “The setup was perfect,” she continues, noting that a ground-floor room by the entrance satisfied her need for a home office, one that clients wouldn’t have to traipse through the house to reach. “And,” she adds, “we loved that it was sleek and not too fussy for a downtown house.” She’s right. While stately and historic, the home is nonetheless understated—there are no ornate moldings, no overly formal spaces. And the Durlachs amplified that vibe, opening the kitchen’s rear wall with a large picture window, adding a second-story terrace that overlooks the garden, and building a handsome, slate-trimmed pool. Taking in the resulting—and surprising—yacht-like feel of the entire property, Marni says, “It’s very shippy.” That suits her husband, a veteran seaman and the son of a son of a sailor, just fine. “We really liked that the two previous owners had done such a good job renovating and maintaining it,” says Marcus, a real estate professional and former serial house-flipper who orchestrated six or seven renovations during his bachelor days. “This is the longest—in my adult life, at least—I’ve ever lived in a house,” he confesses. He and Marni actually bought the home the same day they were engaged and later held their wedding in the back garden. As for the furnishings, everything—including original prints shot by Marni and watercolors painted by Marcus’ grandfather—represents a melding of their previous lives and acquisitions. Not much besides a dining room chandelier, a stainless steel kitchen worktable and chairs from Berlins Restaurant Supply, and garden furniture was purchased specifically for their new abode. Again, the prevailing design motif was “pare down,” not fill up. When it came to coloring their world, they opted for cool whites and a creamy pale gray. “We lightened up everything as much as we could,” says Marni. “The house needed that.” The painters dubbed the gray-tinged neutral they chose for the hallways “Durlach Gray,” which makes the mom-to-be laugh. “We tend to put it on everything,” she explains. Granted, with a new baby in the house, Marni and Marcus might have to compromise their streamlined style. Inevitably some kiddie clutter will find its way into the mix, and already, one concession was made in the kitchen. When they moved in, the pair took the doors off the cabinets, seeking more openness. It was good incentive to keep things organized, notes Marni. “But we’ve put them back now to hide the plastic baby bottles.” That’s cool, though, because this house is all about embracing continuity and change. Its former owners built on history with architectural integrity, incorporating both rigor and whimsy, and Marni and Marcus have likewise made it their own, mixing modern and traditional furnishings with an eye toward family comfort. And as a good photographer knows, the beauty is in the contrast, and the fun is in seeing what develops.

Opposites Attract His style’s more traditional, hers is more mod. Here's how the Durlachs married the two sensibilities together: