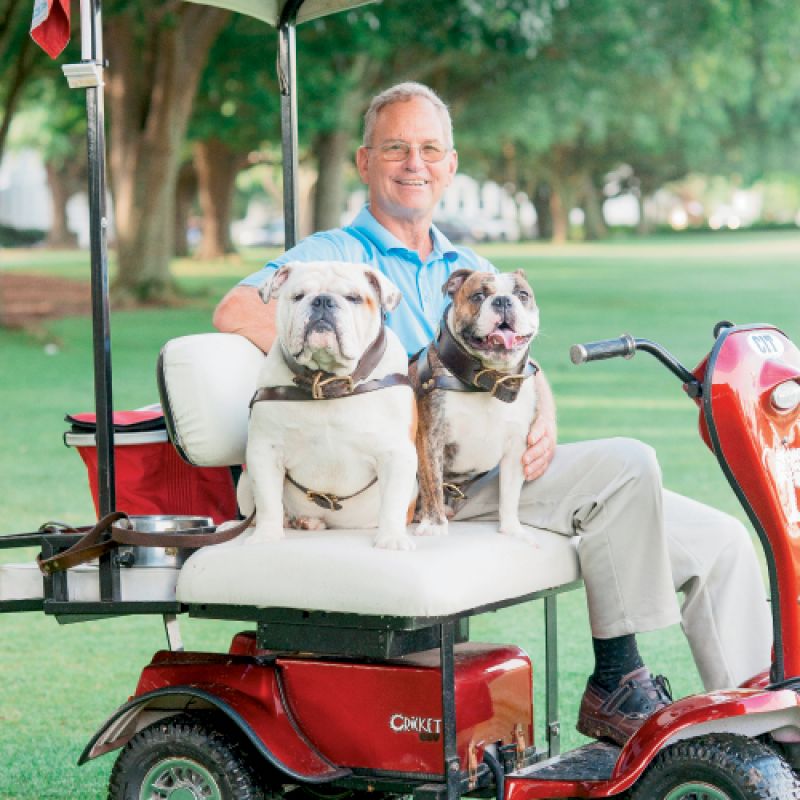 Mike Groshon, The Citadel’s assistant athletic director for facilities and equipment, wasn’t naturally drawn to bulldogs. After 22 years at his job, when the graduating seniors of 2003 suggested starting an official mascot program as a class gift, Groshon shot down the idea three times before giving in. He had a Boykin spaniel and a Labrador retriever trained to stay put on his golf cart while he rode around campus, and the last thing he wanted was a “bullheaded animal.”

Eleven years later, there are four English bulldogs living at his house on campus. “Talk about winning you over,” Groshon laughs, citing both the unexpected energy and intelligence that he soon discovered bulldogs can possess. “These are the best darn dogs I’ve ever had.”

Dating back to 1908, The Citadel’s mascots historically have been privately owned, mostly by alumni who brought them out to football games. But ever since Groshon’s change of heart in 2003, “General” and “Boo” have belonged to the college and been cared for by Groshon. The original pair retired last year, making way for General II and Boo X (there were eight Boos before the current bulldog program began).

The veteran mascots mentored the puppies throughout last fall’s football season, demonstrating when to bark at the opposing team and how to hold your ground and not run away when the college fires its cannons. When they’re not on the field or out at charity events, the pooches enjoy oversize, air-conditioned dog house “barracks” and, during summer, regular ice baths.

When school is in session, Groshon lets the duo ride along on his golf cart to greet cadets and visitors with sloppy kisses (no doubt a happy moment in the otherwise stringent daily life of a Citadel knob).

“They’re ambassadors of the school,” he proclaims. “They represent the very best of The Citadel; we don’t want a mean dog to be our mascot; we want a friendly bulldog.”