Building a Future
May 2009
WRITER:
Melissa Bigner
PHOTOGRAPHER:
Jörg Meyer
As graduation for the inaugural class of the American College of the Building Arts approaches, the students share the challenges and triumphs of their four-year journey from apprentices to craftsmen, bridging old-world skills with modern careers at the only such institution in the country 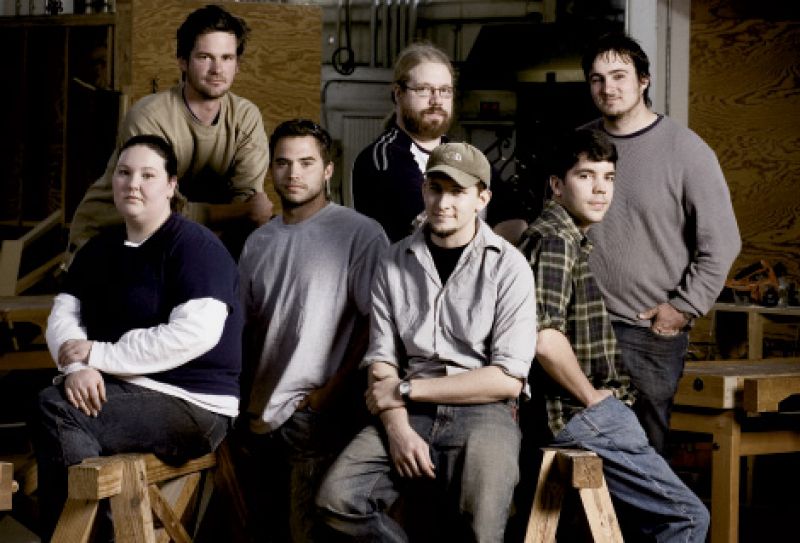 In 1998, a group of preservationists led by John Paul Huguley formed the School of the Building Arts (SOBA) here in Charleston. The mission? To train a new generation of master craftsmen in old-world skills—blacksmithing, carpentry, masonry, plaster, timber framing, and stonework. Operating from a home base in the 1802 Old City Jail, the school’s workshops grew until its founders’ dreams of creating a college were realized in 2004.

A year later, 15 students entered the jail-ground campus as the first class of the American College of the Building Arts (ACBA). The only such institution in the U.S., the school modeled its curriculum after the 600-year-old French organization Les Compagnons du Devoir, blending liberal arts classes and hands-on shop experience with apprenticeships and “experiential weeks,” during which visiting professionals led students in building projects. Challenged mentally, physically, and sometimes financially, the class winnowed down to seven students in its second year—including only one woman and a sole carpentry major. This month, those seven receive their bachelor’s degrees.

On the eve of graduation, the Class of 2009 reveals how being America’s first-ever building arts college graduates has shaped their lives and what their aspirations might mean for the future of architectural preservation.

Timber framers hew wooden beams and join them with pegged mortise-and-tenon joints, meaning the resulting structures are supported and held together by wood and physics alone—nary a nail is used in this type of construction

Path to ACBA:
“I went to the College of Charleston for two years and studied business. I just wasn’t mature enough for it. I worked for a little bit in construction and then started a little valet company. I like to build stuff, so when I saw an ad in the classifieds for an apprentice back when it was still SOBA, that word caught my eye—apprentice.”

Biggest Challenge:
“How to frame a roof. Timber framing is not regular construction, where you just butt two pitches together. In timber framing, you actually cut the hip so the rafters sit inside it. It creates all these angles and is really complicated.”

Proudest Achievement:
“My grades. I have something like a 3.6 and that’s made me feel really good about myself.”

Post-Graduation Plans:
“I plan to stay in Charleston and would like to work for a restoration company. Eventually, I’d like to get into new construction. But I’ve also thought about working for the National Park Service, because within parklands, there are tobacco barns, hill cabins, and millions of acres with structures on them that need work.”

ACBA Legacy:
“Working with these old methods and materials, we are helping to preserve living history. Someone’s got to know how to do this stuff. And some of us are creating a group called Civic Wrights. We’d like to be more involved in the community, with people in need, so the idea is that we’d work on buildings where people are drawn together—repairing and restoring community centers.”

Path to ACBA:
“I started off at University of Mary Washington in historic preservation. I thought I could come out of there with a degree and then could go and restore old buildings. But to them, hands-on was going to a building, looking at it, and writing a report. That’s not exactly what I was looking for. Then I attended The Island School of the Building Arts in British Columbia, where I focused on timber framing and log building during a three-month course. I loved it. After that, I thought I knew everything. I was sending out my résumé when a family friend told me about ACBA. I applied, got in, and realized that I really knew nothing!”

Proudest Achievement:
Building a Leonardo da Vinci replica bridge in Tours, France. “It’s a two-story bridge: the bottom layer is for horses and carriages, and the top layer is for pedestrians. The guy I was working with spoke no English at all, and I spoke very little French, but by the end I could say, ‘Hand me the drill.’

ACBA Legacy:
“In the first four years we’ve changed a lot of things here at the school. You’d go in one day and a class that was set up one way would have changed because it wasn’t working. I think it’s good that the school changes like that—an institution like this has to evolve.”

Post-Graduation Plans:
“With a bachelor’s degree—one of my major reasons for coming here—I can go anywhere. I can work at a design firm or for a timber-framing company.”

Extracurricular Project:
Buying an 1852 house downtown with his parents and restoring it with other students

Path to ACBA:
“I’ve been building wooden boats since I was 12 years old and always loved working with wood. After high school, I had been taking engineering classes at Trident Tech and saw the ad offering degrees in trades here; after that, engineering was on the back burner.”

Biggest Challenge:
“Being the first class at ACBA has been a challenge in itself. We’ve taken on leadership roles to help the school grow and be successful. At established schools, you follow a set path; here, we’ve helped to create it.”

Greatest Lesson:
“I’ve learned not to be afraid to do something just because no one else has done it.”

Path to ACBA:
“I took an eight-week stone-carving workshop at the School of the Building Arts in 2004. After that, I took business administration classes at a community college and didn’t really like it. So I came back to SOBA in 2005, when it became a college.”

Biggest Challenge:
“The hardest thing was the transition from studying business administration to trying to get that sense that people who use their hands have—that sense of seeing things a little differently and visualizing them. Then one day, I remember, things just clicked.”

About His Mentor:
Adjunct professor Darryl Weiser. “He was in log work in the ’70s and then got into timber framing. It’s a different approach to building, and he’s just a wealth of knowledge. Darryl’s got a really simple approach, and he’s really patient.”

Proudest Achievement:
Building a residential timber-frame structure with Will Denton during a summer internship for Holman Brothers. “It was octagonal and really, really nice. It was also the hottest I’ve ever been. Up there on a bluff in Monroe, Alabama, overlooking Lake Wadowee, it was like the surface of the sun.”

Post-Graduation Plans:
“I’d like to stay in Charleston and start my own construction business.”

ACBA Legacy:
“The way houses are built now, they won’t last for more than 50 years. It’s unbelievable how things have gotten off track. People will start to see that building better—not bigger—will help.”

Proudest Achievement:
Going overseas for the first time for a summer apprenticeship. “I don’t speak a lick of French, but I survived.”

Post-Graduation Plans:
“I’d like to travel as an itinerate timber worker and work for different shops across the country to see how they do things, because one day I’d like to have my own company.”

Blacksmith students heat iron bars up to 2,500 degrees, then pound them into ornate designs; it’s not a trade for the faint of heart—or body

Path to ACBA:
“I came to the first open house and loved the blacksmith program. I was totally green but decided to give it a year. After the first couple of weeks, I felt like I could do it the rest of my life.”

Greatest Lesson:
“You can be taught something that you never thought you could learn.”

ACBA Legacy:
“In the recent past, preservation has been difficult because a lot of buildings haven’t been restored how they should be. You can’t blame anyone—the workforce hasn’t necessarily known the traditional ways of restoration. But when we have more people in this country doing quality restoration work, it will be easier for preservationists to get their jobs done.”

Biggest Challenge:
“I came from a shop where the work we did on cars had to be showroom quality, where every square millimeter had to be so precise, so perfect. So my biggest challenge here has been learning it’s the inherent flaws in ironwork that make it beautiful.”

Greatest Lesson:
“Here in America, if we learn something, we tend to hoard it and think, ‘If I know how to do this and others don’t, then people will come to me for it.’ At school here, they teach us to figure things out and then tell everyone else about it, to pass it on and share what we learn.”

Favorite Project:
A bronze and gold-leaf mirror he crafted while apprenticing with La Forge de Style in New Jersey

Path to ACBA:
“In my second year at Union University in Tennessee, I got involved with the art department and was leaning toward sculpture, but there wasn’t any wood. I knew I wanted to work with wood because of my carpentry experience in high school. A friend of mine (who’s now my wife) told me about ACBA. My dad said, ‘You’ll never know if you don’t try,’ and I thought, ‘Why not?’”

Biggest Challenges:
“Working on my perfectionism and being the only student in my major.”

About His Mentor:
Carpentry professor Mikael Letendard. “I am one-on-one with Mikael all the time and have a very high regard for him. The quality of my work has gone up. Now the third-year students come to me. I know that before I had Mikael working with me, I couldn’t deliver at that same level.”

Proudest Achievement:
“I’ve focused on fine joinery and millwork, so I made two oak panel doors with mortis-and-tenon joinery. They are quite heavy, but they turned out really good.”

ACBA Legacy:
“By coming here, we’re trying to improve our trades for ourselves and for everybody else. It’s not just about me getting a better job, it’s for everybody.”