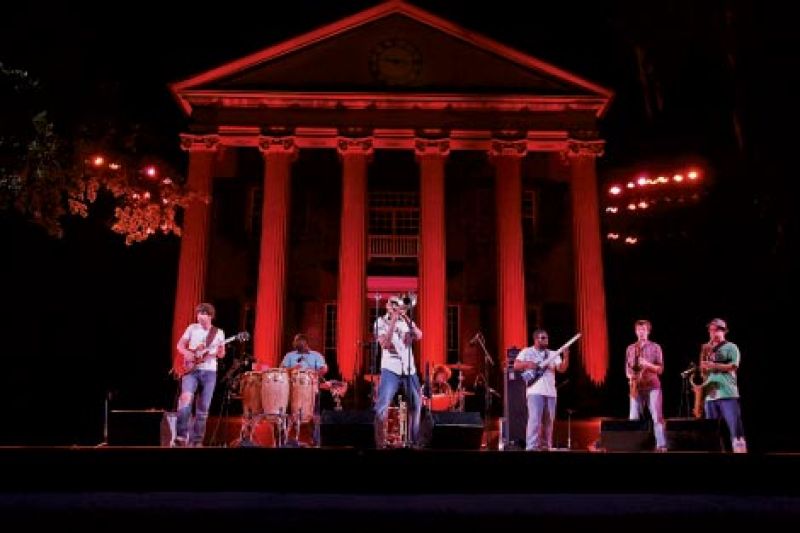 If you’ve been to a Spoleto jazz concert, you’re familiar with Michael Grofsorean. The longtime director of the festival’s Wells Fargo Jazz Series—who’s become known for drawing sell-out crowds to see new, unheard-of artists—offers an enthusiastic introduction for each act before they take the stage, building the palpable excitement.

What the audience doesn’t hear are the conversations Grofsorean has with each performer between picking them up at the airport and reveling in the after-show buzz. It’s in these heart-to-hearts that musicians fully grasp the meaning of a Spoleto appearance, many ultimately delivering best-of-career performances. “The artists sense from every festival person they meet—including audiences—that we’re thrilled to have them in Charleston. It makes a difference,” says Grofsorean.

Also making a difference is the fact that he helps ensure all logistical issues—from technical problems to transportation—are smoothly taken care of, leaving the artists worry-free. “I feel like I’m a 350-pound offensive lineman knocking down everything in their way so they can go out and reach as close to their maximum potential as possible,” notes the Michigan resident who owns one-man management and booking endeavor Musica Extraordinaria.

It’s when the artists get off the stage that Grofsorean picks their brains for next year’s talent. “I don’t know what I’d do if I lost one of these notebooks,” he says of the spiral-bound troves where he collects performers’ recommendations. As Spoleto’s jazz curator since 1980, he’s compiled a lifetime of musical insight from some of the world’s most lauded artists.

The result of Grofsorean’s “ritual interrogation” is a jazz program that draws artists from around the world—and, in recent years, from a variety of genres. In fact, Brazilian singer Virginia Rodrigues,  also performing this year, bears significance as the first artist to break the constraints of traditional “jazz” in the programming. In 2001, after deliberating whether Rodrigues was appropriate for a jazz schedule, Grofsorean decided she was, settling on the reasoning that jazz is a cultural child of Europe and Africa, as are Brazilian, Cuban, and many other styles of music. The door was opened for today’s vast array of shows, from bluegrass to salsa.

“This music has a universal ability to speak to people worldwide. I look for lyricism, depth, and, if we’re lucky, a few moments of transcendence,” explains Grofsorean. “By that, I mean the chance that something will happen so beautiful that it feels like time has stopped. That’s what brings audiences back.”