At the Helm
July 2009
WRITER:
Ida Becker
The Spirit of South Carolina captain guides the tall ship and students’ onboard education. 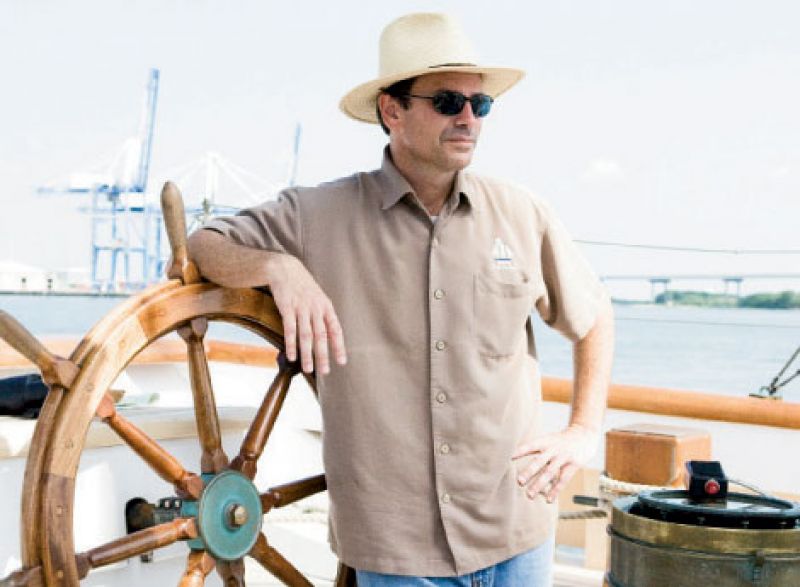 I got yelled at, did dishes, and hauled down lines,” recalls Spirit of South Carolina captain Tony Arrow of his first sailing experience as an apprentice aboard a windjammer toting vacationers along the New England coast. “At that point in my life, I was lacking direction and discipline, and I thought it was the coolest thing I’d ever done.”

A beach bum who spent his Silicon Valley youth surfing and tending bonfires in the dunes (sometimes in lieu of attending school), the then 20-year-old fell under the spell of the sail that summer while in Mystic, Connecticut — a 19th-century mecca for merchant ships and whalers. The seaport’s history-drenched maritime aura and impressive architecture was foreign to Arrow’s “suburban mall rat upbringing,” and it drew him in entirely.

With a seagoing appetite whetted by his stint of grunt work, Arrow approached the captain of the Mystic Clipper for another job. “I want to come back and do more dishes,” he told his potential employer during one of many off-season follow-up calls. His persistence paid off: despite a lack of topside knowledge, Arrow landed a spot on the water for the following summer. He spent 1985 and ’86 working under a Draconian captain who used rote instruction to train an able-bodied crew, albeit one with little cognitive understanding of sailing. Arrow filled the role of steward, a scrappy catchall position for some of the ship’s dirtiest tasks in the galley and on deck. “For a youngster like me who wanted adventure and excitement, it was perfect,” Arrow recalls. “It taught me not just how to work hard, but to work hard at a level I never had before—from 6:30 a.m. to 9:30 p.m., seven days a week.”

After a few summers worth of crew work, Arrow considered himself a seasoned schooner sailor, but a brush with nature’s fury dampened his assuredness. During a December delivery, for which Arrow and two other young men were hired to sail a yacht from Cape Cod to St. Thomas via Bermuda, the nascent crew was pitted against an unforgiving sea. A nor’easter demasted the vessel, which bobbed around for more than a day—with both the captain and other mate gripped with violent seasickness—before a Coast Guard helicopter rescued the men. “If we’d been an experienced sailing crew,” says Arrow, “even with that bad weather, we’d have been fine.” Arrow rattles off the lessons learned during that disastrous passage: Know with whom you are sailing. Know all preparation needs for the trip. Have a solid understanding of the weather patterns you’ll face while underway.

By then, Arrow had concluded that life on the water was his calling, but he needed deeper knowledge in order to make good judgments while at sea. Plus, it was time to truly learn the art of sailing. He joined the crew of the H.M.S. Rose, a majestic 18th-century Royal Navy frigate replica. Not only was the gargantuan square-rigged ship a rigorous and exciting sail (the Rose later appeared in the Academy Award-winning film Master and Commander), it exposed Arrow to onboard education programs. “Participation in a sail training program is literally a life-changing experience,” says Arrow, who observed an evident impact on youth. “It puts kids in a place where they are compelled to think about more than just their own perspective; they learn to be part of something bigger.”

Education became the true north of his wind-powered wanderings, eventually pointing him toward Charleston, where local shipwrights were completing construction of the Spirit of South Carolina, a 140-foot, two-masted sailing school vessel. Buoyed by Arrow’s experience at the helms of more than a dozen famous tall ships, the South Carolina Maritime Heritage Foundation coaxed him to town. He arrived on a wave of praise from well-respected people within the national sailing community. The interview was a convergence of two dynamically established sailors—Arrow and the foundation’s executive director, Brad Van Liew, who won the 2002-03 Around Alone solo yacht race—each with dramatically different fortes.

It didn’t take long for Arrow to size up the ship’s 2007 launch, and today the Spirit is an autonomous part of the foundation according to Van Liew. “Tony made us take out modern conveniences because he wants the kids to have a real experience. We don’t have an automatic anchor; students have to haul it in by hand, and it can take them awhile,” he says with a chuckle.

Arrow finds the process hugely uplifting as collaboration and cooperation replace dependency upon iPods and cell phones, which are banned from the ship. “We try to orient students in a way that is not too overwhelming,” Arrow explains. “Then we stand back for a few days and allow them to fall into their roles.”

With steadfast calm, he controls the boisterous activity onboard and adeptly manages a nine-member professional crew. Foundation board president Hank Hofford praises Arrow as the foremost captain of an American tall ship under sail today: “His special talent is working with kids of all ages, letting them run the ship and learn in a safe, adventurous environment.”

And with a mischievous funny side brought out by his favorite onshore hobby—improv comedy classes at Theatre 99—Arrow makes an even stronger connection with the youth on board. “He has a delightful sense of humor,” attests Penn Hagood, a history teacher at Ashley Hall who coordinates the school’s involvement with the Spirit of South Carolina Leadership Program, which enables 18 students and three teachers to participate in a year-long program that is capped off with a 10-day offshore experience.

“It is a life-changing event for our students,” says Hagood, whose daughters have also sailed with Arrow aboard the Spirit. “They come back so enthusiastic about the whole adventure, so amazed at their ability to accomplish things they never thought they could.” Although Hagood calls Arrow a gentle spirit, she points to his strict code of responsibility as the cornerstone of the ship’s success. “Safety is the utmost priority for Tony,” she explains. “He makes the students understand how serious it is on the boat—how this is the real world, not a classroom—and anything can happen.”

The quixotic nature of teen sailors fuels Arrow’s passion for sail training programs, because they are “still learning about life and have the capacity to see and experience things that will really affect the way they interact with the world.” He likens the high schoolers’ onboard experience—during which every participant must become an interactive cog in order for the ship to sail smoothly and safely—to a microcosm of positive society.
Despite witnessing an assortment of offshore wonders, including orca whales, spinner dolphins, and bioluminescent fish, Arrow considers the fortitude of novice sailors to be the most rewarding thing he’s seen while at sea. “When 15-year-olds understand the dynamic tension of a jib sheet in 25 knots of wind and deal with it responsibly and accurately,” he says, “it’s pretty magical.”