A Sullivan’s Island 4th of July 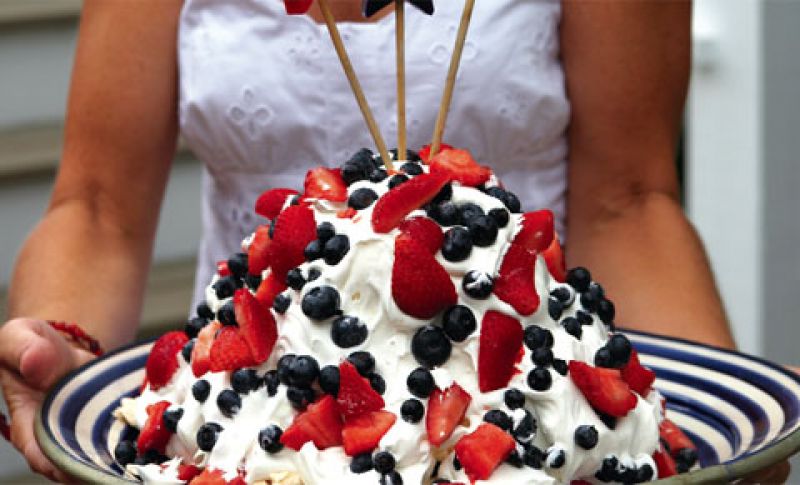 {MENU} Pimiento Cheese Biscuits “The Bomb” Happy Birthday America Cake Eric Dodson has seen his share of patriotic celebrations. The retired fighter pilot grew up on military bases on all points of the globe, having been raised by a father who flew fighter jets for the Air Force. “My brothers flew too,” adds the father of four, once honored with the Silver Star for valor during Operation Desert Storm. “In these various military communities where I lived, we celebrated the Fourth of July with family parades.” So five years ago, when he and wife Hannah moved their family to the Lowcountry from Columbia (where Eric piloted F-16s for the South Carolina Air National Guard) they sought out a similarly tight-knit community and settled on the Mayberry-by-the-Sea town of Sullivan’s Island—a good bet for their brand of real-deal Americana. “We’d visited friends on Sullivan’s Island every Memorial Day for ages, and we loved it,” smiles Hannah. At first a bit flummoxed by the high real estate prices, the Dodsons set out to find a fixer-upper, “a diamond in the rough,” Eric laughs. A 1960s-era ranch-style home popped onto their radar at a time when “the town was just about to change the codes to make them much more restrictive in what you could do to renovate a house,” Eric recalls. “So we had to move quickly.” Fortunately, Hannah, an attorney, also has an excellent eye for design, and her ideas were transformed into architectural plans by the mayor at the time, Carl Smith. “We replaced the brick siding with wood, elevated the entire house, added dormers and porches, and knocked down a lot of interior walls,” explains Hannah. “Basically, what’s left of the original house is the footprint.” The result is an airy, welcoming, open home with plenty of room for children to play and neighbors to linger. With their renovation complete in late 2004, the pair shifted their efforts toward building the kind of Independence Day traditions which Eric considered requisite for honoring the nation’s birthday. “I wanted my children to have the same experiences I had on this holiday,” he says. What began as a small, makeshift parade and morning gathering has grown to more than 50 families, with island local Governor Mark Sanford even dropping in with his clan. And while the size of the celebration has evolved over the years, the protocol remains: golf carts, sporting red, white, and blue finery, line up bright and early for the parade, just around the corner from the Dodsons’ house. Then, at 9 a.m., the posting of the colors begins, led by Tucker Dodson, 11, a Fourth of July baby who retains the role as bearer of the American flag. In line with him are three more young revelers, one carrying the South Carolina flag, and two others armed with wooden guns crafted by Eric to serve as color guards. Next up, the crowd belts out the national anthem in unison, and the parade sets off down the block in a swirl of march music, flag waving, and children dressed in their patriotic best. Several blocks of the spectacle conclude at the Dodsons’ backyard—once part of the Fort Moultrie parade grounds. Long past its days of hosting military drills and training exercises, the property now serves up lemonade and ice cream from old-fashioned wooden storefronts repainted year after year by the Dodson children. Befitting of the host, a four-foot model airplane performs a fly-by from the roof down a string across the wide backyard, signaling that the games are about to begin: water balloon tosses, three-legged races, and sack races for kids and adults both. Asked whether the five-years-and-counting progression from small-time bash to all-out carnival lends proper tribute to the holiday, Eric quotes words John Adams wrote in a letter to his wife shortly after signing the Declaration of Independence; Adams said that the Fourth of July should be celebrated, “by succeeding Generations as the great anniversary Festival…by Pomp and Parade, with Shows, Games, Sports, Guns, Bells, Bonfires, and Illuminations….” Adds Eric: “This country has provided my family with more opportunities than I could ever have imagined. We are extremely proud to be Americans.”